‘Netflix is NOT playing around!’ Royal fans go into melt-down online as The Crown’s dramatic trailer for series five is released – despite backlash over storylines covering royal family’s turbulent 1990s

The Crown fans have gone wild online after Netflix released the very explosive trailer to the royal drama’s much anticipated fifth series.

Dominic West and Elizabeth Debicki square off as King Charles and Princess Diana in the drama-packed trailer for the show, which will span the 1990s, including Queen Elizabeth’s Annus Horribilis.

The trailer debuted Imelda Staunton as the late Monarch reacting to the Windsor Castle Fire of 1992, and suggested the show would re-enact the lead up to Diana’s Panorama 1995 interview.

Fans were sent into a meltdown after the streaming service released the trailer for the show this afternoon, promising it was ‘the beginning of the end.’

The trailer comes as The Crown has been criticised for still going ahead with the controversial series – which will discuss King Charles’ love affair with the Queen Consort – after the death of Queen Elizabeth on September 8. 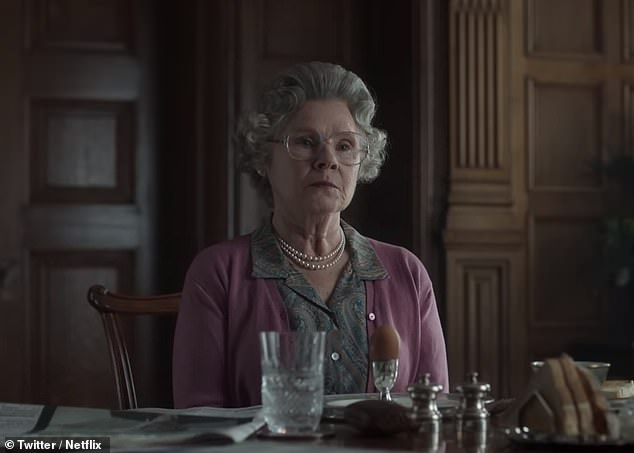 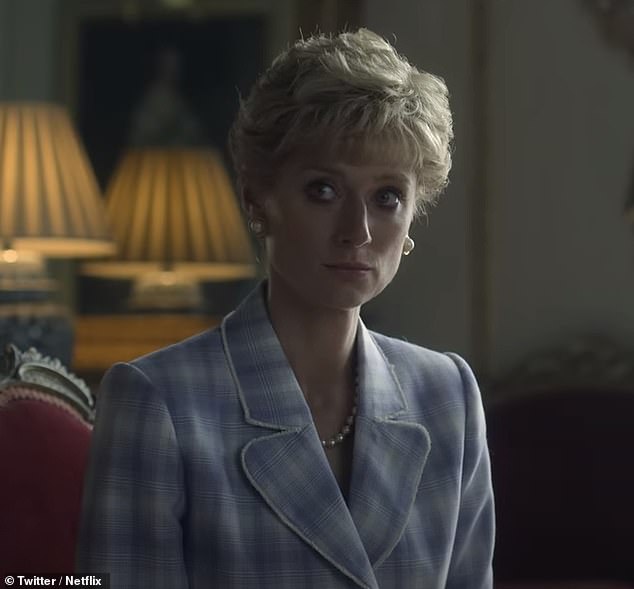 But for fans of the show, the trailer was cause for major excitement, with one writing: ‘Netflix is not playing!’

‘Sweet baby Jesus and the grown one too,’ another said.

‘Princess Diana you will always be famous,’ another shared.

‘I cannot wait for this to become my personality when it drops,’ another wrote in all caps. 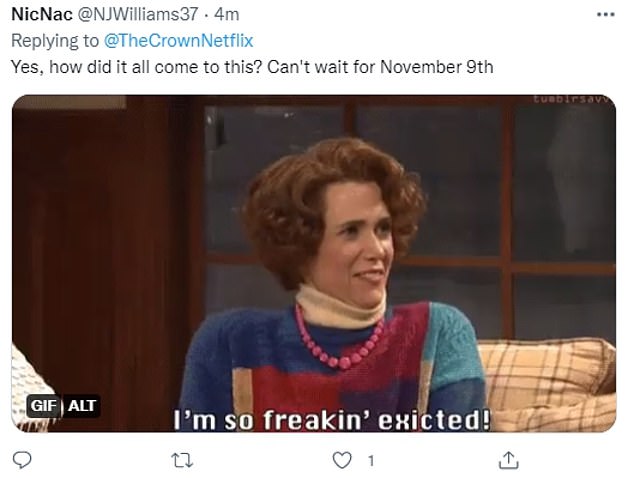 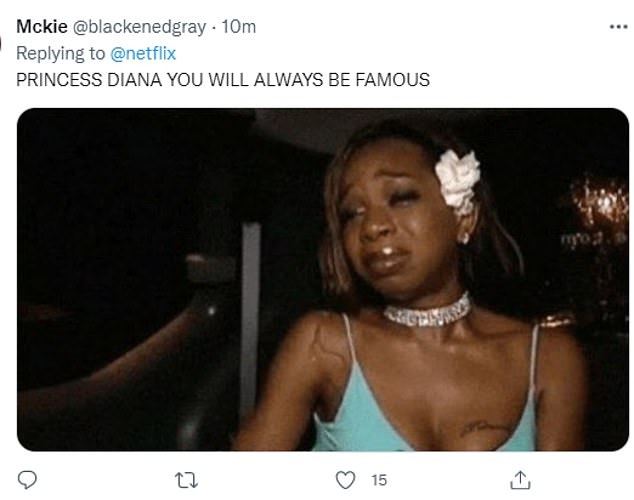 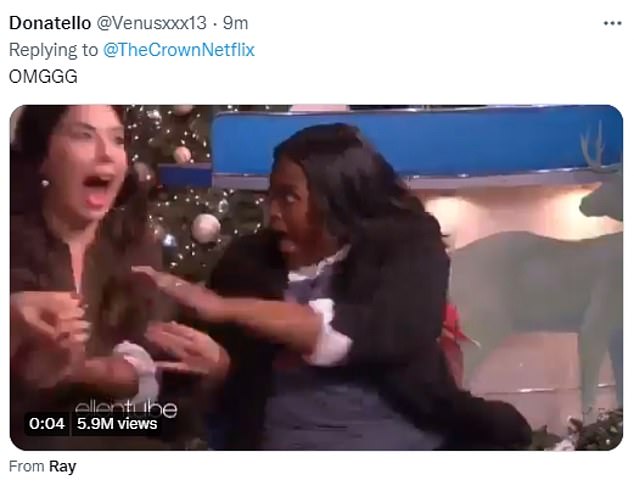 ‘Can’t wait for November 9th,’ one wrote, referring to the date of the new series’ release.

The trailer hinted that the show would delve deeply into the demise of King Charles and Princess Diana’s marriage, and their very public fallout.

This includes the very controversial interview Diana gave to BBC journalist Martin Bashir for Panorama, where she famously said ‘there are three people in this marriage.’

Meanwhile, the trailer debuted with the great fire of Windsor Castle from 1992, where several royal family treasures were lost in flames. 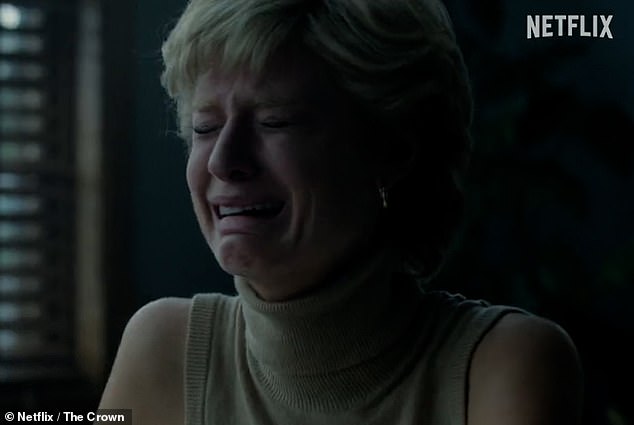 It’s tough times ahead for Princess Diana in the trailer for series five of The Crown, as the show will delve into her and King Charles’ public divorce

The Crown TRAILER: Shock new teaser shows Diana screeching to a halt in car chase scene and in skimpy swimsuit as she floats in a pool as Royal Family is ‘plagued by scandal’ in most controversial series yet

A brand new trailer for season five of Netflix’s The Crown has shown the royal family in crisis during the new episodes, detailing the events leading up to Princess Diana’s 1997 death.

The sneak peek shows Elizabeth Debicki, who portrays the late Princess of Wales, whizzing away from paparazzi as she drives at full speed in a tense car chase scene.

Being released on November 9, another scene from the new season displays the character floating in a pool in a skimpy swimsuit – as she battles the crisis of royal protocol and family scandal in front of the nation. 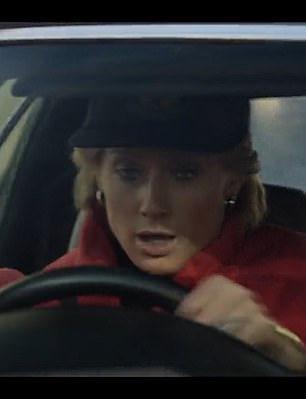 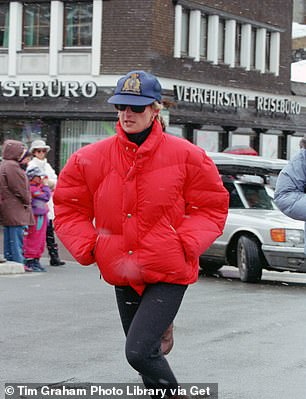 The Crown TRAILER: Shock new teaser shows Diana screeching to a halt in car chase scene and in skimpy swimsuit as she floats in a pool as Royal Family is ‘plagued by scandal’ in most controversial series yet

‘I never stood a chance’: The new trailer shows Diana in a skin-baring simwsuit as she floats in the water while appearing at a loss

Over the first three series of The Crown, the Netflix hit has become well known for bending facts to suit its narrative, and while some artistic license is inevitable, some critics have been outraged in its rewriting of history and relationships.

But in it’s most controversial series yet, the brand new trailer declares that the ‘royal family is in genuine crisis’, as it depicts at-the-time Prince Charles and Diana’s divorce.

Actress Elizabeth’s voice can be heard explaining that Diana ‘never stood a chance’ in the trailer, as shots show the royal whizzing down a street while driving a black car at high speed to avoid paparazzi.

The dramatic scene shows an overwhelmed Diana at the wheel, donning a red puffer jacket as she struggles to keep control of the wheel.

Revenge dress: It also documents the iconic moment Diana stepped out in her famous ‘revenge dress’ at the 1994 dinner at the Serpentine Gallery in Kensington Gardens.

Nailed it: Originally designed by Christina Stambolian, the dress was off the shoulder and featured a royal-rule breaking hem – with Elizabeth looking the spitting image of the late royal in the new scenes

The forthcoming season five will document the events leading up to Diana’s death, but won’t reveal the tragic incident until season six -with it recently being revealed that the 1997 car crash which led to her death won’t be shown in the season.

Dubbing the fifth season as ‘the beginning of the end’, the new trailer shows Diana in a skin-baring simwsuit as she floats in the water while appearing at a loss.

It also documents the iconic moment Diana stepped out in her famous ‘revenge dress’ at the 1994 dinner at the Serpentine Gallery in Kensington Gardens. 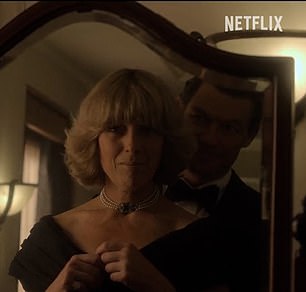 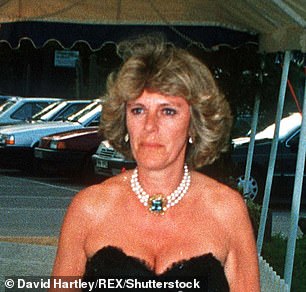 Misunderstood: An upset Diana is seen at the side of the pool, with a voiceover sharing that ‘People will never understand how it’s really been for me’

Originally designed by Christina Stambolian, the dress was off the shoulder and featured a royal-rule breaking hem – with Elizabeth looking the spitting image of the late royal in the new scenes.

The dramatised trailer shows the royal family declaring that Diana ‘wants to bring down the temple’, before depicting her famous interview with BBC journalist Martin Bashir, played by Prasanna Puwanarajah.

Netflix used a dramatised recreation of Princess Diana’s bombshell Panorama interview with disgraced BBC journalist Bashir to advertise their new series of The Crown today – despite Prince William’s demands that the interview be taken off air.

The fifth season of the streaming giant’s popular series The Crown will include an entire episode focusing on the Royal’s controversial sit-down with Bashir in 1995, in which she sensationally said ‘there were three of us in the marriage’ – a reference to Charles and Camilla.

The interview, originally broadcast by Panorama, has since been debunked after it was revealed interviewer Bashir gained access and trust of Diana using falsified information. 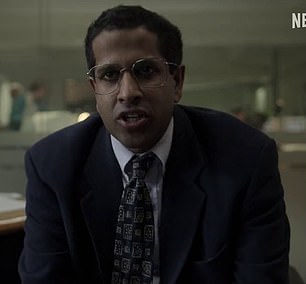 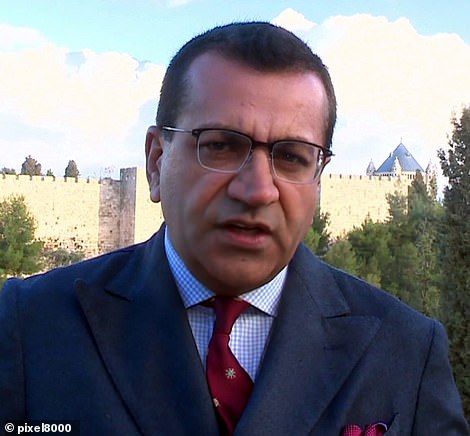 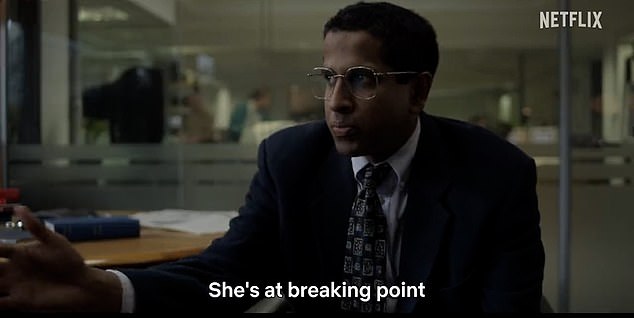 Breaking: It also shows journalisy Martin declaring that Diana is ‘at breaking point’ 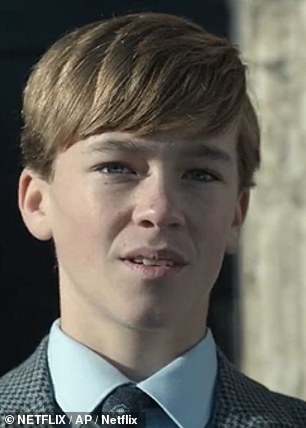 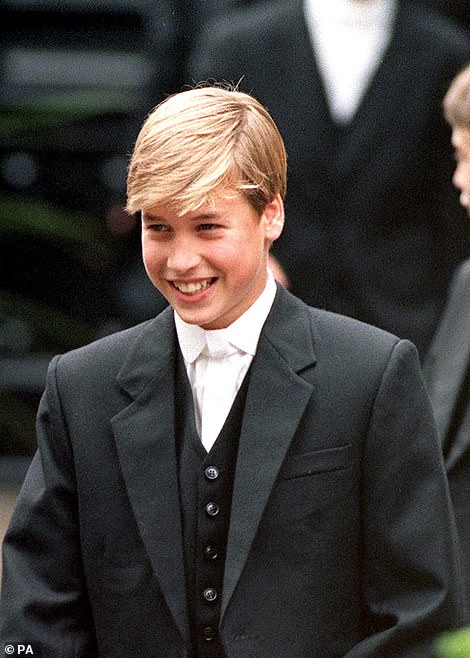 Timothee Sambo  (pictured left) portrays an uneasy-looking Prince William as he stands in front of the world’s media in the Netflix trailer for series five of The Crown. He pastes on a smile before looking overwhelmed by the occasion

It was watched by 23 million people. It is thought to have contributed to her divorce from Prince Charles in 1996 – a year prior to her fatal car crash in the Tunnel de l’Alma in Paris.

Bashir showed Diana’s brother, Earl Spencer, false bank statements which suggested his former head of security had been receiving money from tabloids and the security services to spy on his sister.

However, the decision to recreate the Panorama interview puts Netflix at odds with William, who called for the groundbreaking scenes to never to be aired again.

In the trailer, Diana can be seen sitting down with Bashir, while a voiceover says: ‘I won’t go quietly.’

Charles, portrayed by Dominic West, can also be seen with Olivia Williams’ Camilla Parker Bowles, with the trailer showing an intimate moment between the pair.

While in one shot, the family is pictured smiling outside a house as camera crews shout from outside the property and cameras flash in their face, with a young Prince William, played by the 12-year-old actor Timothee Sambor, grimacing as he puts on a smile.

Johnny Lee Miller, who portrays former British Prime Minister John Major, says in the trailer: ‘It feels it’s all about to erupt’. 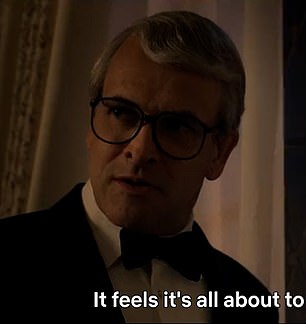 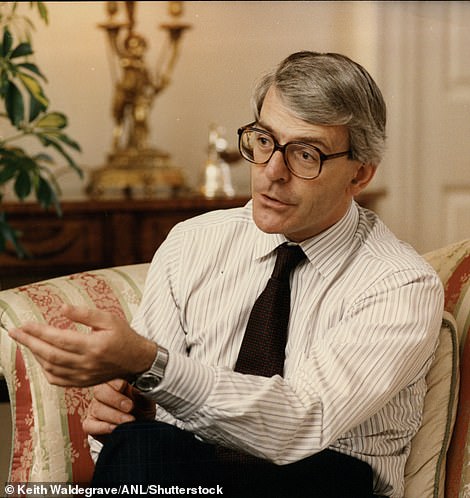 Johnny Lee Miller, who portrays former British Prime Minister John Major, says in the trailer: ‘It feels it’s all about to erupt’. 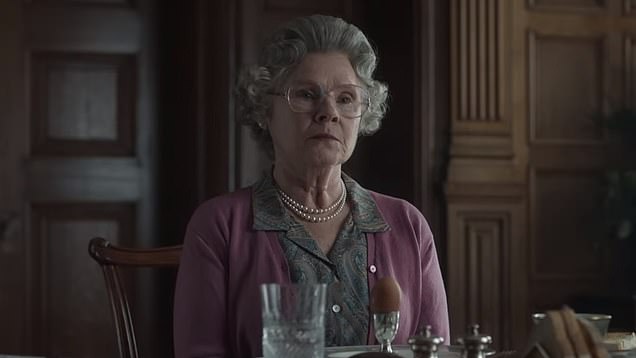 It was announced last year that Elizabeth would take over from Emma Corrin and play Diana for the fifth and sixth series, which will cover Diana’s death in 1997.

The actress said of her casting last year: ‘Princess Diana’s spirit, her words and her actions live in the hearts of so many. It is my privilege and honour to be joining this masterful series, which has had me absolutely hooked from episode one.’

Meanwhile  Dodi Fayed is expected to play a large part in the next series of The Crown, with British actor Khalid Abdalla, 39, who starred in the 2007 film The Kite Runner, cast in the role.

The final two series of The Crown will cover the Royal Family’s history throughout the 1990s and into 2003, however it is not yet know which moments will be seen.