The Big Turn-off: It’s a startling fact, Fewer than half of us now make love at least once a week. Here two women admit how their sex lives have waned… thanks to an intruder in the bedroom

Startling new research suggests we’re having sex less and less frequently. The statistics published yesterday found that among Britons aged 16 to 44, only 41 per cent are having sex at least once a week — while almost a third, 29 per cent, had no sex in the past month at all.

The situation is particularly dire among married and cohabiting couples over 35, who can expect roughly half the sex they might have enjoyed a decade ago.

The researchers suggested the rise of screen time — from streaming TV shows on Netflix to scrolling through Instagram and Facebook — may be a factor in our loss of interest. But can that explain the dramatic magnitude of the change?

Here, two writers whose love lives have suffered thanks to box-set binges explain how it’s affected them . . . 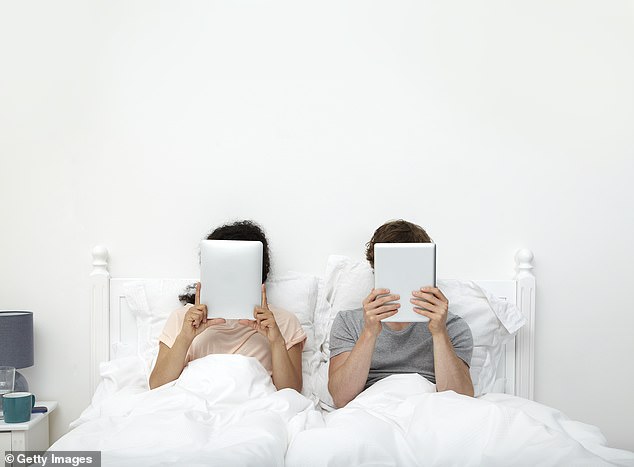 Startling new research suggests we’re having sex less and less frequently. The statistics published yesterday found that among Britons aged 16 to 44, only 41 per cent are having sex at least once a week — while almost a third, 29 per cent, had no sex in the past month at all (stock image)

WE’VE BECOME BLIND, DEAF AND DUMB TO EACH OTHER

Samantha Brick, 48, has been married to Pascal, 58, for 11 years. They live in the Dordogne, France. She says:

For the past four months, I’m ashamed to say there have been three of us in our marriage. This third party slowly crept into our lives, until suddenly I found it was them I was daydreaming about — and even snuggling down with in the evenings.

No, not another man, but Netflix.

Before I downloaded the streaming app, my husband, Pascal, and I made our evenings all about romance. Winter would see us curled up in front of a roaring fire, while come spring we’d sit outside on our sun-drenched terrace, sharing the cuddles that inevitably led to one thing or another.

But I’m ashamed to say we’ve not canoodled outside together once so far this year, despite the clement French weather.

The awful truth is that I’m more likely to be found with my iPad on my lap, headphones firmly in place and Netflix fired up.

While we’ve not sworn off sex altogether, our romantic rituals are a thing of the past. Before the app entered our lives, we’d have dinner around 8pm, then spend the evening on the sofa, snuggled up.

We’ve always enjoyed separate forms of entertainment — I’d read, while my husband would watch a film — but it felt cosy and communal.

How to switch the passion back on…

To bring back a spark to your relationship once more, start by putting limits on your use of smartphones, says Jo Hemmings, a psychologist and relationship counsellor.

We’ve got into bad habits that have eroded intimacy — creating firm boundaries when it comes to technology plays a crucial role in getting it back. She advises that couples:

And though it makes me blush to say it, things would take an amorous turn a couple of times a week, at least.

Now, when we do force ourselves off the couch and upstairs to sleep, it’s typically after 11pm.

Usually we’re both overtired and crotchety. More than once I’ve slipped into bed with a tablet in my hand to finish off watching something.

Unlike the rest of the world, I was a fairly late adopter of the online streaming service. I live in the middle of the beautiful countryside in Dordogne, and our internet signal wasn’t strong enough to watch a movie trailer, let alone a box set. When we finally managed to integrate super-speed wifi, I was delighted I could at last catch up on all the binge-worthy hits I’d missed out on.

Now I wonder if I wasn’t better off without them.

There is so much to watch that I’ve scheduled a viewing timetable. It doesn’t leave much room for early nights.

The problems began in earnest because we have very different tastes in entertainment. I’m a documentary fan. My husband isn’t. When he does watch something, it’s usually a film (unlike me, he lacks that single-minded obsession about seeing a series through to the end).

Our house is open-plan, so no matter where I’m curled up with my tablet, Pascal can hear it. A month in, he ordered me a set of headphones.

Far from gazing into each other’s eyes, we’ve become blind, deaf and (more often than not) dumb to each other. And you can’t feel a spark if you never make eye contact.

It’s all a far cry from where we were just a year ago.

Pascal and I married 11 years ago. When we met on holiday in southern France, it was as if we’d been struck by lightning; we fell instantly in lust.

Soon, I was jetting back and forth between France and the UK to spend every minute I could with him — most of them between the sheets. Watching television was the last thing on my mind.

During the newlywed years, we couldn’t keep our hands off each other, often with attendant romantic rituals of a hot bath, sexy lingerie and so on.

So prone were we to public displays of affection that we are fondly referred to by our neighbours as Les Amants (the lovers). Even in middle-age we’ve maintained an active sex life, unlike many married couples.

Yet since Netflix, everything has changed. It’s such an easy, quick hit: how can a husband compete?

Things came to a head a couple of weeks ago. I was in the kitchen making a cuppa, headphones on, eyes glued to the iPad.

Looking at me in dismay, Pascal cried: ‘This has got to stop!’

He pointed out we hadn’t spoken a word to one another most of the evening. Or the previous evening, or the one before that. 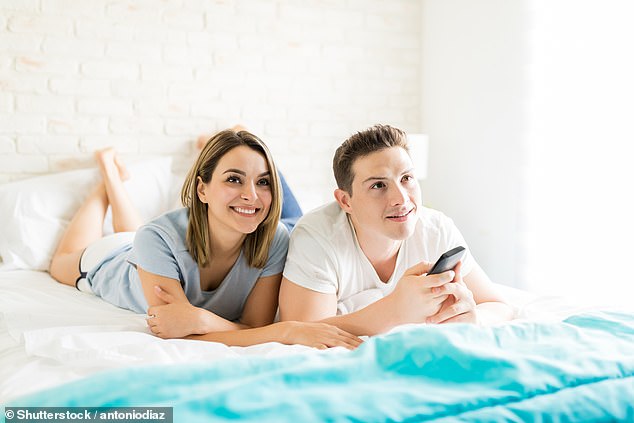 He hated the fact that we were more akin to flatmates than husband and wife; he missed me.

I felt very guilty, and knew his outburst meant our marriage was in danger of going off the rails.

Yet I know my behaviour isn’t unique. One friend of mine slopes off to bed at 8.30pm most evenings on the pretext of being able to work uninterrupted — only to be found watching re-runs of Friends.

Another claims to have insomnia and has moved into a separate bedroom; the truth is she’s overly competitive and wants to watch the new Netflix releases first.

But just because everyone’s doing it doesn’t mean it’s good or healthy for my marriage. Realising it was time to curb my habit and rekindle some of our old magic, we went away for some romantic couple time over the bank holiday weekend. And I only looked at Netflix once . . . or twice.

HE SPENT OUR BEACH BREAK ON HIS PHONE

‘Sex is like money,’ John Updike once said, ‘only too much is enough.’ So pity the poor people — like little old me — who, as this survey shows, find themselves utterly poverty-stricken when it comes to getting any at all.

I’ve spent the better part of this week reclining on a sunlounger half-naked in the Maldives, in a resort seemingly custom-built for amorous encounters, seething with frustration.

I came here with the sexiest man I’ve met in two decades, my new boyfriend, Roy, expecting near constant romance.

But instead he’s spent 50 per cent of his time asleep in the sunshine, 30 per cent glued to his phone or tablet and nearly all the rest indulging in relaxing baths. Not to mention the excruciating evening when he made me watch Manchester United draw 1-1 with Huddersfield Town.

I’ve tried to entice him, even getting into a scented bubble bath with him. (‘Wow!’ he exclaimed, ‘your bottom is so sunburned.’)

He only got worked up once, while trying to get his Apple hub to link to the TV so he could watch the last episode of Line Of Duty.

It’s all come as something of a shock. Certainly, ten years ago, when I was in my mid-20s, all the men I met seemed to be only after one thing. Which was depressing sometimes, but at least dependable. So what is to blame for this sad state of shenanigans? 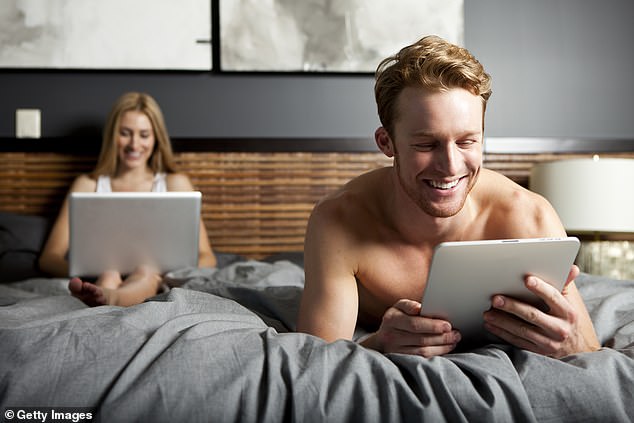 The situation is particularly dire among married and cohabiting couples over 35, who can expect roughly half the sex they might have enjoyed a decade ago (stock image)

My verdict is that men are all too busy staring at their smartphones, tablets and laptops to take an interest in the fairer sex.

Far more so than women, in my experience, men tend to consider their gadgets integral to everyday life, finding meaning and purpose in the apps that let them watch shows, message their mates and even deliver an extra frisson to their favourite sports by letting them place real-time bets with the swipe of a hand.

Sadly, the evidence suggests that men like Roy now find such diversions more stimulating than, say, my company.

‘There is a great deal of competition that a sexual relationship has to face,’ postulated Professor Kaye Wellings, who led the research. ‘In the digital age, there are more diversionary stimuli that can take up your spare time… smartphones, Netflix and social media are all likely distractions that may prevent intimacy.’

Essentially, instead of treating us as sex objects, British blokes really do want to ‘Netflix and chill’. This 2019 equivalent of ‘do you want to come in for coffee?’ should be a euphemism for sex, sex and more sex.

Unfortunately, Roy has taken it at face value. To him ‘Netflix and chill’ means: ‘Let’s sit on the sofa and watch the whole of Abducted In Plain Sight.’

Still, I know I am tremendously lucky to have him lying next to me — whether he’s tangling me up in the throes of passion or not.

Most of my beautiful, clever and sexy friends aren’t getting any romance at all, because the men they connect with on apps would rather scroll endlessly through other women’s profiles — or use their iPhones for WhatsApp chats with the lads — than ask them out on dates.

A friend of a friend recently messaged 50 men on the dating app Bumble, and not one could be bothered to write back.

As a nation, it seems, we’re getting much of our sex vicariously — through shows such as Sex Education.

One solution — perhaps — would be for Netflix to formulate a dating app of its own. It could pair up people according to their viewing preferences, and then strategically conk out just before bedtime.

For now, though, my plan is to slip into my negligee, chuck the remote in the plunge pool and sabotage the wifi connection.

The things we do for love, eh?