The U.S. government is using a little-known humanitarian immigration tool to allow some at-risk Afghans to enter the U.S. without visas, a move refugee advocates have supported for months, the Biden administration confirmed Tuesday.

Homeland Security Secretary Alejandro Mayorkas is granting “humanitarian parole” to some of the Afghans being evacuated from Kabul who don’t yet have legal permission to enter the U.S., a senior administration official said during a call with reporters.

Among those who could be granted parole are Afghans who assisted the U.S. war effort but whose Special Immigrant Visa (SIV) applications have yet to be fully adjudicated, the official said. Afghans allies with approved special visas can travel to the U.S. with their spouses and children.

While it remains unclear how many Afghans will benefit, the decision to use humanitarian parole could be a game changer for those trapped in the special visa program’s massive backlog of applications, as well as other vulnerable Afghans being airlifted from Kabul.

The move allows immigration processing for vulnerable Afghans to take place from within the U.S. While welcomed by refugee advocates and lawmakers across the political spectrum, many say the decision to parole at-risk families did not come soon enough.

The International Refugee Assistance Project (IRAP) called on the Biden administration to initiate large-scale parole processing back in April.

“It’s a really important tool to make sure that people can be in safety while the U.S. is processing applications,” Betsy Fisher, IRAP’s director of strategy, told CBS News. “We think it’s a really critical step, but it’s something we’ve been asking for, for a long time.” 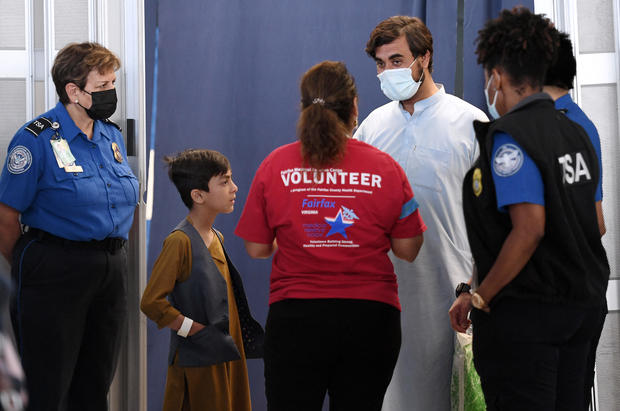 Those paroled by the U.S. government will receive work authorization, but lack the resettlement resources of those with refugee status. “People that are paroled have different access to services than those given to refugees,” Fisher said. “We’re really looking to the White House to engage with Congress on this issue.”

“Humanitarian parole does not come with a benefits package,” said Tom Warrick, a former U.S. State Department official who helped kickstart the special visa program during the Bush administration.

“Someone who comes here as a refugee, there’s essentially a standard suite of services and benefits that’s provided to that person,” said Warrick, now a senior fellow at the Atlantic Council. “But humanitarian parole is a stamped piece of paper.”

The decision comes as U.S. officials continue frantic efforts to evacuate Americans, third-country nationals and at-risk Afghans from Kabul’s airport, the only part of the capital not yet under Taliban control.

The senior administration official stressed Tuesday that all evacuated Afghans are being taken to U.S. military sites in Asia and Europe to undergo security screenings. Some Afghan allies who complete these checks are then being relocated to military bases in Virginia, New Jersey, Texas and Wisconsin.

Those taken to military sites on the U.S. mainland are being tested for the coronavirus, subjected to medical checks and provided temporary housing while caseworkers help them obtain work authorization and travel arrangements.

Individuals paroled by the U.S. government will be connected with refugee resettlement organizations, which will help them secure affordable housing and jobs, according to the senior administration official.

While the current plan is to house evacuated Afghans at four locations — Joint Base McGuire-Dix-Lakehurst in New Jersey, Fort Lee in Virginia, Fort Bliss in Texas and Fort McCoy in Wisconsin — the Pentagon is considering expanding its operations, the administration official said.

“The plan is not for people to be at military bases for months or anything like that,” the official added.

U.S. law allows border officials to grant parole to immigrants who would otherwise be ineligible to enter the U.S. if their entry serves a humanitarian cause or a “significant public benefit.”

While parole allows individuals to enter the U.S., it does not automatically qualify them for a green card or permanent legal status. Those with parole documents can typically apply for temporary work permits. 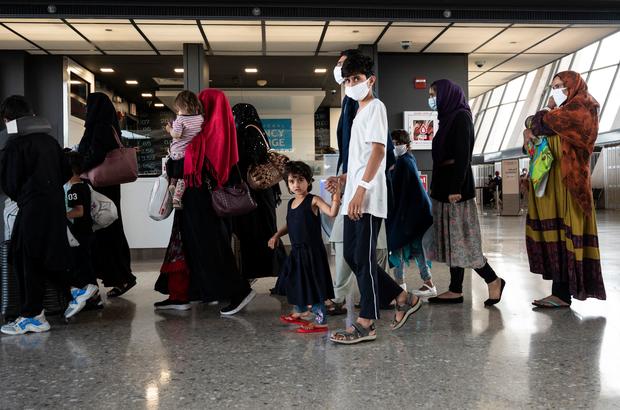 There’s historical precedent to using the parole authority during mass evacuations of refugees. After the fall of Saigon in 1975, the Ford administration paroled tens of thousands of Vietnamese refugees it evacuated so they could be resettled in the U.S.

In addition to those stuck in the SIV pipeline, parole could help other evacuated Afghans who are not eligible for the visas, including parents and siblings of SIV applicants, noted Amanda Demmer, a Virginia Tech professor who studies refugees and war.

“It postpones a lot of the procedural issues. It really speeds up the process and the number of people the U.S. can evacuate before August 31 will increase if people’s hands are no longer tied by procedural formalities,” Demmer told CBS News.

Representatives for the Department of Homeland Security (DHS) did not say how many Afghans have been granted humanitarian parole so far.

Resettling Afghans who aided in the American war effort has received rare bipartisan support. According to a CBS News poll released Sunday, 81% of Americans surveyed believe the U.S. should help Afghans who assisted U.S. forces, such as translators.

But the U.S. government’s mammoth effort to screen vulnerable Afghans comes amid a parallel crisis at the U.S.-Mexico border, where last month, interdictions of migrants and asylum-seekers reached levels not seen in over two decades. U.S. border officials encountered 19,000 unaccompanied children in July, an all-time high.

DHS has already dispatched personnel from Customs and Border Protection, Immigration and Customs Enforcement and the Transportation Security Administration to screen and vet Afghans at U.S. air bases in Bahrain, Germany, Kuwait and Qatar, the department told CBS News on Monday.

As of last weekend, more than 500 U.S. Citizenship and Immigration Services employees had volunteered to be deployed to process Afghans housed at the U.S. military sites.

“There’s a zero-sum aspect between refugees coming across the southwest border from the Northern Triangle and people coming in from Afghanistan,” said Warrick, the former State Department official. “The same people have to do the vetting. Up until now, the administration has prioritized the Northern Triangle. But all of those plans are being thrown into question by a need to process a very large number of people coming in from Afghanistan.”