THE UK economy grew 0.4% in February as lockdown restrictions remained – but it was still almost 8% below its pre-pandemic peak.

Gross domestic product (GDP) rebounded slightly from January's fall of 2.2%, according to revised figures by the Office for National Statistics.

🔵 Read our coronavirus live blog for the latest news & updates… 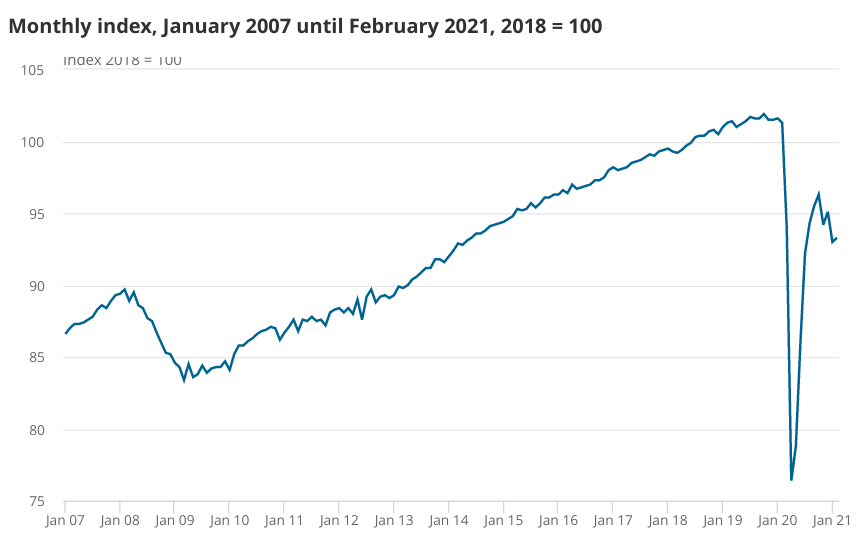 It comes after the UK economy bounced back more strongly than first thought in last six months of 2020 – but it was still down by 9.8%.

February's GDP is 7.8% below the levels seen in February last year, compared with 3.1% below the initial recovery peak in October last year.

The first major stage out of lockdown for businesses came yesterday as non-essential retail, hairdressers and gyms reopened.

What this means for your personal finances

GROSS domestic product (GDP) is one of the main indicators used to measure the performance of a country’s economy.

When GDP goes up, the economy is generally thought to be doing well although today's figures aren't strong.

The Bank of England (BoE) uses GDP as one of the key indicators when it sets the base interest rate.

This decides how much it will charge banks to lend them money, and is a way to try to control inflation and the economy.

So, for example, if prices are rising too fast, the BoE could increase that rate to try to slow the economy down. But it might hold off if GDP growth is slow.

The BoE cut interest rates twice in March due to coronavirus.

Base rate cuts means mortgage borrowers now typically benefit from lower rates, but at the other end of the scale savers earn less on their savings.

To measure GDP, the Office for National Statistics (ONS) collects data from thousands of UK companies.

A spokesperson for the ONS said: "The economy showed some improvement in February after large falls seen at the start of the year but remains around 8% below its pre-pandemic level."

"Wholesalers and retailers both saw sales pick up a little, while manufacturing improved with car producers experiencing a partial recovery from a poor January.

"Construction grew strongly after revised figures showed they had struggled in the last couple of months.

"Exports to the EU recovered significantly from their January fall, though still remain below 2020 levels.

"However, imports from the EU are yet to significantly rebound, with a number of issues hampering trade."