Check out what’s clicking on FoxBusiness.com.

Inside the kit were crucifixes, a pair of matching pistols, a brass powder flask, holy water, a Gothic Bible, a wooden mallet, a stake, brass candlesticks, rosary beads and police paperwork from the time, according to a press release from Hansons.

The items were enclosed in a box with two brass crucifixes on the lid, which are part of the box’s locking mechanism, the press release said.

The kit originally belonged to a man named Lord William Malcolm Hailey, a former administrator of British India, according to Charles Hanson, the owner of Hansons Auctioneers.

RARE MICHELANGELO DRAWING SOLD FOR MORE THAN $24M AT AUCTION

"Whether through fear or fascination, it’s interesting to know a member of the highest aristocratic social order, a man with a place in the House of Lords, acquired this item," Hanson said in the press release. "It reminds us that the vampire myth affects people from all walks of life." 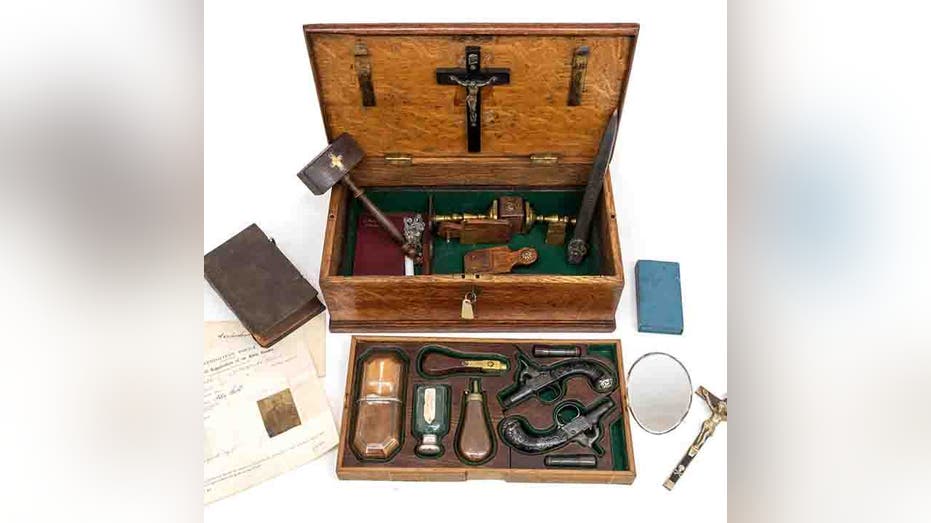 The items in the kit are stamped with Lord Hailey’s initials, the press release said.

"Belief in vampires, an undead creature said to need human blood to survive, goes back hundreds of years and persists in some parts of the world today," Hanson said. "They are enshrined in European folklore."

"The task of killing a vampire was extremely serious and historical accounts suggested the need for particular methods and tools," Hanson added. "Items of religious significance, such as crucifixes and Bibles, were said to repel these monsters, hence their presence in the kit."

"Bids came in from across the globe, including France, America and Canada – and the news story about the find went viral," Hanson said. "It made headlines galore as far afield as Australia and America. Objects like this fascinate both collectors and people in general – and this vampire kit had particularly interesting provenance."

In the end, the vampire slaying kit went to an unnamed private buyer from the U.K., according to the press release.