The WA government has rebuffed calls for an independent review of the coronavirus risks posed by the 7000 people who have entered the state with quarantine exemptions since the "hard border" restrictions were put in place in early April.

A heated debate in Parliament on Tuesday afternoon erupted in the wake of a number of high-profile cases of quarantine breaches, including two women who allegedly escaped from a hotel after arriving in Perth without an exemption. 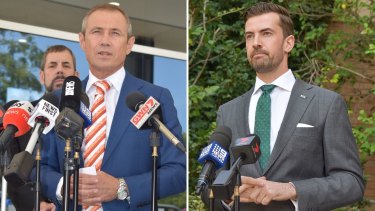 An inquiry into quarantine arrangements in Victoria on Tuesday revealed 99 per cent of cases of coronavirus in the state's recent outbreak were traced back to hotels.

WA Liberal health spokesman Zak Kirkup said 52 people a day had come into the state and were given a pass from 14-day self-isolation restrictions.

He called on the government to support an independent risk assessment of the 'hard border' quarantine arrangements.

"We know the devastating toll that COVID-19 leaves in its wake. Communities have been ruined," he said.

"We know governments across Australia have not been as prepared as they could be when faced with a second wave.

"We only need to look to the Labor government in Victoria to see what happened there."

"The hard border isn't hard. There's an open door where you can get an exemption and the quarantine is being breached," he said.

"It's not good enough to say 'trust us'. Daniel Andrews and the Victorian Labor government said 'trust us' when they put their hotel quarantine procedures in place and we see where that's ended up.

"It is sad and unfortunate and we don't want that to happen here."

Health Minister Roger Cook said assessing the risk of an outbreak was already part of the job of health officials and flayed the opposition over its changing position on border restrictions.

"I'm sure [Mr Kirkup] will forgive us for just being slightly irritable when you come to this place and say, 'we want to look over your shoulder', 'we want to check on how things are going'.

"Well, member for Dawesville, we have five active cases in this state, they are all in hotel quarantine. That's a pretty good track record."

Mr Cook said some exemptions to the hard border were necessary.