On a recent afternoon in southern California, three Australians responsible for one of the most wildly successful projects in music history gathered for lunch to raise a glass to the 40th anniversary of their greatest triumph. 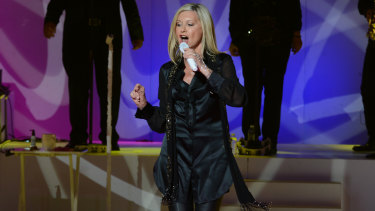 One guest was more famous than the others – a dame, no less, the title recently added to her long-standing household name credentials: Olivia Newton-John. With her were long-time friend John Farrar, the lad from Moonee Ponds, who found moderate international success as a musician and then spectacular success as Newton-John’s songwriter and producer; and Steve Kipner, a journeyman musician from Brisbane who in 1981 was trying to crack it big in LA – and who then penned a perfect pop song that conquered the world. 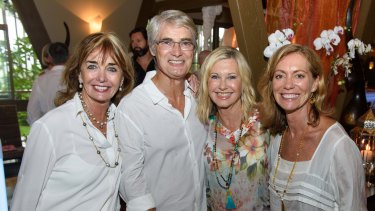 Olivia Newton-John with Pat and John Farrar, and Kerry Armstrong in 2015Credit:

Physical hit No. 1 in many countries including Australia and became a cultural phenomenon that notched a record 10 straight weeks atop the American charts, making it the decade’s most successful song. Sales were north of 10 million copies. Then there was the Physical album, which went multi-platinum, and the accompanying video album, the first of its kind, which was a ratings blockbuster off the back of an iconic film clip. Before Jane Fonda’s ’80s workout tapes, it was Physical that inspired the decade’s headband-and-lycra fitness craze.

“I had lunch with Stevie and John a few days ago, and we celebrated how lucky we are,” says Newton-John, on the phone from her ranch in Santa Barbara, where she is once again the focus of a global marketing campaign for the Physical album, which has been given the full remaster treatment and re-release in a deluxe edition.

Kipner, who 40 years later can still scarcely believe his luck with the song, says: “We got together and talked about something we’d done together so long ago. It’s pretty fantastic. It was really exciting just to sit there and celebrate.”

Alongside Grease, Physical was the biggest moment in Newton-John’s near six-decade career, a peak in a catalogue of achievement that spans music and movies and much else besides. At 73, she continues to pile up the gongs. Last year brought that damehood from the Queen. Just this month, Japan awarded her the Order of the Rising Sun, its highest civilian honour. Of these and her earlier honours – Grammys, American Music Awards, ARIAs and more – she remains disarmingly modest.

Of that pioneering release of the entire Physical album on video – which preceded MTV by two years – she is reminded that she won the first ever Grammy for music video in 1983. “Did I?” she laughs. “I have no idea of some of the things I’ve been awarded but I’m happy to have that.”

Happy indeed. And happy also for another gong about to come her way: joining the honour roll of the Australian Women In Music Awards. The AMWAs were inaugurated in 2018, when Helen Reddy was the first legend on the honour roll. Judith Durham of The Seekers got the nod the following year. Newton-John’s planned induction in 2020 was derailed by the pandemic. It will be officially presented at the AMWA ceremony in Brisbane next May. “A no-brainer,” says AMWA boss Vicki Gordon of the choice of Newton-John. “Her contributions to the industry have been extraordinary.“

Joining Reddy and Durham atop the honour roll is fitting, as Newton-John notes her history with both women. Growing up in Melbourne, Durham was an inspiration. “Judith has the most amazingly beautiful voice and incredible pitch. I used to go to school at Christ Church Grammar [in South Yarra], and, I don’t know if it’s still there, but they used to have a hall where people would sing on Friday and Saturday nights. I used to watch her there and she was such an incredible singer.” 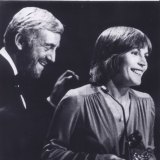 Helen Reddy in Nashville, 1973, accepting a Grammy for I Am Woman.Credit:UPI

Reddy played an even more pivotal role in Newton-John’s life. After she had her first country hits in the early 1970s, it was Reddy – by then a huge star in the US – who told her that if she wanted to make it in America, she needed to move there. Newton-John heeded the advice, and it was at Reddy’s Los Angeles home that the most consequential meeting of her career occurred. “Helen used to have Sunday night movie nights and she’d invite people to come. [Film producer] Allan Carr wanted to meet me and so she invited me. And that’s how it all started with Grease. Helen and I did some duets together on TV and of course I admired her because she’s a powerful woman, and a great singer.”

It was the phenomenal success of Grease that made Newton-John a household name around the world in the 70s; it was Physical that propelled pop music and music video in the 1980s. Kipner remembers he and songwriting partner Terry Shaddick starting out with fairly modest ambitions. “We wanted to write a song about the physical side of love, not the falling in love part. And that was literally the idea. It wasn’t like it was going to be a big thing. I sang the demo and we thought it would be a song for someone like Rod Stewart or another male singer. Never imagined Olivia would do it.”

Newton-John remembers it initially being offered to her friend Tina Turner, at the time still a few years away from her spectacular comeback. The two women shared a manager, Australian Roger Davies, who had cut his teeth managing Sherbet in Australia. “Tina said she liked it but she thought it might be more in line for me than her,” Newton-John recalls. “I’ve always thanked Tina for that decision not to record it.”

What no one expected was the global phenomenon that followed. After recording the song, Newton-John on her own admission “panicked” about the risque lyrics, a far cry from the gentle ballads and country songs that had defined her early career. The solution: a video clip set it in a gym. Physical may have been all about sex; the video was all about muscles and sweat. It was all done with a nudge and a wink. Then the song was banned in some markets. As Kipner says, they could hardly have asked for anything more. “That was the best thing that could have ever happened. All of a sudden, people had to go take another listen and it really took off.” 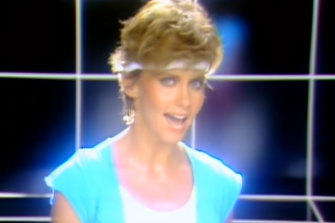 Forty years on, they still can’t believe their luck. The song has had a long life – sampled last year by Dua Lipa for a song of the same name, and charting this year for Newton-John. In recent weeks, the Amazon pop music charts have featured the Physical re-release, competing for top 10 space with new releases from Elton John and ABBA.

Just like old times. Or as Newton-John says, it’s like capturing lightning in a bottle – twice. “If we knew the real answer to why that is, we’d keep doing it,” she laughs. “I always think it’s all about the songs. ABBA, who I’m lucky enough to call friends, are just amazing songwriters and producers. And Elton, too. Brilliant. It’s really all about great songs.”

WHEN Olivia Newton-John is presented with the third Australian Women in Music Honour Roll award next May, another Australian superstar, Tina Arena, will be leading the official tribute. Long before she came to know Newton-John as a friend and peer, Arena was singing her songs in her Melbourne lounge room as a kid, and later on Young Talent Time.

“Olivia for me goes back to my early childhood, probably as early as six or seven,” Arena says, recalling the “pinch myself” moment when she got to record with her mentor for a duets album in 2002. 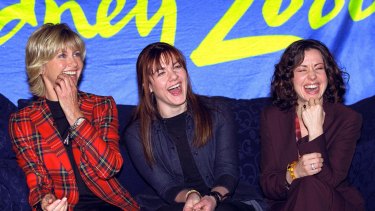 “She’s an extraordinary human being, somebody that has always just been herself,” Arena says.

“She’s never pretended to be anything other than herself. That’s something that is extraordinary in our industry. And she’s just a very, very kind, empathetic, massively intelligent woman.”

Arena heralds the support Newton-John has shown younger Australian artists, and says the AWMAs are an important means of celebrating the history of women in music.

“It is really important that women support one another … because it’s been such a male-dominated industry for a long time. I always found it really comforting to know that [Olivia] was there, and that she could understand what I was going through.”

“We do have two posthumous patrons – Chrissy Amphlett and Ruby Hunter … and we were unable to acknowledge either of them when they were alive. It’s just a really important thing to remember the contributions that these women have made.”