Wet weather has hampered fire mitigation efforts, resulting in only 40 per cent of scheduled works being completed in the past 12 months, as authorities warn summer fires are possible.

In the latest financial year, the agency has treated 40,000 hectares through burning, grazing and clearing efforts – which will offer asset protection to 47,000 homes – well short of its 102,600-hectare target. The previous financial year saw 176,000 hectares burnt. 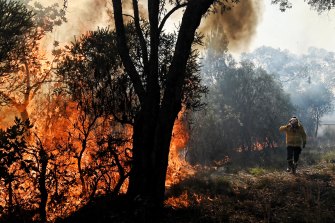 The RFS has only completed 40 per cent of its planned mitigation efforts because of wet weather.Credit:Nick Moir

But the wet weather does not mean the risk of summer fires has evaporated.

“While we have seen significant rainfall over most if not all of the state over the last 12 months, including significant flooding events, we have continued to see good growth in the grassland areas,” NSW RFS deputy commissioner of field operations Peter McKechnie said.

He said areas west of the ranges were of particular focus.

“Grass fires just start so easily, they move extremely quickly,” he said. “While all fires are influenced by wind, grass fires are whipped up quickly and the slightest gust of wind in any direction can see the grassfire change direction as well.”

Towards the end of August, the RFS will be able to give a better indication of the fire risk for the coming season. 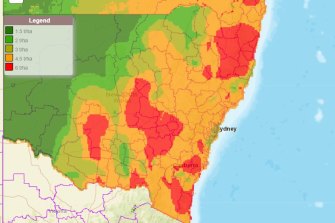 Present danger across the state for grass fires in tonnes per hectare, as RFS warns landholders not to be complacent despite the wettest autumn on record.Credit:NSW RFS

Despite two back-to-back La Nina events, and a 50-50 chance a third one could occur this year, McKechnie said people still needed to prepare for the possibility of fires. This included removing flammable material from around the home, cleaning gutters, trimming branches and preparing bushfire plans with family or those living on the property.

He added that while 5.5 million hectares of the state had burnt in 2019-20, these areas were regenerating and they would experience fires again.

The Bureau of Meteorology’s outlook for August to October has forecast above-average rainfall from eastern Queensland to the NSW South Coast, with parts of Victoria and the Northern Territory likely to also experience heavy rainfall.

The agency also warned that saturated soil from recent rainfall events, as well as full water systems – including most dams around NSW above 70 per cent capacity – would exacerbate flooding risks across much of eastern Queensland and NSW for the coming months.

Bureau of Meteorology chief executive officer Dr Andrew Johnson said the landscape was saturated, and dams and rivers were full.

He added that it would probably be some months before the agency is able to declare a third successive La Nina event, and if climate drivers are strong, it would provide greater confidence to authorities of the risk of a wet summer.

Johnson added that the impacts of climate change were already being experienced, including more intense rainfall events, lengthening fire seasons, and declining rainfall trends in south-west Western Australia and the south-east corner of Australia. But he said it was difficult to link individual events, such as the wet weather NSW experienced three weeks ago, to climate change.

“We know frequency and intensity of severe weather is increasing all over the world,” he said. “We are experiencing that in Australia.”

Johnson said it was typical to experience an average of 22 east coast lows each year, with seven that are significant, and two weather events where rainfall exceeds 100 millimetres.