Famous people: they’re just like us! Absolutely, shamelessly besotted with their dogs and not afraid to talk about it on a podcast. I have spent the past few months interviewing high profile human beings about their hairy, four-legged companions for a show called Who’s A Good Dog. It’s been a joy, at a time when obviously I feel the world needs more of it. 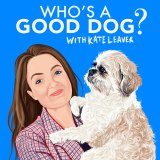 Who’s A Good Dog is a new dogcast, out now.

Making a dogcast is first and foremost an elaborate excuse for me to a talk about my favourite living creature, Bert the Shih Tzu. I also spoke to the first female member of The Wiggles about her beloved poodles, actor Phoebe Tonkin about her family pipsqueak, Lola, and Sir Tony Robinson about where his darling Westie sleeps at night. And seven other brilliant, doting dog people about their favourite canine housemates.

Here are the loveliest things I’ve learned while nobly providing the dog content we all need right now.

Emma Watkins, trained dancer and first female Wiggle, has two poodles, called Dali and Rupi. Emma’s mum gave them bumblebee harnesses with little wings, which they wear to the park every day. Children flock to the little bumblebee dogs and then look up to see none other than the former Yellow Wiggle with them.

Author Jon Ronson is just as pleasantly deranged as the rest of us when it comes to being a dog dad. He does elaborate skits on behalf of his dogs, Josie and Floppy, where each of them has a fully developed personality. In Jon’s imagined dialogue between his two hounds, Josie is the intellectual and Floppy, her idiot sidekick. I reassured Jon by telling him about a study that suggests people who talk to their pets are smarter and more creative than those who don’t. 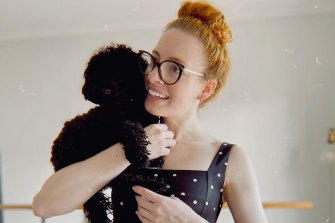 Australian actor Phoebe Tonkin once filmed with a wolf for her television show The Vampire Diaries. The wolf was so well-behaved that she forgot he wasn’t a household pet and got down on all fours to ruffle his fur and scratch his ears. “Ah, I don’t think you should do that…” said the wolf’s patient handler. Phoebe was not so thrilled when a snake actor turned up to film; she ran to her trailer and had to get her stand-in to do the scene for her.

Podcaster Marlee Silva’s family had one dog they all adored, but her little sister wanted a second. Her parents said no, but then they made the mistake of going on holiday. While they were away, Marlee’s sister staged a daring rescue of a small puppy. She thought the dog’s cuteness would overwhelm her dad’s wrath… and she was correct.

Behavioural scientist Pragya Agarwal’s dog, Taylor, once ate a full third of an anniversary cake just before it was about to be served. Pragya and her mother-in-law smoothed down the edges with icing and gave it to guests anyway.

Author Juno Dawson’s pint-sized puppy, Prince, only tolerates five human beings. Juno’s husband, Max, is not one of them.

When content creator Peter Mutabazi fled an abusive childhood in Uganda at 10 years old, he could never imagine having a family. Now he has four kids and two enormous dogs. All he needs now is to meet a beautiful woman at the dog park… 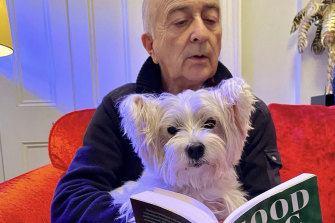 Sir Tony Robinson’s dog, Holly Berry, recognises him when he’s on telly. She also sleeps in the bedroom with her parents – but not in the bed!

Journalist Zing Tsjeng got her dog Judy on the front cover of Time Out London with Drag Race star Bimini Bom Boulash in an outstanding feat of pushy stage mum behaviour.

When he and his husband were adopting their kids, podcaster Stu Oakley told social workers all about their elderly Labradors to demonstrate what loving parents they could be.

It’s all so wholesome and gorgeous.

Who’s A Good Dog with Kate Leaver is available on your favourite podcast app now.

Kate Leaver is also the author of Good Dog.