Didn’t get tickets for Glastonbury? How socialites are already booking up spring 2023 with skiing festivals like Snowboxx which are all the rage (and you don’t even have to ski to go!)

With the Covid-19 pandemic behind us and summer festival season upon us, it seems like everyone is heading out to parties across the UK this year.

But if you missed out on Glastonbury tickets or you couldn’t quite get a place at Latitude, then fear not – there could still be a chance to get planning for the festival season before next summer rolls around.

Since it launched in 2013, winter festival Snowboxx has been growing in popularity – and it involves flying out to the Alps for a week-long ski party.

The combination of partying to some of the world’s best DJs, with the unusual day-activites of skiing and snowboarding, are making many turn away from the summer festival circuit in favour of the winter one.

With prices starting from just £249 per person for a 7-day stay, including accommodation and a wristband to enter the festival, many attendees don’t ever even strap a pair of skis, or snowboard, to their feet during the event.

And with tickets already on sale for next year – why not pick up a pass early and get planning for the first festival of 2023, running from 18th – 25th March, now?

The line-up will be announced after the summer, but early bird tickets go on sale next month on 29th July for those who sign up in advance.

FEMAIL reporter Lizzie May went to learn more earlier this year – and discovered that skiing is just one element of the wild week in the Alps. 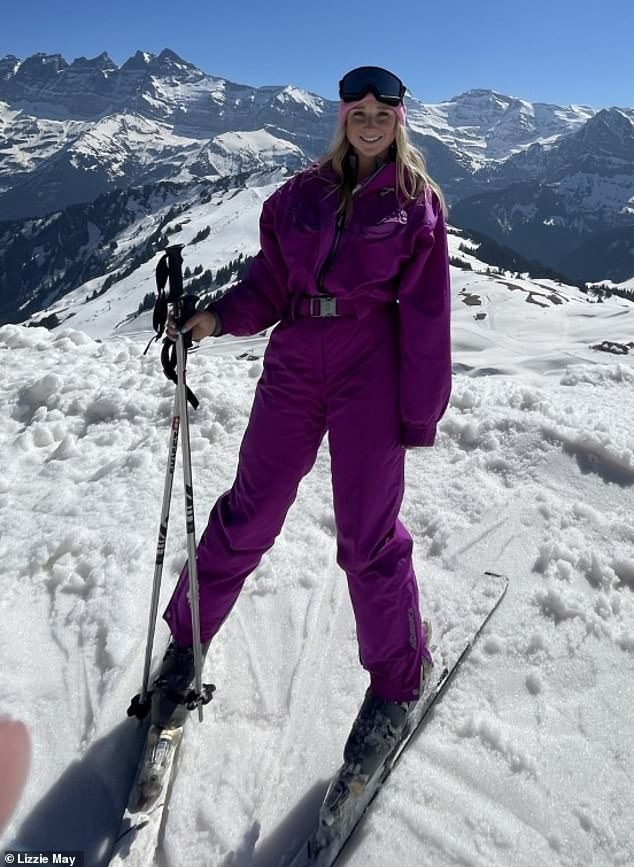 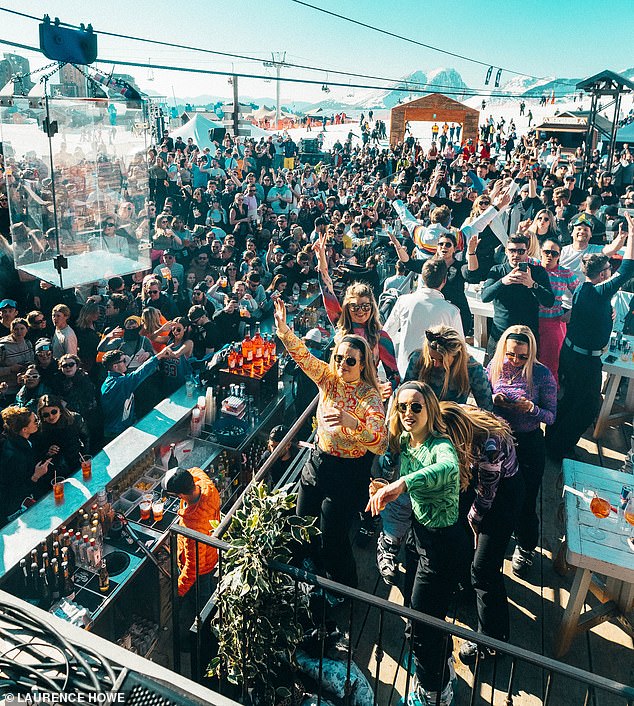 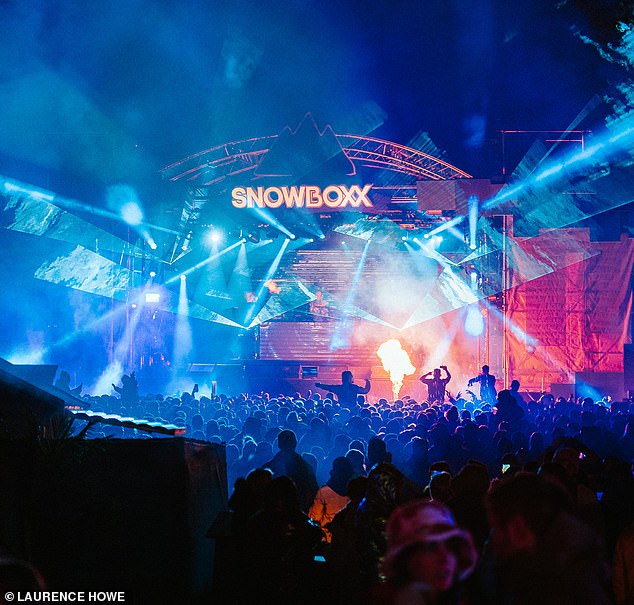 Earlier this year, ski festival Snowboxx came back for the first time since the pandemic, with revellers making their way up to Avoriaz in the French alps for the biggest party they’ve ever had.

Music festivals in the snow are a fairly new phenomenon, with more and more young people heading to the slopes for a party.

The Portes du Soleil area is described as a ‘dream’ for intermediate skiers, and one of the best parts was being able to ski in and out of Switzerland with your day pass.

There were a few spots at the top of the mountains, by the ski lifts, where you could grab a drink in the sunshine. 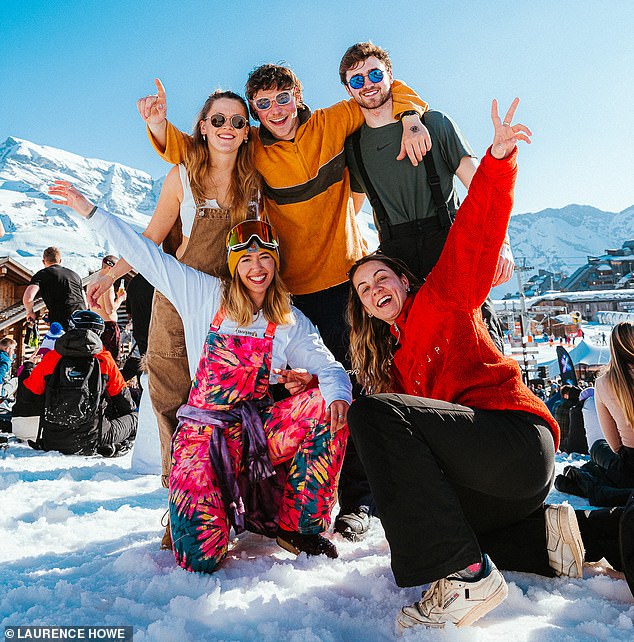 Earlier this year, ski festival Snowboxx came back for the first time since the pandemic, with revellers making their way up to Avoriaz in the French alps for the biggest party they’ve ever had 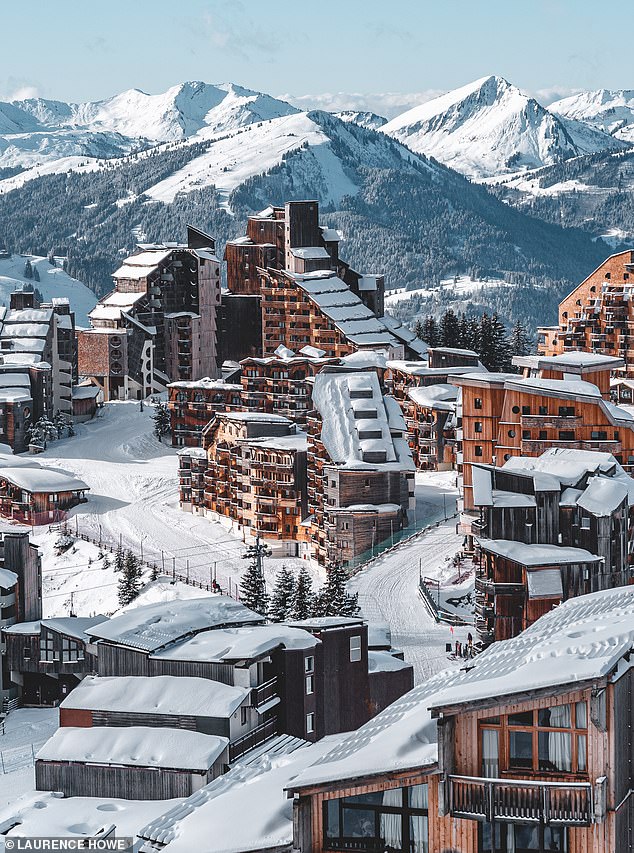 Lizzie stayed at L’Amara Residences (pictured), which like all accommodation in Avoriaz, is offered a ski-in-ski-out element which made the transition from day to night seamless

Meanwhile the infamous party bar of Folie Douce was located at the bottom of the slopes, meaning those getting a bit too inebriated only a small distance to wade through the snow home.

However despite the obvious risks of mixing skiing and drinking, the events of Snowboxx were spread out during the day and night.

First time skier James Parcell, 27, explained how during his time studying at Edinburgh University, almost all his friends would go on ski trips with their families – something he never experienced.

He said the festival was providing him with his first opportunity to try out the sport, while enjoying concerts with friends at the same time. 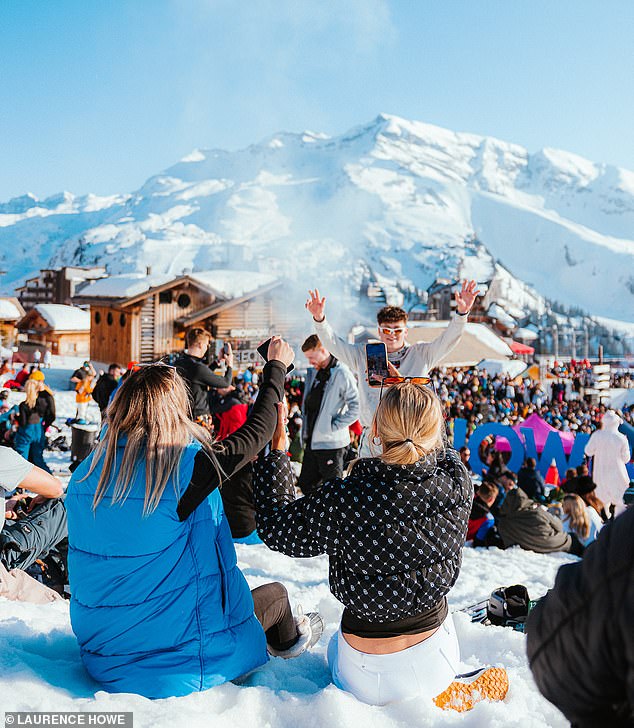 During the day, Snowboxx offers apres ski parties, bottomless brunches and other events, as well as Avoriaz already having plenty of activities on offer 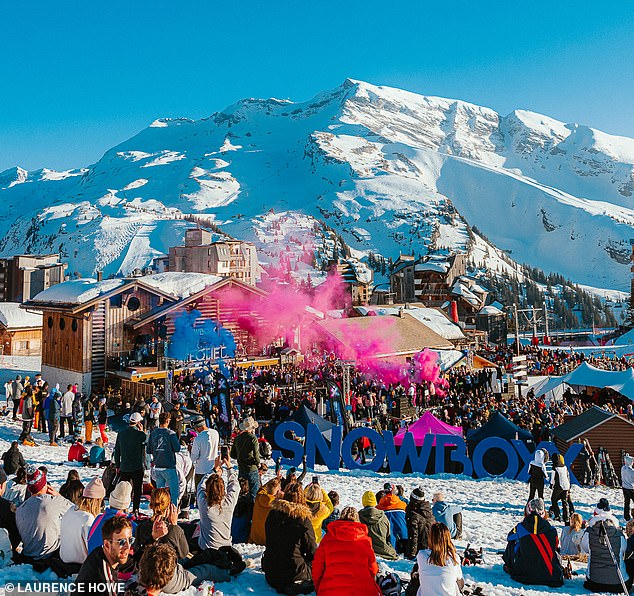 But while some attendees ski in the day and party at night, many of those who travel to the festival don’t even try out the winter sport

James said: ‘I didn’t grow up going skiing or snowboarding so it felt like a bit of a world away to just book a trip to somewhere like this having not done anything like it before.

‘Going to a festival and trying it at the same time was killing two birds with one stone.

‘I’ve met so many people who haven’t been somewhere like this.

‘The parties are nuts, but it’s like being on a massive session with tons of sound people back home, only with the views and mountain environment. And you can try something new like snowboarding.’

Meanwhile Daniel Phelan, 26, who lives in London, made Snowboxx his first ski festival and Avoriaz his second ever ski trip. 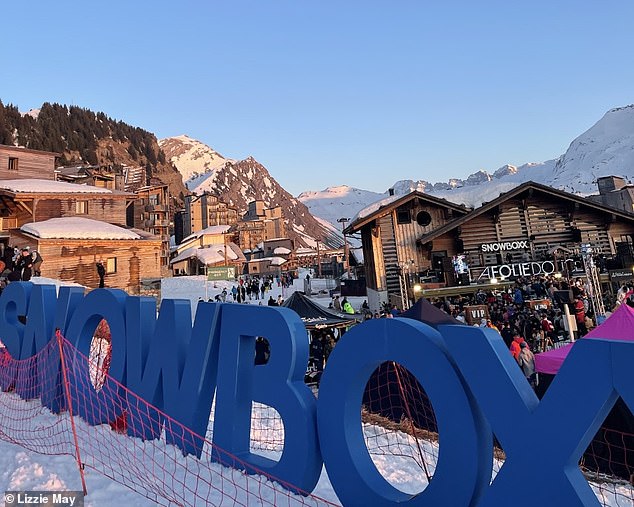 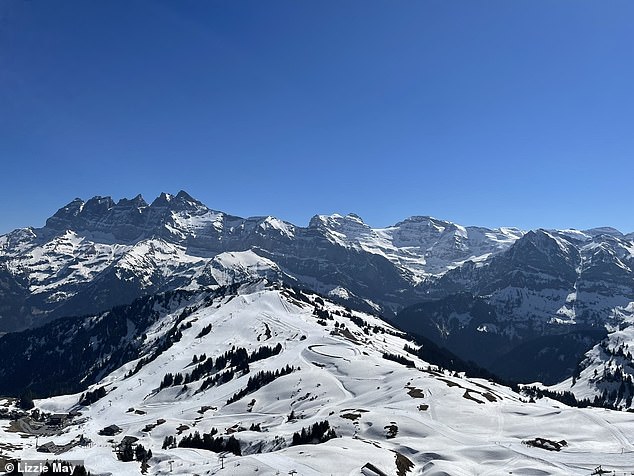 But for those who do want to ski, the Portes du Soleil area (pictured) is described as a ‘dream’ for intermediate skiers

‘It’s been such a great experience, the festival itself has been brilliant,’ he explained. ‘I loved all the acts, it was a class lineup, and there’s never been a dull moment.

‘There has always been something organised, no matter what time of the day it is.

‘Everything’s conveniently located, whether it’s the Folie Douce for a drink as we finish skiing, or if you want to head to the main stage later on in the evening.

‘You’re never too far away from your accommodation which is obviously favourable for the festival goers.’

And Daniel, who works in software sales recruitment, said he’d be more inclined to go to Snowboxx again rather than a summer festival closer to home. 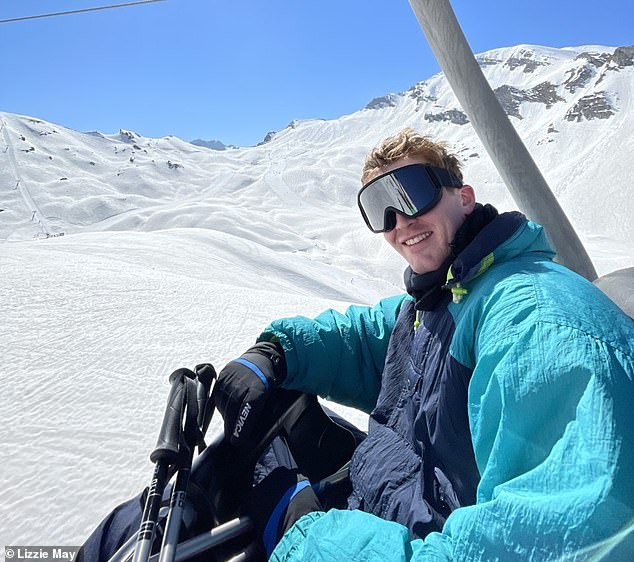 Daniel Phelan, 26, made Snowboxx his first ski festival and Avoriaz his second ever ski trip, calling it ‘a great experience’

He added: ‘I’ve been to Electric Picnic in Co Laois, Ireland, and as much as the line-up was more my thing, the camping out is not something I ever want to do again.’

However unlike James and Daniel, many of the festival-goers attending the event said they didn’t even plan to try out the winter sports.

Out of all the people I spoke to at the eight-day-long Snowboxx festival, there were more who didn’t know how to ski and didn’t plan on than there were of seasoned skiers.

Kayleigh Berser, 21, from Fareham, who was on the trip for the first time with her group of friends, said she had no intention of skiing because she had heard ‘too many horror stories’ from friends about the sport.

Meanwhile Hannah Michaels, 22, a student from Glasgow, said: ‘I’ve never skied in my life and I don’t really plan on to be honest. 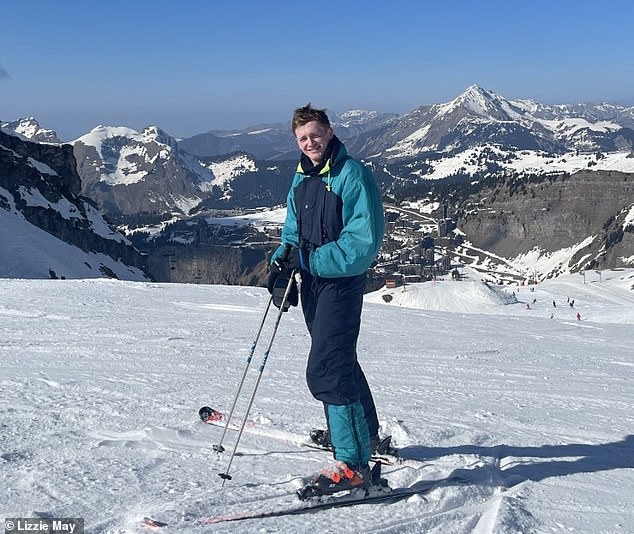 Daniel, pictured, who works in software sales recruitment, said he’d be more inclined to go to Snowboxx again rather than a summer festival closer to home

‘It’s not really my thing, but its just an unreal setting for a festival as I’ve only been to summer ones in the UK – Glastonbury, Creamfields, BBC Radio 1 Weekend.

‘I don’t think the UK festivals will be able to hit the spot after heading out here for the same thing – the views are incomparable and it feels like everyone’s on a bigger and better buzz.’

Similarly, Joel Davidson, 33, was out in the Alps with his friends for a stag do, which had been postponed for just as long as the festival due to Covid, and was not too fussed about the sport.

‘With booking a trip like this there is so much on offer, we had bottomless brunch this morning and we’ve got like four other parties to head to later on today and it’s only 1pm.’

If you couldn’t or didn’t want to head to the slopes, you could take a trip around the snowy hills of Morzine skijoring – which involves being strapped up to a horse who tows you around the mountain

And with plenty of activities to do other than snow sports, no-one was left out on the festivities.

If you couldn’t or didn’t want to head to the slopes, you could take a trip around the snowy hills of Morzine skijoring – which involves being strapped up to a horse who tows you around the mountain.

You could also go ice skating, go bowling or head to the one-screen cinema which is only a walk away from L’Amara Residences and the other hotels within the Avoriaz resort.

I stayed at L’Amara Residences, which like all accommodation in Avoriaz, offered a ski-in-ski-out element which made the transition from day to night seamless.

And the apres-ski event every afternoon was at the bottom of the slopes, with tents and stages within walking distance of the festival accommodation.