Little Stormi Webster may soon be getting a sibling! Her mother, Kylie Jenner, has been hinting on social media that she’s ready to grow her family with boyfriend, Travis Scott. With Stormi having just turned one in February 2018, it’s no wonder the makeup mogul may be considering having another child. Her little baby is growing up, after all! Oh, how time flies. So the question is — when will Kylie Jenner and Travis Scott have more kids?

According to E! News, the 21-year-old is ready to become a mother again very soon, so much that it’s reportedly all that Jenner can talk about lately. It is a big life decision, which is totally understandable, especially with how soon Jenner reportedly wants to get pregnant again. A source tells E!, "She would love to have another baby with Travis and would love to be pregnant by next year. She talks about it all the time and feels like she was truly meant to be a mother." Elite Daily reached out to Jenner’s team for comment on the report, but did not hear back by the time of publication.

Unlike Jenner’s last pregnancy, where fans didn’t know about the makeup mogul’s pregnancy, well, until she gave birth, this time around, the star isn’t shying away from sharing her feelings publicly about wanting another baby.

On Travis Scott’s 28th birthday, Jenner shared a NSFW Instagram post to her baby daddy about possibly having another child. The post started off sweetly with Jenner commending Scott for being by her side all these years and being a great father to their daughter, Stormi. She wrote, "Watching you evolve into a partner, friend, son, and father you are today has been so fulfilling."

She then got really honest by saying, "Let’s f*ck around and have another baby."

watching you evolve into the partner, friend, son, and father you are today has been so fulfilling ♥️ my real life bestie & hubby all wrapped into one. i love you and I’m so so proud of you. happy happy birthday ?? let’s fuck around and have another baby. ?

It couldn’t be any more clear than that, really. Jenner looks like she’s ready to become a family of four, and apparently so is Travis Scott and the rest of the world.

On Jenner Instagram post, hubby Travis Scott left a comment writing, I love u mama/Wifey. We shall rage 4ever." And I don’t know, I might be reading too much into it, but could that 4 in "4ever" be a hint that Jenner’s dream of becoming a mother again is coming true?

Jenner’s sisters, Kim and Kourtney Kardashian, as well as a slew of celebrities such as Hailey Bieber and Winnie Harlow, expressed their support for the couple on Instagram as well. Jenner’s BFF Heather Sanders is even hoping that the couple would "give Stormi a brother." But it looks like Jenner is trying to expand the Kardashian x Jenner female line, because she wants to have a baby girl! 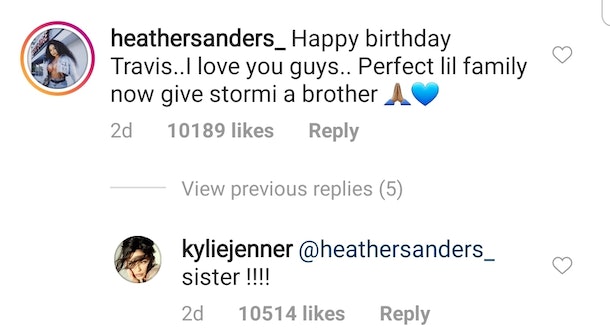 Jenner and Scott have been dating since April 2017 and since then, the two have been inseparable and have proven time and time again that they are actual relationship goals.

When Avengers: Endgame released in theaters, the couple went all out with their daughter for matching Avengers costumes. Scott was dressed as Iron Man, while Jenner was dressed Captain Marvel and Stormi as Thor. Nothing says "settled down" more than matching family costumes — and pictures. Could we be getting another baby anytime soon? Only time (or Instagram) will tell.