Where have Angela Rayner’s curls gone? Labour deputy leader showed off her ‘drastic’ poker straight hair extensions in the Commons to highlight her ‘confidence and personality, stylists reveal

Angela Rayner has ditched her trademark curls in favour of a poker straight set of hair extensions to show off her ‘confidence and personality’, a stylist has revealed.

Labour’s deputy leader, who is known for her unique sense of style, usually opts to wear voluminous hair extensions to add length to her ginger locks and curls them into a distinctive bouncy style.

However earlier this month she debuted a new look in the House of Commons when she appeared opposite Boris Johnson at Prime Minister’s Questions.

The 41-year-old MP for Ashton-Under-Lyme straightened her extensions for added effect and length, meaning they almost reached her waist.

Angela opted for the same look again yesterday as she took to the dispatch box, with celebrity stylists telling FEMAIL there is ‘a sense of playfulness’ about her new style.

Tom Smith said it was a ‘drastic’ change, explaining: ‘Angela is not afraid to express herself and she is empowered to make her own choices and she is not trying to fit a stereotype.

‘She is clearly comfortable in her own skin and likes to look after her appearance.’ 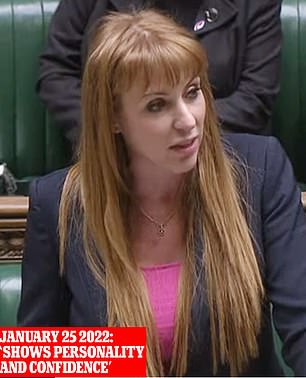 Angela Rayner, 41, has ditched her trademark mane of tight curls in favour of a poker straight do, celebrity stylists have revealed(pictured left, January 19, and right, yesterday)

Last July,  Angela, who once described herself as a ‘gobby northern ginger lass’, appeared to proudly show off her natural hair.

During a visit to the Social Enterprise Hub near King’s Cross, the MP opted for a shorter cut, with her straight ginger locks falling just below her shoulders.

Meanwhile she sported a similar look during an interview with Sky News that same month.

Celebrity hair stylist Tom said that Angela’s natural hair appeared ‘fine’ and said the politician was opting for a ‘formal-looking’ style at the time. 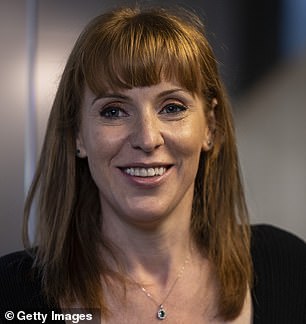 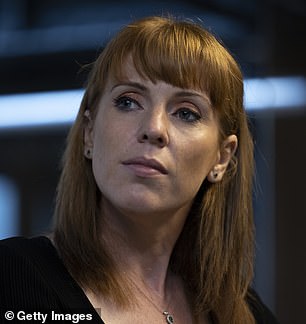 During a visit to the Social Enterprise Hub near King’s Cross last summer, the MP opted for a shorter cut, with her straight ginger locks falling just below her shoulders 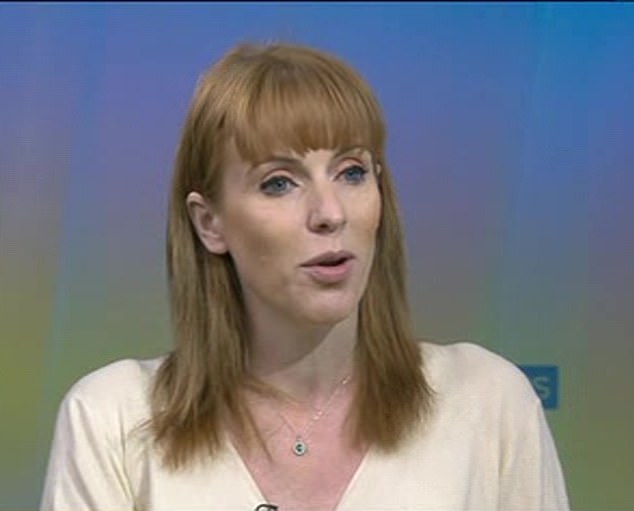 Last July, Angela, who once described herself as a ‘gobby northern ginger lass’, appeared to proudly show off her natural hair length (pictured in an interview with Sky News)

He added: ‘I suspect she has always wanted longer hair but as her hair is thin it can be hard to grow out.’

By September, just months later, she showed off a lengthy mane of red hair which reached her waist, which she regularly styled into tight curls.

Since then, she has rarely been seen with a different style and has become known for her big and bouncy hair-do.

Celebrity stylist Tom said: ‘Her extensions are mixed colour which gives the illusion of highlights.

However months later, the 41-year-old debuted a much longer bouncier mane of red locks and it has since become known as her trademark look (pictured) 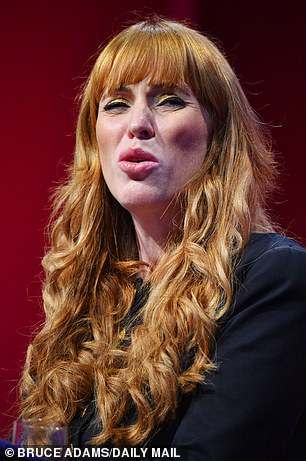 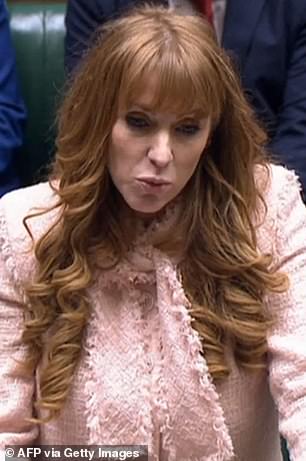 Angela has since regularly off a lengthy head of red hair which almost reaches her waist, which she regularly styles into tight curls (left, at the Labour Party Conference in September, and right, earlier this month)

‘This is a common choice when having extensions as it allows people to get a colour change and length all in one go.

‘When she first had the extensions put in, she may have been excited to style her new hair which is why she curled them initially.’

Following in Theresa May’s footsteps? Angela Rayner is known for her love of unusual and VERY bold shoes

The politician appears to have a love of bold and unusual shoes, regularly stepping out wearing ‘flatforms and creepers, which tend to be popular with goth and punks.

She has pairs in many different styles, including a black pair featuring a leopard print upper which she wore in April 2021 for a visit to Hartlepool College of Further Education.

Meanwhile she donned a similar pair of flatform shoes, which wouldn’t have looked out of place in the 90s, during a visit to Manchester with Sir Keir Starmer last year.

The MP also owns a selection of Dr Marten boots, including a tartan pair which she wore in January with a vibrant red coat and white shirt. 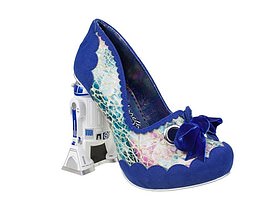 In 2015, Angela caused controversy after she became so incensed at missing out on a limited edition pair of Star Wars shoes she complained on Commons headed notepaper (pictured, Angela’s choice of shoe)

In 2015, Angela caused controversy after she became so incensed at missing out on a limited edition pair of Star Wars shoes she complained on Commons headed notepaper.

She believed her name had been on a pre-order list for the Irregular Choice shoe, but wasn’t notified when the shoes went on sale, so she wrote a letter of complaint to the head office on House of Commons notepaper.

In the letter, which was later leaked, Angela wrote: ‘I have only ever brought your shoes and I am loathed to do so again [sic].

‘I am writing to let you know that treating customers in that way will only cost you more in the long term.’

Angela’s aides were said to have ‘hit the roof ‘ when they heard about the comment from MP McMahon, but kept it from her to avoid fuelling the problems even further.

Meanwhile Ava Holland, artistic director for Gielly Green, explained Angela may have styled the extensions into bouncy curls to ‘cover up the disconnection from her natural hair and the extensions.’

However in recent weeks, the MP has been seen on two occasions with her hair in a poker-straight style.

Tom explained: ‘There is a sense of confidence and playfulness about Angela’s new look.

‘She may have opted for this length to show more of her personality.’

Meanwhile he added that Angela’s straightened hair might be ‘less effort’ to style each day.

He said: ‘After time the motivation to put the effort into styling each day decreases which is why in newer photos her hair is straight.

‘Straight is the way the extensions are cut when put in and require effort into managing them.

‘The novelty has essentially worn off which is not unusual.’

And as her profile has risen at Westminster, she has been unafraid to tone down her outfit choices.

She showcased her bold sense of fashion as she was snapped stepping out of her London home alongside married MP Sam Tarry last week.

The grandmother was spotted emerging from her £30,000-a-year taxpayer-funded property with shadow minister Sam, 39, in tow one morning last week.

Opting for a vibrant look, Angela, who is known for her unique taste in clothes, mixed the unusual combination of blue leather, leopard print and fake fur for the outing.

She donned a ribbed top with a matching £249 Pure Collection pencil skirt, with a clashing pair of her trademark £95 vegan leopard print boots from Office.

The MP added a touch of glamour by wearing a £65 Beaverbrooks pendant with a bee charm. The worker bee is known to be the symbol of the city having been  added to Manchester’s coat of arms in the mid 19th century and represents the industrial heritage of the region.

Angela wrapped up against the cold in a vintage faux fur jacket and could be seen clutching her face mask, as well as a £180 black Fossil backpack.

Meanwhile Ilford South MP Sam attempted to keep a low profile in a grey wool baker boy cap for the outing, which appears to cost £40 from Savile Row Company.

Leaving his pink shirt unbuttoned, he appeared to coordinate with Angela in a vibrant blue three-piece suit, over which he wore a black overcoat.

It marked the first time the pair have been captured on camera together for the first time together in public away from the office, after rumours of their deepening friendship ran rife in Westminster.

Angela, now the most powerful woman in the Labour Party, was first reported to have grown close to Corbynite Sam, her former campaign manager when she was running for the party’s deputy leadership in 2020, three months after splitting from her husband of ten years, trade union official Mark Rayner. 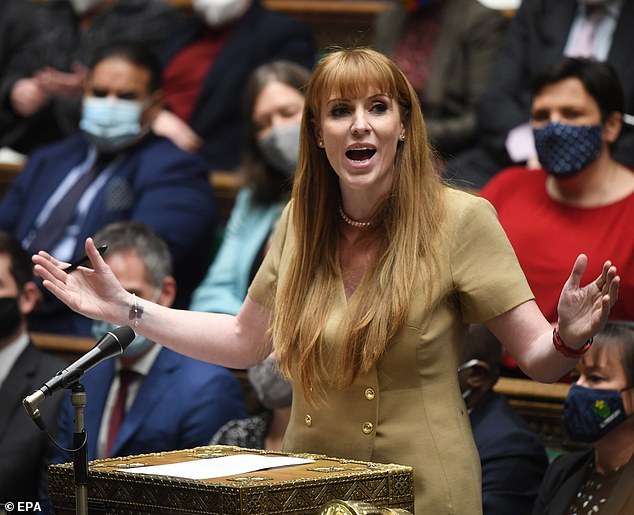 However earlier this month, Angela debuted a new look in the House of Commons when she appeared opposite Boris Johnson at Prime Minister’s Questions 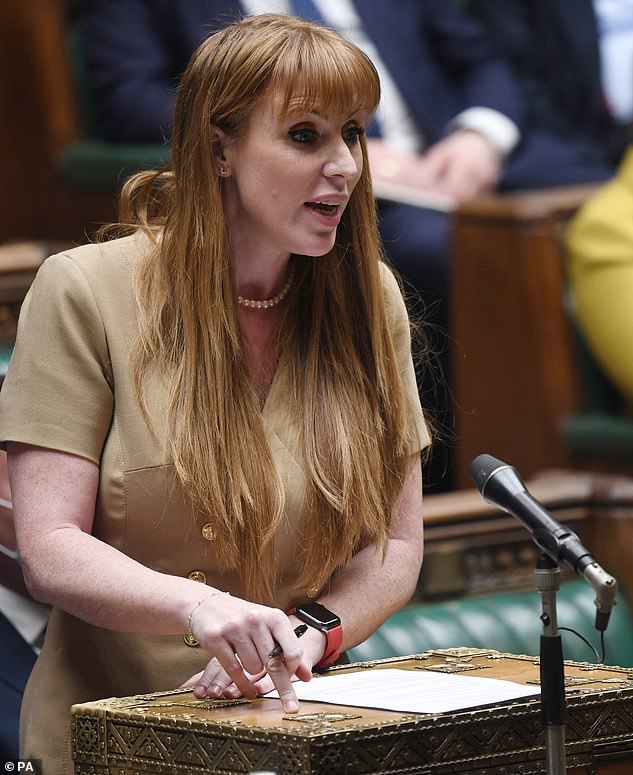 The 41-year-old, whose natural hair could be seen beneath her hair extensions, opted for a poker-straight hairstyle

One of the most powerful figures in the Labour Party, she holds four titles including deputy leader, shadow first secretary of state, shadow chancellor of the Duchy of Lancaster and shadow secretary of state for the future of work.

She has spoken openly in the past about her rise to power within the Labour Party – that begins with a troubled childhood, growing up on a council estate in Greater Manchester.

She has told interviewers about how she became a carer for her mother, who could not read or write and suffered from bipolar disorder.

She recalled how her mum once came back from the shops with dog food, thinking it was stewing steak, because she couldn’t read the label. 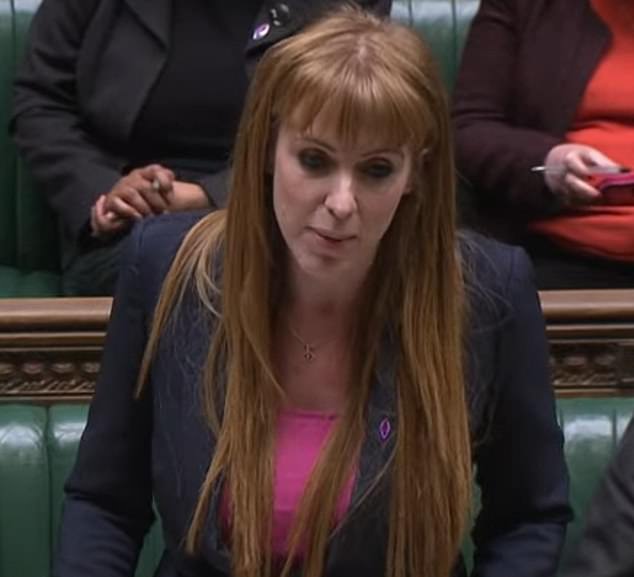 Yesterday, Labour’s deputy leader opted for a similar hairstyle as she took to the dispatch box (pictured) 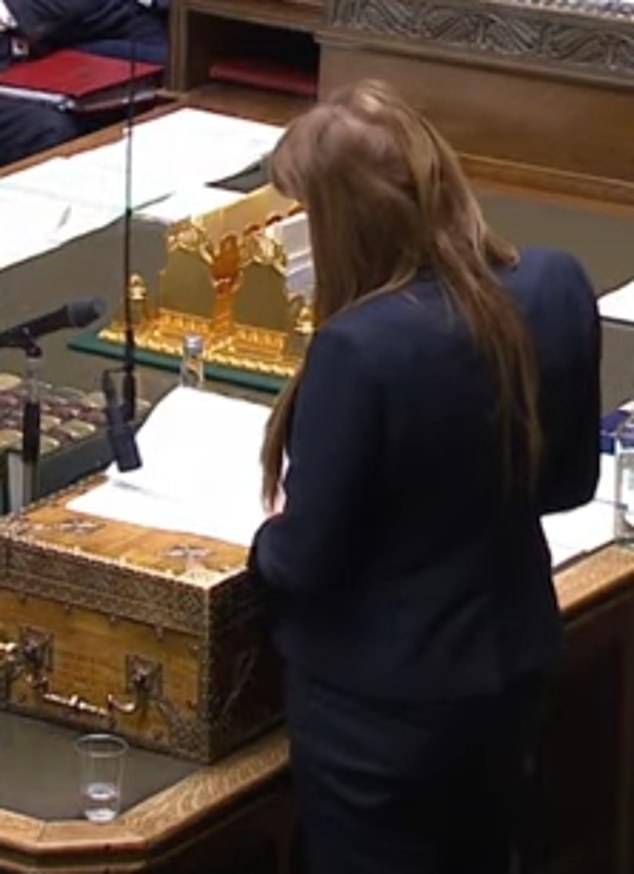 A teenager when her parents divorced, she talked of having suffered years of dysfunctional home life marred by her father’s affairs and her parents’ ‘explosive’ relationship. She described her childhood existence as ‘feral’.

By the age of 13 she was clubbing in Manchester, looking for ‘the wrong sort of affection from the wrong sort of people’, and was pregnant at 16. The birth of her son Ryan, however, proved a turning point.

Determined to provide for her son and become a role model to him rather than conform to the single teenage parent on benefits stereotype, Mrs Rayner trained as a Samaritan, then became a carer.

Through her work, she discovered the trade union movement, becoming a rep, which gave her the introduction to politics.