The futile pursuit of analysing comedy has long been likened to dissecting a frog: You bore the audience and end up with a lifeless, croaked amphibian. Yet is there something true to be learned if instead, you study a comic frog?

In the case of Feels Good Man, the Sundance Festival award winner debuting Monday night on PBS's Independent Lens, you end up with one of the most politically relevant films of the year.

On one level, the 90-minute documentary is about California cartoonist Matt Furie and his globally known creation, Pepe the Frog. The benign, chillaxin' character was plucked more than a decade ago from the relative obscurity of the Myspace-sprung slacker-life comic Boy's Club and transmogrified into a meme by 4chan users and others and cribbed by pop singers – before swimming into the sociopolitical mainstream in 2016 as a symbol co-opted by the alt-right and shared on social media by the campaigning Trump family.

Through a wider lens, though, Feels Good Man speaks to how internet culture has come to influence this precise moment in American politics. 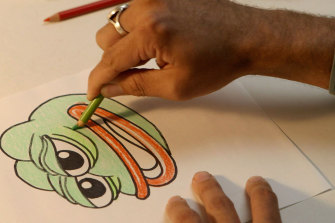 A scene from Feels Good Man, about artist Matt Furie battling to regain control of his creation Pepe the Frog.Credit:Kurt Keppeler/Ready Fictions via AP

First-time director Arthur Jones calls his movie a case study into what occurred optically during the 2016 election, told through the prism of "how a joke on 4chan became this larger story about how trolling moved off message boards and into mainstream Republican politics." By October of that year, Donald Trump Jr. proudly posted to Instagram a "Deplorables" image featuring Pepe with Trumpian hair.

"Now, four years later, a joke that started on 4chan is moving into mainstream politics again, but it's not about trolling – it's about misinformation," Jones said by Zoom from Los Angeles. "So this story might seem silly . . . but it's actually something that still has a lot of cultural potency."

Whether trained on an artist's table or a president's podium, Feels Good Man chronicles an ongoing war over who gets to define what a simple frog – or a simple fact – means, especially when modern existence can seem to flip rather amphibiously between digital worlds and real life. 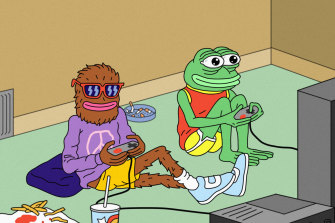 Pepe the Frog was plucked more than a decade ago from the relative obscurity of the Myspace-sprung slacker-life comic Boy’s Club.

The relevance of this film, says writer-producer Giorgio Angelini, is sparked by a current urgency: "We have to find ways to take back our consensus reality."

The act of taking back is always central to the documentary's narrative – whether Furie is considering whom to sue over the use of Pepe's image or young Hong Kong protesters are adopting the character as a symbol of optimistic hope.

In one poignant scene, Furie is sitting at a table at Comic Con Copenhagen 2018, passively observing the Danish cosplayers, when a fellow cartoonist asks whether he is the creator of Pepe the Frog. When Furie says yes, the table-mate replies sympathetically: "It must suck for you that he has become hijacked by 4chan" message boards.

"It doesn't really suck," responds Furie, the soft timbre of his voice seeming to search for a philosophical spin. "Nothing is forever." And the cartoonist later says to the camera: "I'm just a spectator to how things can mutate and evolve on the Internet."

As Furie evolves during the film's journey, though, the onetime San Francisco cartoonist realises his laid-back ethos about sharing art – influenced by how Jerry Garcia fans once traded mix tapes, Jones says – doesn't address what battles he should consider fighting. Even a partial attempt at reclamation means lawyering up over copyright protection, and we see Furie travel to New York in his mission to get Pepe, saddled with fresh "Nazi frog" associations, removed from the Anti-Defamation League's database of hate symbols.

Many cartoonists are observers by nature, though, so at times, the film's imagery comes to the fore to effectively speak on the reticent Furie's behalf. "He can't reclaim Pepe," Jones said, "but he can try to set the record straight" through Feels Good Man (the title being a reference to Pepe dialogue crucial to the launch of the meme).

"It's been a relief to watch the movie as if I was a spectator and not myself," Furie told The Washington Post via email. "I can see more sides that way, and have a wider perspective and cultivate a deeper understanding of my situation and our shared cultural situation." (The film's interviewed experts include BoJack Horseman cartoonist Lisa Hanawalt and the Atlantic writer Adam Serwer.)

In the eyes of the filmmakers, Pepe is a stark reflection of our cultural situation, and as occult expert John Michael Greer says in the movie, the character is even a digital-culture omen to be heeded.

The Internet "deliberately almost shamed us out of our ability to feel empathy and connectivity and turned us into these rabid connoisseurs of digital bites," said Angelini (My Friend Dahmer), adding that the film is "this reaffirmation of reality" as "the digital world is now informing our real life."

Furie, meanwhile, urges viewers to glean a central message: "Don't believe everything that you think. We should question everything – even our own thoughts."