The biggest news to come out of Mar. 27’s UFC 260 in Las Vegas for non-MMA fans was the fact that  Travis Barker, 45, and girlfriend Kourtney Kardashian, 41, and Machine Gun Kelly — real name Colson Baker — and his lady Megan Fox, 34, were seated together in the VIP section on a double date. “This was not the first time Kourtney and Travis have hung out with Megan and Colson. Colson is over at Travis’s house a lot and Megan is usually with him, so Kourtney has gotten to know both of them through Travis and they’ve all become friends now,” a source tells HollywoodLife.com EXCLUSIVELY.

While the couples have become close, it was at the UFC event where between fights, the camera visited the VIP area and showed Megan and MGK seated together. It then panned over to reveal their pals Kourt and Travis sitting next to them, both enjoying lollipops instead of drinks. Fans freaked over the hot couples’ double date, which was their first big public outing as a foursome. But they’ve kept things under wraps for some time now. “They do dinners at home or hang out in the studio all together. It’s cute because they’re both in such happy relationships. so it’s very lovey dovey,” the insider continues.

A second source tells us EXCLUSIVELY that fans will be seeing a lot more of the two couples together. “They all have the same interests and love living life. They are legitimately all friends with each other. We are going to see them all out together plenty of times in the future, start getting used to it.”

“They are all in love and that in itself is a fun and nice thing to share with each other. Hanging out together provides such a fun outlet. When they do these outings together like going to a UFC fight because they are sick of being quarantined, it is actually something where they are really having a fun time,” the insider continues. 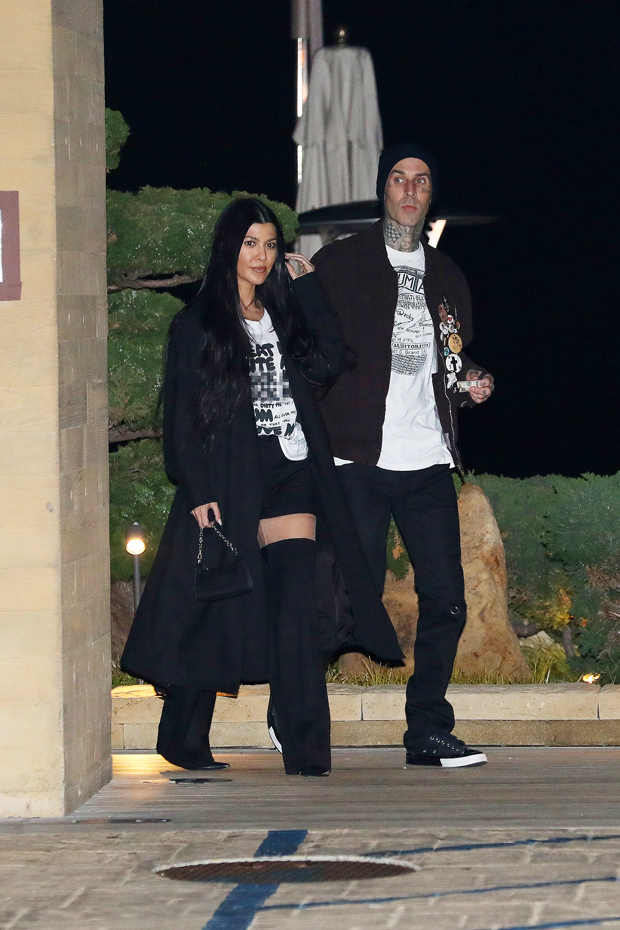 “They want to be out and about living life, especially the ones they have afforded themselves. They have gained a genuine trust amongst each other and don’t have to worry about being around each other. But at the end of the day they also enjoy being celebrities,” the source explains.

“If they didn’t want to be seen, they wouldn’t go out to public events, they wouldn’t go to celeb hot spots like Nobu. They like hanging out as a couple or all together because they have fun with each other but still want to be noticed. So with all of them combined, they get so much of the attention on themselves they also want. They know how to play the game. It is the perfect triple threat. They get to do something fun as a couple, fun with friends and they can still remain relevant with getting their pictures taken,” the insider adds. 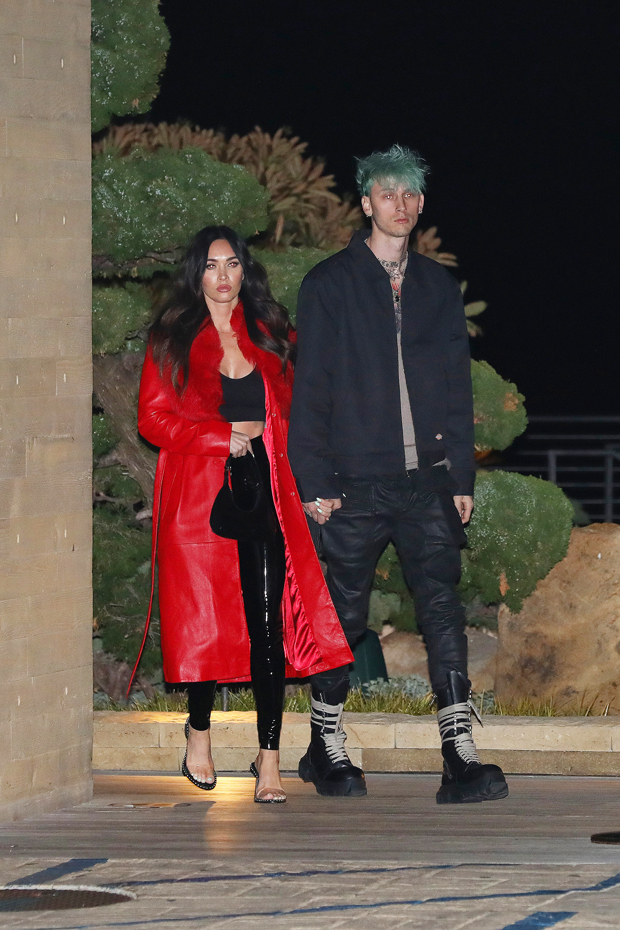 There’s no doubt that Kourtney and Travis love going to Nobu Malibu. The paparazzi camp outside the sushi restaurant and the two were photographed there back to back nights on Mar. 19 and 20, and went out to Nobu Malibu again on Mar. 25 while accompanied by Kourt’s youngest son Reign Disick, 6. Kourt just went to dinner there on Mar. 29 with her oldest son Mason Disick, 11, but Travis wasn’t along that time. Megan and Colson just missed the couple by a night, eating there on Mar. 18.

Travis and MGK were already pals before they started dating their respective girlfriends. The Blink 182 drummer co-produced MGK’s latest record Tickets To My Downfall, and has been a close confidant for him, especially when it comes to sobriety. In a November 27, 2020 sit down with actor Dave Franco for Interview magazine, MGK revealed, “Travis Barker has been huge in the process of grounding me, because he’s lived it. It’s much different than a priest or something, where I’m like, ‘How can you relate to me? It’s easy for you to tell me I can get through it when you’ve never faced these obstacles.’”

“Whereas with Travis it’s like, ‘I know for a fact that you went through what I’m going through,’” he continued. “And then obviously, which I’m sure is the same with you in your relationship, when you have a partner, mine being Megan [Fox], sitting there with you on those dark nights when you’re sweating and not being able to figure out why you’re so in your head, to help you get out of your head and put it in perspective, that really, really helps.”