The sight of chaos in Parliament never helps a government when voters expect prime ministers to lead a unified team.

Scott Morrison took a hammering this week when at least seven members of his own side turned against him in votes on the floor of Parliament, while a handful of others pushed back on his signature policy on religious freedom. 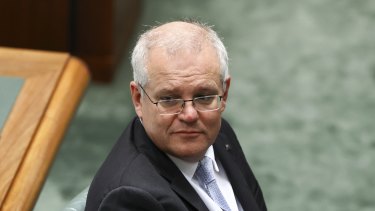 Prime Minister Scott Morrison during the division when Bridget Archer crossed the floor to vote against the government.Credit:Dominic Lorrimer

But the Prime Minister will have good reason to thank some of his renegade Liberals and Nationals if he is lucky enough to win the next election.

Why? Because some of the rogue MPs are likely to hold their seats by standing up for what they believe rather than following the Morrison line.

Bridget Archer, the Liberal MP for Bass in northern Tasmania, infuriated some on her own side by crossing the floor on Thursday to vote for a debate on a national integrity commission. She shamed Morrison on something he promised three years ago but is yet to deliver.

Archer did something similar one year ago when she abstained from a vote on the cashless debit card for welfare recipients – a real issue for people in her community on low incomes.

Archer won Bass by just 563 votes at the last election. The seat swings from one party to the other every three years. Voters may stick with Archer if they see her sticking up for them.

Liberals including Archer joined a smaller revolt this week without going so far as to cross the floor. The group included Dave Sharma, Katie Allen, Andrew Bragg, Warren Entsch, Fiona Martin and Trent Zimmerman. They split from the official line on the religious discrimination bill introduced this week.

Morrison wants protections for gay and lesbian students to be sent off for a review by 2023 but the Liberal group wants the issue dealt with in this Parliament so schools cannot expel LGBTQI students.

This infuriates some of the conservatives in the government but Liberals have to think of their electorates, not just their leader. Allen represents Higgins in Melbourne, Sharma represents Wentworth in eastern Sydney, Zimmerman represents North Sydney. They believe in equality for LGBTQI Australians. They also know how many of their voters expect it.

The Liberal concerns about the Religious Discrimination Bill are so great that Morrison has chosen not to put the bill to a vote in the lower house in the week ahead. This is a rational decision. Some of the Liberals would probably cross the floor against the bill in its current form.

While Morrison believes in the bill with a passion, he has made a decision on cold logic rather than his personal faith. The bill may not be passed before the election. It will go to an inquiry over summer, with a report due by February 4, in time for Parliament to return on February 8.

There will be very little time for an agreement on religious freedom before the election campaign. After the mess of the past week, Morrison may not want Parliament to return at all. The chaos has shifted some in favour of a race to the polls in March, although Treasurer Josh Frydenberg would probably prefer a budget in April and an election in May.

The same dynamic works on the other side of the Coalition when conservatives rebel and appeal to electorates in Queensland or the regions. But most of those who crossed the floor on vaccine mandates this week were in the Senate, like Gerard Rennick from Queensland.

The lone conservative who went rogue in the lower house this week was Nationals MP George Christensen, on a vote on class action laws. He also endorsed civil disobedience on vaccine mandates, an irresponsible call when protests have turned violent.

Morrison applied a double standard by calling Archer into a meeting to give her a frank talk about her rebellion but not doing the same with Christensen. The moderates usually get more heat when they speak up.

He may end up thanking Archer one day. The Liberals need to hold Bass and there is a chance she can do it. The Liberals also need to hold city seats against a rising challenge from independent candidates who campaign on social issues and climate change. Those campaigns can play on Morrison’s falling popularity.

That means Morrison can win when Liberals go rogue. Some of them may save him from himself.