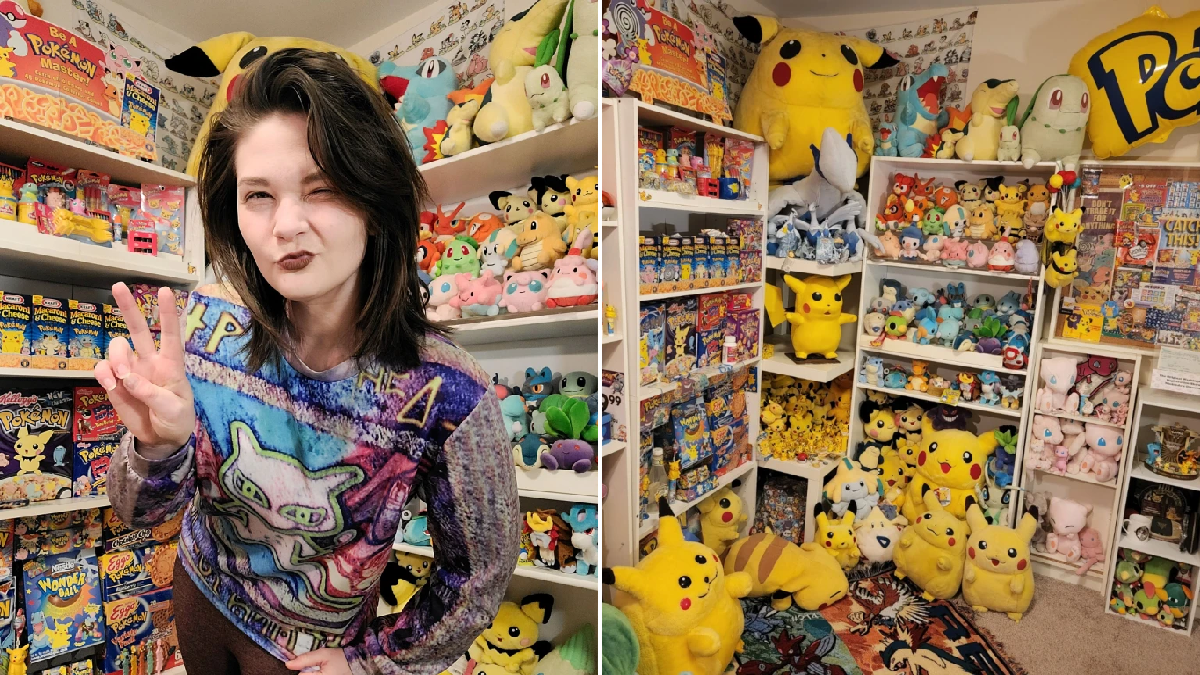 A freelance worker has shared the details of her impressive Pokémon collection, which includes but is not limited to plushies, food wrappers and special edition cars.

Grace Caroline, 26, has spent the past 13 years amassing items, which are worth a staggering £42,000 in total.

She said: ‘I own one of the ten Pikachu VW Beetles which was used for promotional reasons back in the late 90s.

Grace, from Richmond, Virginia, even has a one-of-a-kind Pokémon centre New York clock which could sell for more than £4,750 [$6,000] second hand.

Grace said: ‘I loved the cartoons and the game Pokémon Mystery Dungeon on the DS when I was a kid.

‘In high school, when everyone was going through their “scene” phase, it was common for people to collect and be obsessed with stuff so I decided that my niche would be Pokémon.

‘I’m not the biggest fan of new items, I really focus on buying vintage collectables and weird items like food wrappers and adverts from magazines.

‘eBay, Facebook Marketplace, thrift stores and yard sales are usually my go-to when searching for valuable vintage items, but there’s always a lot of competition.

‘I especially love vintage promotional items and other pieces from the late 90s, and early 2000s.’

Grace’s collection consists of more than 300 separate items such as adverts from magazines, bubble bath, jumpers and t-shirts, and her precious Pikachu and Lugia Pokémon cars.

‘My all-time favourite piece,’ she said, ‘besides the NY Pokémon centre clock, is a promotional Pikachu plush with a parachute that Nintendo threw out of planes as a part of an event, they cost around £470 ($600) now.

‘The weirdest parts of my collection include promotional food containers like a Pop-Tart box, Eggo Waffles, Kellogg’s boxes and some Betty Crocker bits and pieces. I just really love the artwork.

‘Plushies are also a big part of my collection. I’ve got a lot of Pikachu ones, a whole shelf full of Mews and a few more of the 151 originals like Snorlax, Squirtle, Jigglypuff and legendary Lugia.’

She added: ‘I’m hoping to open a Pokémon Museum one day and have my cars and vintage items on display for everyone to enjoy.

‘I spend my spare time looking for video and pictures of Pokémon promotional events that have been lost to time and have managed to source some things from all over the world.

‘There was once a Pokémon-themed pirate ship event over in Australia, which I love the idea of, and I’m on the lookout for more footage.

‘I’ve also got some of the Pokémon New York centre which has very little footage due to it only being open for about four years in the early 2000s.

‘I display everything I find – I also accept submissions over on my website.’

Even though her collection can provoke some mixed reactions online, it’s a hit with family, friends and comic convention fans.

She said: ‘People have sent me gifts from all around the world, whether it be food boxes they’ve held onto or other neat pieces.

A price breakdown of some of Grace’s items

‘I take the cars to comic cons and people love them, especially the fact they can sit in them and have pictures with this one-of-a-kind vehicle.

‘My partner, Ryan, 26, isn’t really into collecting, and isn’t the biggest fan of Pokémon, but he is always happy to help me look for items.

‘The only downside is the nasty comments I get on TikTok, people tend to voice their opinion that my money could be better spent elsewhere like on the homeless.

‘I don’t have that much money, and with it being a 13-year collection, I’ve really not spent all that much when you compare it to people who get their nails and hair done every month, and a lot of my items have increased in value over that time too.

‘I just love vintage Pokémon items, and I use social media to share that passion with other fans.’