Matt Nable is often cast as a tough guy. Strong, sometimes menacing, frequently a man of few words. You might’ve seen him as a police detective in Underbelly, a motorcycle-gang leader in Bikie Wars: Brothers in Arms, a relentless swimming coach in Barracuda, a hitman in Mr Inbetween, or a tormented father in The Twelve. 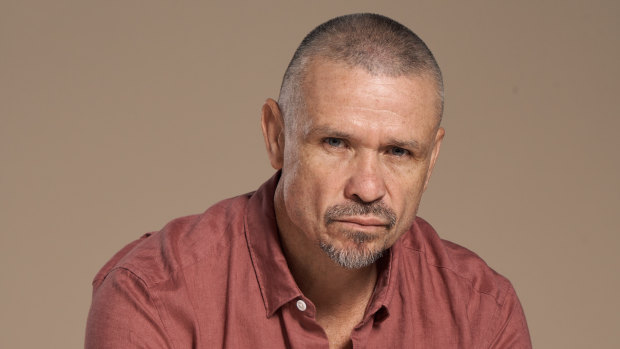 Matt Nable: one of our busiest actors.

You might’ve seen him in many places as he’s one of the country’s busiest actors. Last year, while juggling four jobs, he recalls, “There were a couple of days when I woke up and I didn’t know where I was.” As to the type of role he attracts, he says, “I own a mirror and I know that I don’t look like Brad Pitt. I’ve got a fairly rugged sort of a look and I come from a very physical background. So that’s followed me.”

Unlike the characters he often plays, the former NRL player is more like a Renaissance man: the author of four novels and three screenplays, the married father of three who likes to cook dinner. Now, he’s further expanded his repertoire with Transfusion, a film that he wrote and stars in with Sam Worthington, and that marks his directorial debut. In the brooding drama, he and Worthington (Avatar, Fires, Terminator Salvation) play special forces soldiers who’ve done their duty in war zones and are now trying to adjust to life back home.

At one level, Transfusion explores the difficulties facing men whose courage, aggression and physical prowess is valued in one sphere – here it’s a war zone – but must then return to the routines and requirements of civilian life. They’ve been part of a tight-knit team, a brotherhood, and some of them thrived on the adrenaline rush triggered by their work. 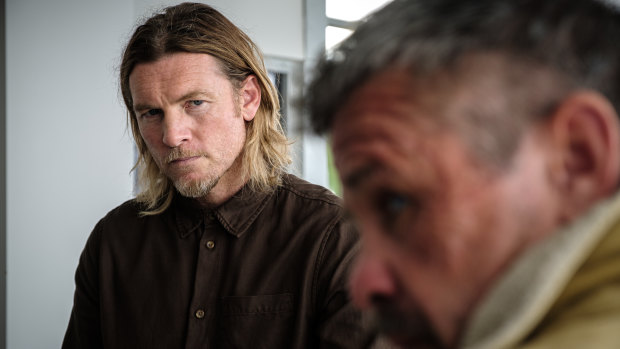 Nable plays Johnny, an explosive loose cannon, and he explains, “For me, Transfusion’s always been a father-son story. I grew up as an army child and we moved from place to place every two years, so that was a world that I knew really well. I knew a lot of those men and I also did a lot of research with SAS guys.”

Following a sequence that establishes his combat skills, the film cuts to Afghan war veteran Ryan Logan (Worthington) at home in Australia. Events that occur on a camping trip lead him to reassure to his hesitant young son, Billy (Gilbert Bradman), that “there are many ways to be brave”.

Soon after, the film flashes forward, presenting a radically different picture of the pair. The once-elite soldier has become a husk of a man, hollowed out by grief, his son is a sullen teenager (Edward Friday Carmody), and there’s a painful chasm between them. The film then explores how they grapple with their relationship to each other and to the wider world.

Nable was motivated to direct Transfusion by a desire to shape its tone. “I’d written a couple of films that I didn’t direct (Outlaws, The Final Winter) and although they were executed well and did well on a number of fronts, they didn’t strike the tone that I’d wanted when I was writing,” he explains.

He says that his aim here was to tease out “what lies beneath”, and the tone that he’s achieved, with the aid of cinematographer Shelley Farthing-Dawe, is one of quiet intensity. As a debilitating desperation engulfs father and son, in part as a consequence of their fractured relationship, events involving each of them spiral out of their control.

“In my experience, violent men aren’t always violent,” he says. “There’s remorse and introspection. Masculinity is a fluid thing: there’s enormous vulnerability there, and fear. Even with Johnny, there’s an overt violence to that man and a masculinity, but below everything there’s a horrible sadness that he veils with that type of behaviour. That fascinates me because I grew up a very physical young boy and adolescent and a man, so I was around a lot of those people. I was very attuned to the ways that behaviour is exhibited and where it’s coming from: it’s not just bravado manifesting itself in abhorrent violent behaviour. There’s a lot more going on.”

Part of the subdued mood that Nable has achieved comes from the film’s beachside setting, although it’s not one that suggests rest and relaxation. ” We chose Maroubra, a southern beach not far from Bondi, but a different world,” he says. “And we shot in winter, so there was a real bleakness and greyness that sort of mirrored where Logan was. I liked the texture of moving water, the choppiness of the sea, the correlation to the situation that these men and Billy find themselves in; the sense of someone swimming against the tide without help, being aimless.”

But while the waves are crashing and the atmosphere becomes dangerously volatile, Worthington’s finely calibrated performance is striking for its stillness. ” I’ve said to Sam lots of times, ‘Mate, you’re the best when you’re still,’” notes Nable. “He’s such a commanding presence. Whatever’s going on internally, whatever his emotional reservoir, he has an ability to live in the moment and stay still.

“He played the role with such a gentle nature and such understanding. He’s the father of three young boys and with this film there was an opportunity for him to play into those things. I think it’s as good as anything he’s ever done.”

With his own acting, Nable estimates that he declines 60 to 70 per cent of the work he’s offered, because the job won’t fit with his family life or because the role will replicate something that he’s already done. He sees writing as his vocation and acting as a career that developed, almost accidentally, alongside it.

“If I’m not acting, I’m writing,” he says. “And I won’t have a day off because it’s not a chore. It’s something that I love doing. If I write five pages of screen a day, I can still drive the kids to school and pick them up, I can go to the gym if I want, I can cook dinner.”

Nable will soon be seen in Last King of the Cross, the Bump spin-off, The Year Of, and the Tasmanian crime comedy-drama Bay of Fires. The year will also bring a film role in the US and projects at Foxtel and Stan. He’s not exaggerating when he says, “I don’t have that much idle time.”

Transfusion is on Stan