Artists can benefit creatively from restrictions, or so we're often told. In coming months that theory will be put to the test, as we start to get a look at some of the feature films made in the latter part of 2020 with strict social distancing measures in place. 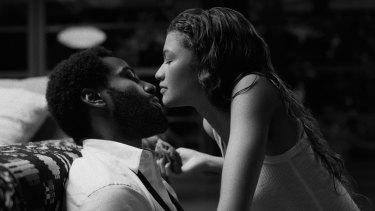 One such entry in the COVID sweepstakes is Sam Levinson’s Malcolm & Marie, a black-and-white two-hander filmed in a single location, devised at short notice after production was shut down on Levinson’s teen drama series Euphoria.

The script was reportedly written in less than a week – and while the pandemic itself isn’t part of the subject matter, Levinson seems to be aiming for another kind of topical urgency, tapping into current debates about how far any artist has the right to tell somebody else’s story.

Malcolm (John David Washington) is an up-and-coming director whose new movie, about an addict trying to get clean, has just been unveiled and looks set to be his breakout success. Back at his swanky open-plan home in Malibu, he’s full of himself and his own triumph, even as he sounds off about his frustration with sanctimonious journalists who have him pigeon-holed as an African-American filmmaker.

Less over the moon is his significantly younger girlfriend Marie (Zendaya, also one of the stars of Euphoria). Though Marie once aspired to act, she does not appear in Malcolm's movie – but her past struggles with addiction served as direct inspiration, making it all the more unforgivable that he forgot to thank her at the premiere. 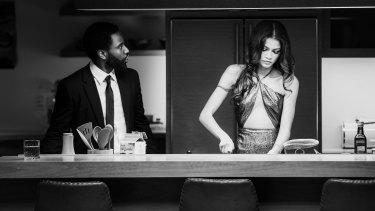 While Malcolm and Marie may not be particularly likeable, they and their lifestyle have been made to look as attractive as possible.Credit:Dominic Miller/Netflix

This sets the scene for a power struggle that spans most of the film, in which the widening cracks in the relationship dramatise the gap between two notions of art. Marie puts a premium on authentic experience, while Malcolm emerges as a bona fide cinephile who values craft over unfiltered truth.

The film itself appears to be on the side of artifice, judging from both the glossy look and the long theatrical speeches. Malcolm’s provocative, sometimes hilarious riffs on film history and culture come close to breaking the fourth wall, as if Levinson were aiming to get in ahead of any reviewers who might wonder what a white director is doing making a film about a black couple.

Both stars rise to the occasion, though they’re faced with different demands. Washington has the easier task, since the script sketches Malcolm’s brash yet insecure personality in a fairly consistent, straightforward way – and tells us a good deal in passing about his background, including his privileged upbringing and the women he’s dated in the past.

Marie, though no less articulate, is more of an enigma. Initially she’s a glamorous, somewhat remote figure, stalking around the house in her shimmering, thin-strapped dress. After taking a bath halfway through, she emerges as a quite different character, sprawling in her underwear with her make-up wiped off; even her voice changes, becoming lower and more relaxed.

Much of the interest of the film stems from the challenge of figuring out Levinson’s game-plan. Is this supposed to be a psychologically realistic study of a relationship, or a conceptual exercise where the characters are vehicles for ideas? And considering how rapidly the whole project was thrown together, how much conscious thought has gone into any of it?

On the visual level, at least, the intentions are clear. While Malcolm and Marie may not be well-matched or even particularly likeable, the goal nonetheless is to make them and their lifestyle look as attractive as possible, by any means at hand.

As this suggests, the paradox of the film is that it’s both a timely intervention and a throwback. For all Levinson’s attention to the ever-shifting “discourse” around cinema, there’s something quite traditional if not outright old-fashioned in his portrayal of the relation between a male artist and his rebellious muse.

Still, some portion of what he retrieves from the past is worth salvaging – including what seems like a total lack of anxiety about being considered pretentious.