Their fear was that naming the report after the man commissioned to conduct it – former Federal Sports Minister Senator Rod Kemp – would accord it too much credibility. 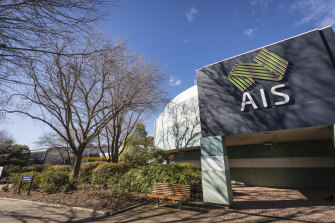 “It’s a Functional and Efficiency Review, standard practice by government and one of 21 rolled out in the past five years.”

Still, it was almost unprecedented for a former federal minister to be recalled to run a review of his old portfolio, particularly one whose reign (November 2001 to January 2007) aligned with the most successful period in Australian sport, in terms of Olympic gold medals and world championships won.

The report’s fundamental recommendation relates to funding. Kemp insists federal allocation of money to sport should be sustained, guaranteed and increased, particularly to the Olympic disciplines. This is consistent with Kemp’s tenure when funding to SA’s predecessor, the Australia Sports Commission, was maximised via the close relationships between then Prime Minister John Howard and the ASC chair Peter Bartels and his deputy Alan Jones.

Kemp was prone to say that sport is a mere “rounding figure” in the budget and must be better resourced in terms of its place in the national psyche.

His report describes decisions around current funding to the largely amateur sports the past decade as ad hoc, band-aid like, declining and knee jerk as resources are allocated to whomever is considered the next gold medal chance.

The second recommendation of the Kemp Report is: what does the government do with the AIS? Once the nation’s premier sports facility, it has been allowed to run down to what has been labelled a “ghost town”. Visitors are more likely to see high school children overnighting in dormitories on visits to Parliament House. Wylie addressed the need to revitalise the facility last year when the Herald quoted him saying, “The AIS is no longer world’s best. We’ve got the site. It would be crazy to allow it to deteriorate.”

A detailed business case for a $200m capital works renewal of the Canberra campus was prepared to be submitted to cabinet after the last election.

But that has been sidelined by the revelations of the $100m sports rorts scandal under the former federal sports minister, Senator Bridget McKenzie.

An Auditor-General’s report found that many recommendations made by SA for infrastructure grants were rejected by McKenzie and her office, the money directed instead to sporting clubs in electorates the Morrison Government hoped to win at the election.

Perhaps McKenzie, like many of her colleagues, did not expect to win the election and therefore be exposed to accountability around the grants. However, what is clear is there is now a poor relationship between the offices of SA and the Department of Sport, as well as Minister Colbeck distancing himself from McKenzie.

Some of the Kemp Report has been leaked to the media, with News Corporation reporting “explosive” revelations about “misplaced priorities”, such as SA management salaries, fly in/fly out executives and advertising campaigns.

While one of the Kemp Report’s contributors concedes it is “a bold report” from a very measured former minister, its main focus is to address what is known to be the central problem of sport: ad hoc funding.

McKenzie did award $54m for young Olympic athlete pathways at the last budget but no money to revitalise the AIS to house them.

Furthermore, $88m was awarded to professional sporting clubs, outside of any role by SA. AFL clubs Carlton, Richmond, Adelaide and Brisbane received $65m, requested for their women’s teams.

The Kemp Report does address the possibility of transferring land on which the AIS is built in order to raise revenue so that it can become a world class facility concentrating on research and athlete rehabilitation. It questions whether the federated model of sport is still sustainable and concedes state institutes may be better at preparing young hockey players and swimmers, rather than force them away from their own homes.

Colbeck visited the site last week, spending two hours talking to sports described as “heavy users” of the AIS and will return next Friday to meet “light users”.

He appears already focused on the central recommendations of the Kemp Report, even as it becomes another game of political football in Canberra.