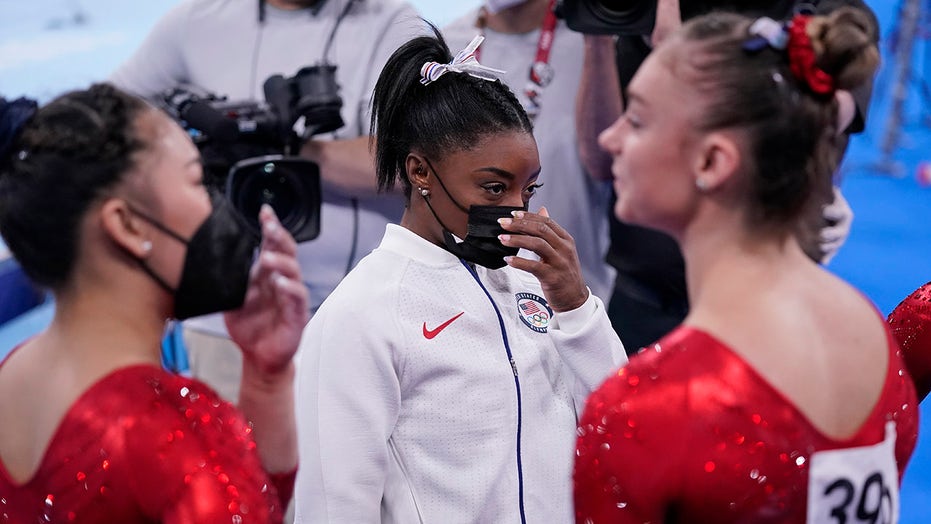 When you spend the better part of a decade redefining the possible within your sport, the standards change. Good is no longer good enough. Sometimes, great isn’t either.

Simone Biles received a crash course on it five years ago in Rio de Janeiro.

The American gymnastics star had already won three gold medals at the 2016 Olympics when she began her routine in the beam finals. Midway through her set, the then 19-year-old lost her balance, as tends to happen when trying to execute world-class skills on a piece of wood narrower than the average iPhone. She reached down to steady herself, preserving a bronze in the process.

She was pumped. Others weren’t.

Fast forward to team finals in Tokyo on Tuesday night, when the “demons” Biles has been grappling with for years proved to be too much. Spooked when she couldn’t get comfortable on vault and burdened by what she described as the “weight of the world,” the 24-year-old instead took herself out of competition.

“I didn’t want to go out there and do something dumb and get hurt and be negligent,” she said after the Americans took the silver. “So, I knew for myself that I had to take a step back.”

Something that’s been increasingly difficult since her return to the sport in the fall of 2017.

She made a promise to herself when she came back that she would be doing it on her terms. Her way. She spent much of the run-up to Tokyo desperately trying to hold onto that vision. She won a world championship in 2018 despite battling a kidney stone that left her in agony and became the most decorated gymnast ever with a five-medal haul in Germany a year later.

Everything was primed for a golden goodbye in Japan last August. Then the coronavirus pandemic hit, pushing the Games back a full 12 months. And everything had to be recalibrated.

She fended off depression, steeling herself to go on. There was a brand to build. Sponsors to please. Fans to honor. Critics — both internal and external — to silence. Much like Olympic greats Michael Phelps and Usain Bolt, the 24-year-old became a prisoner of her own excellence.

To be fair, in some ways she helped build the walls. She’s embraced — winkingly, most of the time — her status as the Greatest of All-Time.

It takes a special kind of swagger to compete in a leotard with a bejeweled goat you’ve nicknamed “Goldie.” A documentary series has spent the last two years chronicling her path. The acronym for the post-Olympic Gold Over America Tour she is headlining this fall is not a coincidence.

A room overlooking the massive gym her family runs in the northern Houston suburbs turned into a TV studio over the spring. Outlets asking for a piece of her time came and went, asking her the same questions over and over again. She accommodated as many as she could. It’s all part of the process.

Internally, however, things were shifting. Her performances during the spring competition were … OK, at least by her standards. Yes, she drilled her Yurchenko double pike vault when she unveiled it in May. She also fell off uneven bars the same night. During the U.S. Olympic Trials in June, she actually finished behind Olympic teammate Sunisa Lee on the final day of the competition, the first time that’s happened in eight years.

Things didn’t get any better in Tokyo. Biles topped qualifying as usual but an uncharacteristically messy block on her Cheng vault sent her nearly sideways off the table. She bounded all the way off the competition mat following one tumbling pass on floor. She carried so much momentum on her beam dismount she took three huge steps backward.

Something wasn’t right. The doubts that have cropped up at times during her career re-emerged. And rather than brush them back, she accepted their presence. They lingered when she walked onto the floor Tuesday for the team final. Her warm-up wasn’t great. Her vault was even worse, as the planned 2 1/2 twists of her Amanar became 1 1/2 instead.

This wasn’t the first time she felt like this. She was a newly minted senior elite at the U.S. Classic in 2013. Things went badly. She fell on each of the first three events. Then coach Aimee Boorman withdrew the 16-year-old from the competition in an effort to protect her from herself.

Asked if there were any similarities between what happened Tuesday night and that forgettable day in Chicago, Biles laughed.

“I was dumb and stupid (back then),” she said. “I was pulled out. I wanted to go out there and compete.”

She’s not “dumb and stupid” anymore. As she sat down with U.S. team doctor Marcia Faustin while waiting for her score to flash inside a stunned, fan-less Ariake Gymnastics Center, she realized she could no longer push through as she’s done so many times before. Too much was on the line both mentally and physically. For her team. And for herself.

A gymnast flying through the air without any idea of where she might be going is a dangerous thing. Biles bent gravity to her will so easily for so long, people forgot there’s no such thing as autopilot.

She didn’t. So she stopped. Right there. Right then. Who knows if it’s the last time she’ll be seen in a competition leotard. She withdrew from Thursday’s all-around final. Next week’s event finals are a mystery.

It’s a decision she is ready to live with. Standing next to her teammates with a silver medal slung around her neck on Tuesday, she finally realized whether everybody else can is their problem, not hers.