Three wins with Sevilla underline that. 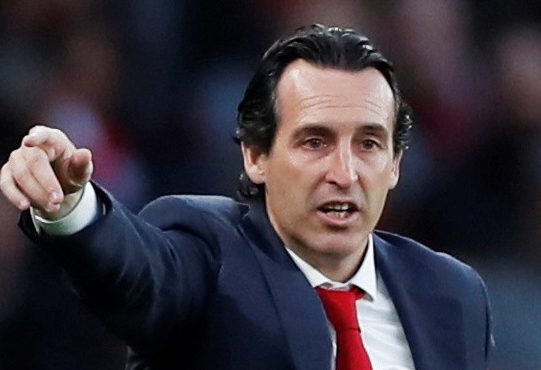 And now the Spaniard knows that making it a fourth title will buy him the chance to rebuild Arsenal in his own image.

It means that the next three weeks will define the entire summer – and beyond.

The Gunners’ 3-1 semi-final first leg triumph over Valencia was, in many ways, a summation of Arsenal’s entire season.

A mess, occasionally an utterly shambolic one, at the back.

But superb going forward, able to carve out chance after chance.

And in the end, just, getting a good enough result to be positive.

Pierre-Emerick Aubameyang’s stoppage-time third transformed a narrow advantage into a potentially substantial one.

It was certainly enough to make Arsenal favourites going into the second leg in Spain next week, taking Emery’s side a step closer to Baku and the final.

Yet while the trophy will be the thing Emery wants to remember, what will matter far more is the options that earning a backdoor route into the Champions League will give him when the transfer window opens.

Arsenal have already briefed that Champions League money holds the key to how much Emery will have to spend.

That the Spaniard needs to recruit at the back is unquestioned.

But very few outside the German’s immediate family and friends would claim that he is good enough for a team with top four ambitions.

Likewise, Hector Bellerin’s long-term absence, and the impact of time on the ageing limbs of Stephan Lichtsteiner, mean recruitment at right-back is an essential.

On the other flank, Nacho Monreal and Sead Kolasinac have plenty of detractors too, while Petr Cech’s looming retirement means more money must be spent to fill that void.

The defence, though, is not the only area where strengthening is required.

Aaron Ramsey’s imminent departure is an obvious issue yet just as many questions are being asked in the middle of the park.

Lucas Torreira’s early-season impact has diminished – is that post-World Cup fatigue or a more pressing concern? – Granit Xhaka remains, at best, a polarising player, while Matteo Guendouzi is still learning his trade.

Add in the Mesut Ozil factor – can even Arsenal really keep on paying £350,000 per week to a player who is far from a guaranteed starter? – and the requirement for Emery to be able to make changes on his own terms is all the more clear.

Arsenal stand to bank a maximum £35m if they win the Europa League.

But getting into the Champions League, even if they would not take any share of the initial £28m “market pool”, would still earn Arsenal £37m BEFORE kicking a ball. With the possibility of earning another £45m-plus from a decent run.

That money would represent a huge part of Emery’s prospective transfer budget.

In addition, of course, the Spaniard would be able to sell the chance to play in the biggest club competition on the planet as part of the transfer negotiations with targets.

Without that carrot, though, and with a lot less to spend, it will make Emery’s mission a far more complicated one.

Complete the task in Valencia and then see off Chelsea or Eintracht Frankfurt, and missing out on the top four would cease to matter.

Fall short, though, and everything would change. And not for the better.

It really is a big few weeks, for Arsenal and Emery.