Tokyo: Daniel Michel is the Australian boccia star who has competed on almost every continent and, according to former Australian cricket great Steve Waugh, is as committed as any athlete he’s ever seen.

While many Australians may not have heard of the sport, Michel is a big deal in the boccia world and competes with his assistant Ashlee McClure. 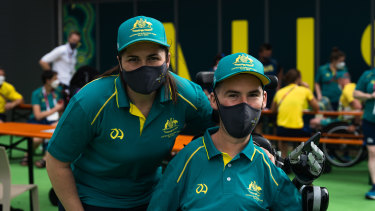 His globetrotting might come as a surprise given the 26-year-old was born with spinal muscular atrophy (type two).

Michel, who at Rio 2016 became the first Australian to compete in boccia at the Paralympics since Sydney 2000, has competed in China, England, Hong Kong, Poland, South Korea, Thailand, Dubai, Canada, the United States and even Colombia.

Boccia is an Australian Institute of Sport-funded high-performance program and, as a top-four athlete, Michel receives about $33,000 a year as part of a DAIS athlete grant.

Growing up, Michel was, like many kids, sport-mad. Rugby league, cricket, you name it. 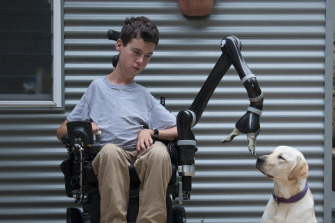 Daniel Michel, pictured in 2013, at his family home. The man behind the camera is Steve Waugh. Credit:Canon Australia

One of Michel’s simple pleasures is going to the SCG New Year’s Test and downing a few cold beers in the stands.

But Michel knew deep down that the odds were stacked against him forging a sporting career.

His severe disability, which effectively means his muscles won’t grow, prevented him from kicking a footy or rolling the arm over.

School life was difficult but, at 15, Michel discovered boccia at a camp for people with a disability and never looked back.

“I think he’s ready for this moment. He’s had it in mind for a number of years and been in his diary.”

“It changed my life entirely,” said Michel, who will also compete in the BC3 pairs event with another rising Australian boccia player, Spencer Cotie, who has cerebral palsy. “From that day on, it’s been my goal to be the best I can in this sport.”

About eight years ago, as part of a Canon Australia campaign, Waugh met Michel and his family and took some photos of the then 18-year-old.

The Steve Waugh Foundation part funded Michel’s robotic arm, which gave him a degree of independence.

Waugh and Michel stayed in touch and on a handful of occasions, the former Test captain popped down to watch the youngster train at Cronulla library, where there is an adjoining council room that he uses. 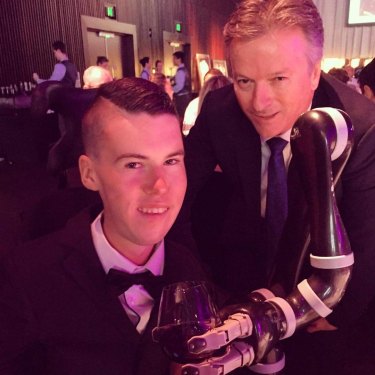 Michel let Waugh have a go too, prompting the rising star to chirp: “He’s scored 10,000 Test runs but can he line up a boccia ramp?”

“He’s as committed as any athlete I’ve ever seen,” Waugh told the Herald.

“I think he’s ready for this moment. He’s had it in mind for a number of years and been in his diary. He’s looked at it, waited for it, and analysed it. 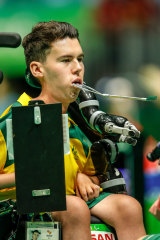 “I bump into Daniel all the time in the shopping centre and he’s got a pretty busy social life.

“He said he’d been to all these far-off places [where] I never imagined they played boccia. He’s all over the world.”

Boccia has been a Paralympic sport since 1984 and tests an athlete’s degree of control and accuracy. It is exclusively for athletes with significant physical impairment.

The aim of the game is for athletes in a wheelchair to propel leather balls as close as possible to a white ball or “jack”, similar to lawn bowls.

Players can throw, kick or use a ramp device to send the balls down, depending on their disability.

McClure, his assistant, is critical to his success. She sits in front of Michel, with her back to the balls, and positions the ramp and balls according to his specific instructions. A remarkable amount of strategy and tactics are involved.

Michel, who has limited use of his arms and uses a robotic one, propels the ball down a ramp using a device he controls with his mouth.

“Ash is essentially the body of the operation. I have to give all of the instructions to her,” Michel said. “She is not allowed to talk to me at all or look at the court. It’s all one-way communication and it has to be really succinct. We have to have a good rapport because we only get six minutes.”

Michel claimed silver and bronze medals at the 2018 world championships in the UK and is now ranked fourth in the world in the individual BC3 category.

Australia hasn’t won a medal in boccia since Atlanta in 1996, but the quiet word in Tokyo is that Michel could be the man to break a 25-year hoodoo.

Michel’s greatest boccia shot? One from the Kansas City Open in 2017, where he knocks one of his balls into a pack that ricochets off those of his opponent and perfectly next to the jack (check it out around the 12-minute mark above). “There is no more satisfying feeling in sport,” he wrote on Instagram at the time.

Michel and McClure train five times a week and were forced to use her garage during COVID-19 lockdown, with boccia courts off-limits. But the pair honed their craft, with Tokyo glory in the back of their minds.

“Coming into my second Games, I’m in a different headspace to the last one,” Michel said.

“This time around, coming in as world No.4, I have a bit of a track record now, so [I’m] feeling a bit better about my ability to perform.

“Rio definitely gave me that hunger to come back and try and do better next time around.”​