Beijing, London, Rio, Tokyo, Paris, Los Angeles … Brisbane? A natural progression if you ask me. It has been a long time coming but finally the Olympic and Paralympic host for 2032 takes its rightful place alongside the great cities of the world.

As a native of the River City, which straddles the mighty Brown Snake (it actually does get a little blue towards the Moreton Bay end if you squint), I know what you are thinking: why didn’t this happen sooner? How can such a masterpiece of subtropical civilisation, where a cool breeze and a cold beer are welcomed with equal vigour, be left out of the Olympic rotation for so long?

The International Olympic Committee (IOC) has corrected some previous errors in confirming Brisbane as the host of the 2032 Games. Powered by former lord mayor Sallyanne Atkinson, Brisbane also made a bid for the 1992 edition. Instead the Games somehow ended up in the notoriously unappealing Barcelona, a city which – at the time – didn’t even have a decent leagues club.

But now we come full circle. Brisbane it is … and the Gold Coast. And the Sunshine Coast. And wherever else we can spread the love in a regional Games that will be the first of its kind in terms of embracing a “hub-and-spoke” model, using venues across the region.

This wasn’t exactly a well-kept secret and the only real surprise was that people still thought there was an element of surprise. Just hours before it was confirmed, Ted O’Brien, the Prime Minister’s representative for the bid, was on Brisbane radio insisting “it genuinely isn’t in the bag”. 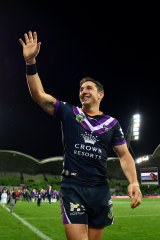 Perhaps Brisbane should have sent Billy Slater to seal the Olympics deal.Credit:NRL Photos

But it was. Ted should have known better than to doubt the “Eight Straight” state when it comes to getting things done in the clutch. If they had sent Billy Slater to Tokyo instead of Queensland Premier Annastacia Palaszczuk, he would have been back in time to offer some expert insights on the Thursday night NRL fixture, IOC contract tucked safely under his arm.

There will be people in Queensland who oppose the Games and believe them to be a gigantic vanity project that costs billions, lines the pockets of IOC titans and causes immeasurable chaos for host cities. I know this because every time I have written an Olympic story for the past six months, the first comment, without fail, is: “Who cares about the Games?”

No matter, for I intend to speak to each and every critic personally over the coming decade. There is almost nothing Queenslanders can’t fix by having a yarn over the fence, chatting about the state of the lawn at various stages of the year or deconstructing State of Origin conspiracy theories.

It shouldn’t take long to win everyone over. Queensland supplies half of the Olympic team anyway, so it makes sense to cut down on travel. And once I paint a vivid picture of Johnathan Thurston lighting the cauldron by curling in a flaming Steeden from the left-hand touchline, they will give themselves over to the cause.

There will be almost a decade of serious discussion about the merits of hosting a Games in the modern era. This is not one of those articles, so I urge you to turn your attention elsewhere for costing breakdowns, funding models and the endless lists of pros and cons of hosting a mega-event in the midst of an identity crisis.

But for what it’s worth, Brisbane is a town of warmth and space, with a population that prides itself on taking things just that little bit slower than the southern capitals. I hope that shines through when the world comes to play in 2032.