Belgium stands in the way of Australia and an Olympic gold medal. But more than that, Thursday’s final will turn the Kookaburras’ defensive discipline and one man, Alexander Hendrickx and his drag flick.

Belgium’s talisman, who will play the final with six stitches in his head after wearing a stick in a pool game, has scored 14 goals during the tournament, 12 from penalty corners at a rate close to 40 percent and has his other two from penalty strokes. 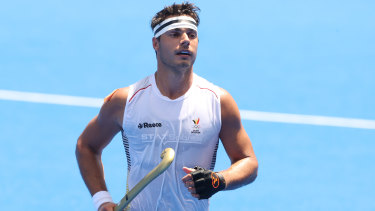 Belgium’s Alexander Hendrickx has 12 goals from penalty corners in the tournament so far.Credit:Getty

The gold medal could be decided by Hendrickx’s stick, which has already produced three hat-tricks at the Games including one in the Red Lions’ 5-2 semi-final success against India.

“I have a lot of confidence in my technique. Throughout the year as well, the corners went well also in the club level,” Hendrickx said. “But with this team, we get a lot of corners during the game, so the more corners we get, the more we can score.”

Australia has to limit his opportunities to fire bullets at more than 150km/h from set pieces if they are to join the 2004 Athens team as gold medal winners. In the 3-1 semi-final win against Germany, they were able to defend in numbers with calmness and composure, and even under intense pressure in the second half, they only conceded a couple of penalty corners.

The Kookaburras worked as a unit in the defence and looked solid at the back then had their moments of inspiration which produced goals from the field, including a brilliant opener against Germans. The pin-point overhead from Blake Govers to Flynn Ogilvie, who brought it down in the circle and then half volleyed the ball across the net for Tim Brand to deflect in on the right post was close to the goal of the Olympics.

Moments like that have been rare for Australia during the knockout phase, where they have not been at their free-flowing best but still found a way to progress.

It will give them confidence that there’s improvement in their attack to help them to gold on Thursday.

“I think some of our defensive work was top notch and some of the guys played really well,” Kookaburras captain Aran Zalewski said. “It was a full, collective effort. We finished our chances and denied them as best we could.

“Just to know that we can do it and play scrappy when we have to. 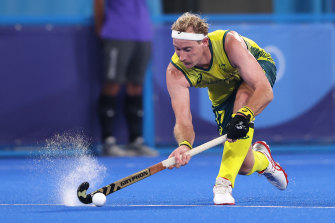 “Not every game’s going to be your way. When you’re leading like that it seems to be the pressure’s on you and the other team’s got nothing to lose, so they come at you full gas.”

Australia beat Belgium in the 2019 FIH Pro League final, but the Red Lions came to Sydney in January 2020 and took a shootout win and a 4-2 victory, which is the last time the Kookaburras were beaten on home soil in normal time.

Kookaburras coach Colin Batch thinks the wins against the Netherlands and Germany in the quarter and semi finals will have his team ready for the challenge of Belgium in the final.

“Germany are a very hard and experienced team, they are very good in these situations so for us perform like that [in the semi-final] will hold us in good stead for the final,” Batch said. “We are learning all the time, for many of the players they haven’t gone through this [sort of] pressure situation [before].”