A senior Japanese ruling party official says cancelling this year’s Olympic Games is an option if the coronavirus crisis becomes too dire, Kyodo news agency reported on Thursday, less than 100 days from the planned start of the Games.

If rising coronavirus cases means “it is said to be impossible we would have to give up,” Toshihiro Nikai, secretary general of the Liberal Democratic Party, said in comments in a television interview, Kyodo reported. 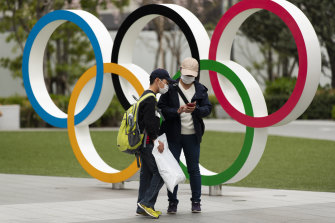 The Tokyo Olympics are due to begin in less than 100 days.Credit:AP

Japan is grappling with rising coronavirus infections, with numbers trending higher in Tokyo after the government ended a state of emergency, and Osaka suffering a record number of cases.

The government is pushing ahead with preparations incorporating social distancing measures and restrictions on spectators for the Games set to begin on July 23.

Polls indicate little support in Japan for holding the Games during a global pandemic. “Cancelling Olympics” was trending on Twitter in Japan on Thursday with more than 20,000 tweets from users.

Olympic organisers did not immediately respond to a request for comment.

Earlier this year, a report surfaced suggesting the Japanese government had concluded the coronavirus pandemic would force the event to be cancelled.

“No one wants to be the first to say so but the consensus is that it’s too difficult,” the report quoted a highly placed Japanese government source as saying. “Personally, I don’t think it’s going to happen.”

But Japanese government spokesman Manabu Sakai shut down that report within hours. “There is no truth to the report,” he said at a press conference.

John Coates, the Australian Olympic Committee president and International Olympic Committee vice-president, insisted in January plans for the Tokyo Games were “proceeding fully”, saying there had been no discussion among organisers about another postponement or cancellation.