Prince George felt the heat on Centre Court, but Novak Djokovic was ice cold: CHRISTOPHER STEVENS’ view from the sofa as the Wimbledon men’s final attracts some very regal onlookers

He threw tantrums. He swore, he argued with the umpire, he picked fights with the crowd. But in his first Grand Slam final, the 27-year-old was comprehensively outclassed by Novak Djokovic.

Yelling insults at himself and his own supporters whenever he got frustrated, Kyrgios was left looking like a cartoon character.

The BBC tactfully tried to muffle its microphones whenever the short-tempered Aussie got vocal. But on a couple of occasions, chief commentator Andrew Castle felt obliged to ‘apologise for the language’ as fruity F-words were audible. 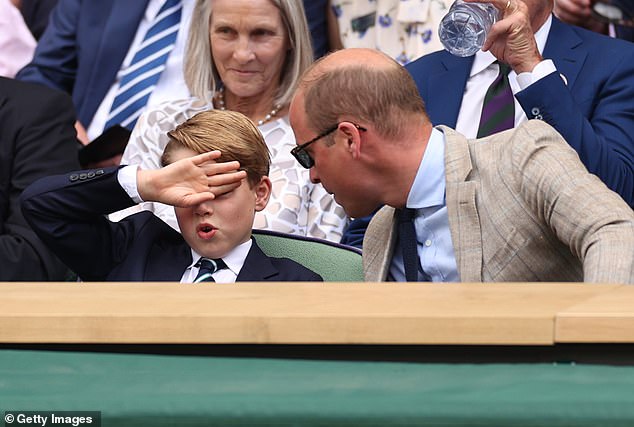 Prince William lost his patience with George once or twice during the hot, heated men’s final 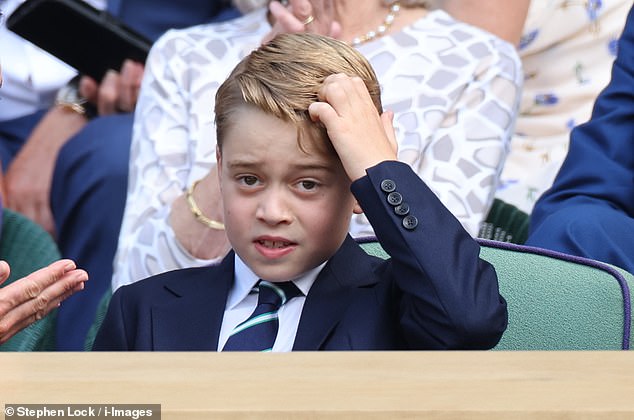 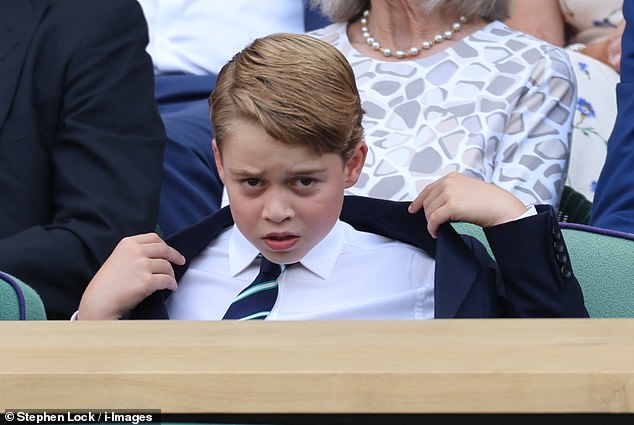 In a blazer and tie, the third seed for the throne had to contend with a hot head of his own

The profanity was not as excruciating as the prose poem that opened the Beeb’s coverage, however – in which tennis racquets were described as ‘catgut light sabres’. What? Perhaps the only spectator who could possibly be shocked by Kyrgios’s swearing was eight-year-old Prince George, seated in pride of place in the royal box between his parents, the Duke and Duchess of Cambridge.

Neatly buttoned in a blazer and tie – the dress code for men in the Royal Box – the third seed for the throne had to contend with a hot head of his own. He was spotted wiping his brow and adjusting his jacket amid the sweltering Sunday sunshine at SW19. But he remained dignified throughout – the polar opposite of Bart Simpson.

Mouth open and forehead knotted in a tiny frown, George appeared to be following the match intently. He was certainly enjoying himself more than at the Wrinkly Rockers party outside Buckingham Palace for the Platinum Jubilee celebrations last month.

Who can blame him? The tennis stars are a little closer to his own age. Combine Djokovic’s 35 years with Kyrgios’s 27, and they’re still 15 years younger than Sir Rod Stewart – who, at 77, is even older than Grandpa Charles.

At George’s side, Kate radiated summer chic in a navy blue dress with white polka dots. 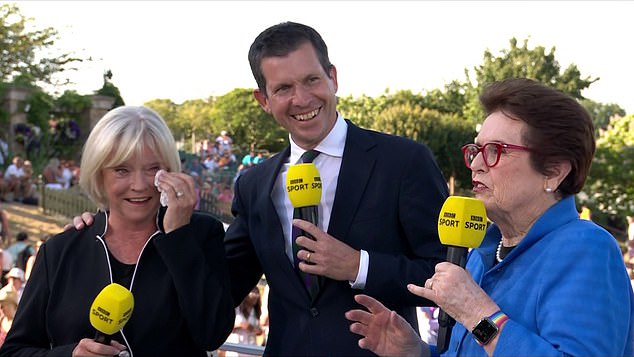 It came as Sue Barker shed a tear in her final SW19 appearance ,with Tim Henman and Billie Jean King 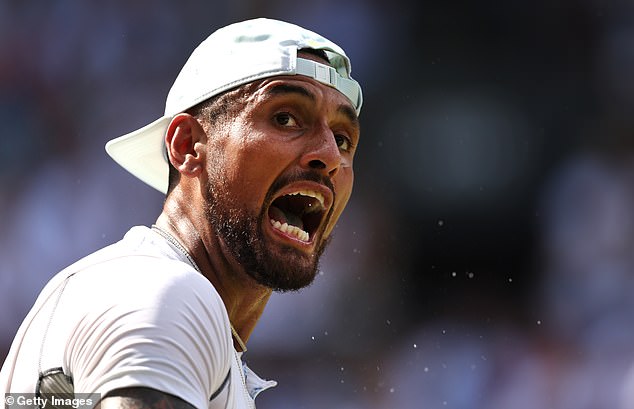 In his first Grand Slam final, Kyrgios, 27, was completely outclassed by the Serbian champion

And Prince William seemed positively continental in a pale beige jacket, fit for a playboy on the Croisette at Cannes. But the prize for most eye-catching costume of the afternoon had to go to Novak’s wife, Jelena. In a pink cupcake frock, knotted at the back with a huge bow, she looked like she was auditioning as Villanelle in the remake of Killing Eve.

On court, it was her husband who played the close-eyed hit man, punishing every mistake his opponent made with cold, lethal precision. It’s apt that, while many players hit the ball with explosive grunts and shouts, Djokovic rarely makes a sound. The Serbian assassin plays as though his racquet is fitted with a silencer.

There was nothing silent about Kyrgios. Serving in the third set, when the match was balanced on a knife-edge, he was distracted by a woman in the audience. Asked by the umpire to identify her, he yelled, ‘The one with the dress, the one who looks like she’s had about 700 drinks, bro!’

You have to feel a little sorry for the woman. A couple of glasses of champagne on a roasting hot day, a punnet of strawberries too many, and suddenly she’s Katie Price. Kyrgios took a long time to regain his composure. By the time he did, he’d lost the set and, effectively, the match. Djokovic cruised to a tiebreak in the fourth set and won easily, without ever seeming to reach top gear. 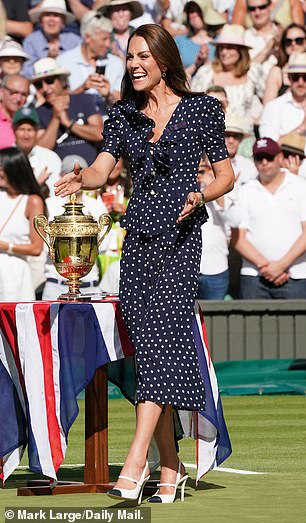 Andrew Castle casually referred to Djokovic as ‘the greatest player the game has ever seen’ but surely, by any measure, that title belongs to Nadal – victor in 22 Grand Slams compared to Novak’s 21, and by common agreement the winner of the best match ever played at Wimbledon… the 2008 final against Roger Federer. English crowds do love a lost cause and, the more the match slipped away from Kyrgios, the louder his support grew. One hopeful wag bellowed, ‘Taxi for Djokovic!’ but by then he must have had a helicopter on standby – ready to whisk him and Jelena away to a romantic dinner, to celebrate their eighth wedding anniversary.

Before the end, Castle was reduced to offering psychological analysis of Kyrgios’s ‘complex character’. He made flattering comparisons to former greats Ilie Nastase, John McEnroe and Jimmy Connors.

Co-commentators Tim Henman and Todd Woodbridge had largely fallen silent. There’s only so many ways they could say, ‘Djokovic is bound to win here.’

At least they didn’t lapse into prose poetry.