Dame Noeline Taurua has signed a contract with Netball New Zealand to coach the Silver Ferns through until the next Netball World Cup in 2023.

The World Cup-winning head coach will guide the Silver Ferns at next year’s Commonwealth Games and then look to secure back-to-back Netball World Cup titles in South Africa in 2023.

Taurua is preparing to name her squad for next month’s Constellation Cup series against the Australian Diamonds and signing a contract of this nature, is something that’s a new move for this esteemed head coach.

“This is the first time that I have actually signed a long-term netball contract,” she said openly.

“For me, I feel extremely positive about the direction that netball is going in New Zealand and I want to continue to be a part of that. I’m incredibly proud of where we have come from but also really excited about where we are going to next.

“I have loved the energy that has come from Netball New Zealand, the athletes, management and the netball community in ensuring our game moves forward.”

Noeline has a proven record at all levels and is an outstanding coach and leader. Just as importantly she has played a major role in driving our high performance netball community in the same direction. Under Noeline’s watch we have seen growth within our Silver Fern environment in many areas, and we’re excited about the future of our national team.

New Zealand are in safe hands doing it the ‘Taurua way’ When Taurua stepped into the role of head in 2018, the Silver Ferns had just come off the back of the worst Commonwealth Games campaign in their history.

Since 1998, they had won five medals at the competition, including two golds and three silvers, and yet on the Gold Coast they finished fourth.

Once Taurua was appointed, she instantly set about doing things her way. If New Zealand were going to get back to where they belonged in the world order, then they would get there the ‘Taurua Way’, and that has paid dividends.

One non-negotiable element that Taurua laid down early was the level of fitness she expects from any player who wants to wear the black dress. If you don’t meet that standard, then it’s very simple; you don’t get selected, you’re dropped or you’re sent home from camp.

Nearly two-and-a-half years on from her arrival, we’ve many examples of this in practice, and it doesn’t matter who it is. Taurua, who asks for a 16.3 minimum yo-yo test standard, is not the type of coach to set a rule but then bend it for a certain individual.

“It’s a consistent measurement we’ve had since I’ve been head coach. It’s pretty 101, I think, for us within our environment,” she said to Stuff NZ, after sending home five players from a recent camp.

The head coach’s focus on fitness is to ensure that her players can handle the rigours of elite-level netball and deliver on the game plan that she sets. Her belief, which was quoted during a Viva interview, is that “fight and fitness is the difference between elite sides winning and losing”.

The players learnt really fast that if you want to be in the Silver Ferns and play that type of game that we do, then they must be fit.

Tactically Taurua brings an enormous amount to the table too. She’s regularly hailed as the best coach in world netball and she knows the importance of setting the foundations away from national camps too.

Taurua spent the last ANZ Premiership season working directly with clubs. She was immersed in their work on match days and it’s something that Tamsin Greenway applauded.

“She has been sitting on the benches of most of these teams throughout this season and she’s been in the ear of the coaches,” Greenway said at the end of New Zealand’s domestic season. 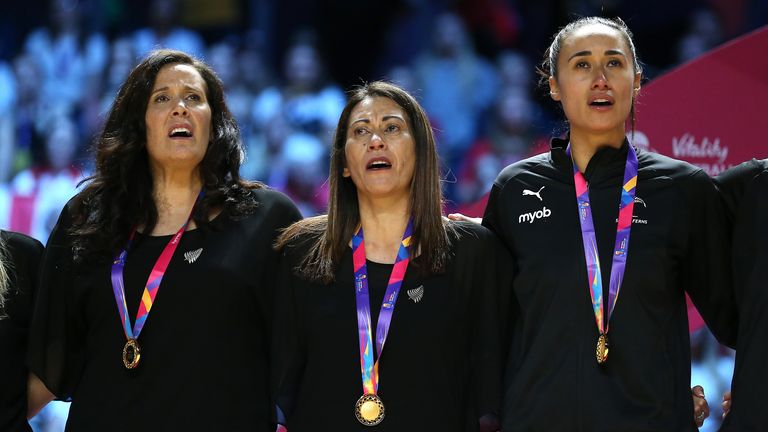 “I think when you look at what New Zealand do so well – and it works across rugby as well – they have a style and the clubs adhere to that style and produce players who can play on the international stage.”

Noeline Taurua has got something that is very special that you can’t teach people. I said I was scared of her before the tournament because tactically the woman is a genius.

Added to Taurua’s high standards and tactical nous, is a deep-rooted love of her country and her sport.

The head coach made her own international debut in a black dress in 1994 and played for the Silver Ferns at the 1995 Netball World Cup and the 1998 Commonwealth Games.

Her career was cut short after just 34 Tests due to a serious knee injury, but you expect that will have just added to her passion for netball and her desire for the Silver Ferns to set the standard.

Finally, Taurua knows how to create a culture and ensure that a group of players work for each other and work for her. She brings them together as a collective and also builds individuals’ confidence levels, something that Maia Wilson experienced and told Sky Sports.

“I felt like Nols had 100 per cent confidence in me to put me out there [during the Vitality Nations Cup], and to know that someone so amazing, who is so knowledgeable in all things netball, has the confidence to put me out on court and give me a starting spot, it’s such a boost.”

With the security of Taurua being at the helm until at least the end of the 2023 Netball World Cup in South Africa, New Zealand are in moving into the second half of this international cycle in a very positive position indeed.

The 2020 ANZ Premiership season, which was played in full, showed the wealth of talent that they have within their ranks. Then, fact that they were displeased about their work during their whitewash of England at the end of October, further highlights the standards that they set themselves.

When the news was broken that Taurua had signed on the dotted line, every netball fan in New Zealand would have done a little dance and skipped around their houses. At the same time, every other national side realised that the gauntlet just became a little more challenging.

Sky Sports is your home of netball. The Vitality Netball Superleague continues on Sunday with Round Three and four back-to-back matches available to watch on the Sky Sports YouTube channel from 12pm.

Here’s How Much Dev Patel Is Really Worth