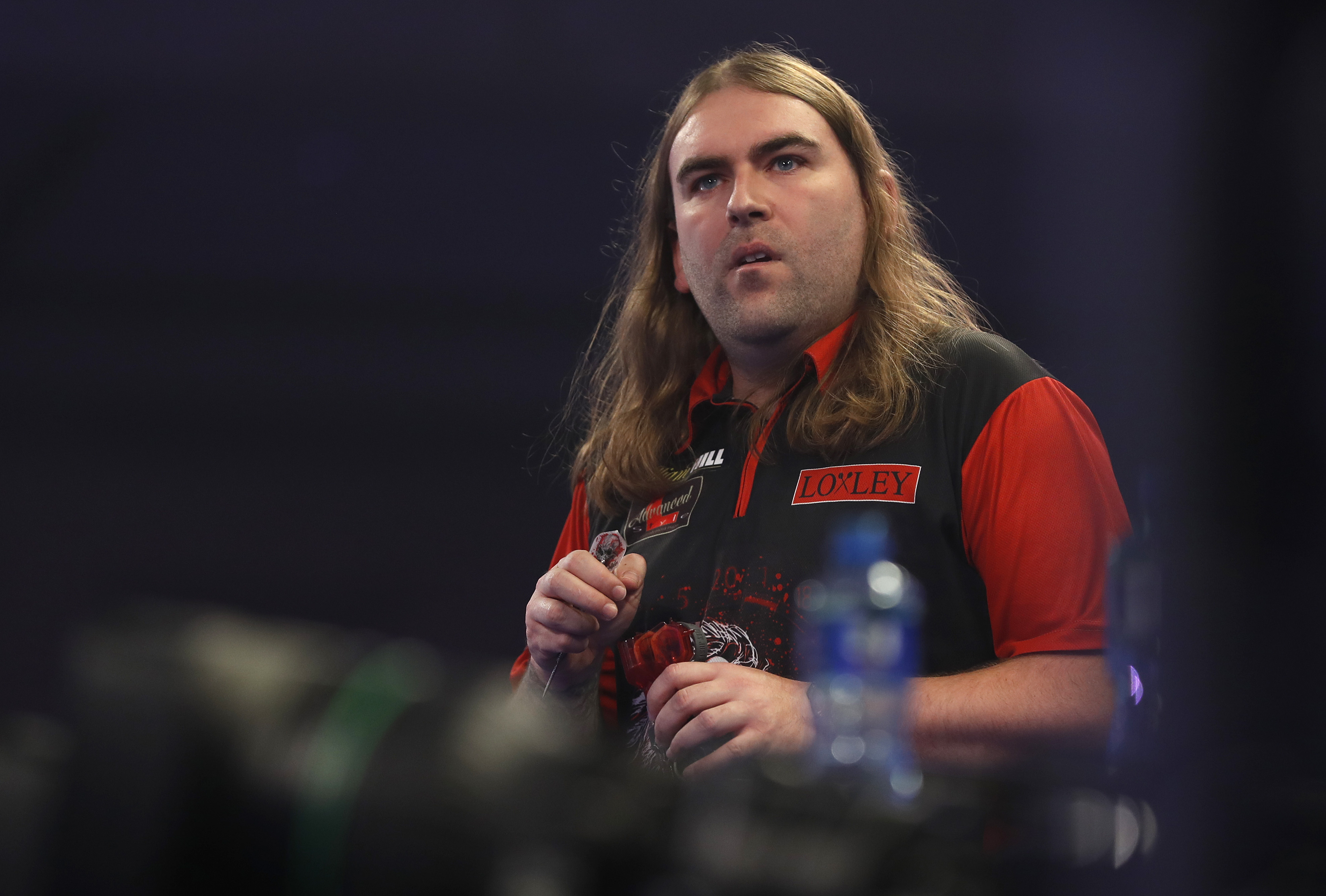 Ryan Searle has become one of the most recognisable figures in darts in recent years and the man known as Heavy Metal is happy to stand out from the crowd.

The 34-year-old has been plying his trade in the PDC since 2016, but has really started to make serious progress over the last three years and is becoming a genuine contender among the world class pool of talent.

Searle has picked up a couple of Players Championship titles and been to three more finals this year, along with a run to the quarter-finals of the World Grand Prix, so his darts are becoming as noticeable as the man himself.

His darts are part of his character, though, with his unusually weighty arrows all part of his personality.

‘I throw 32g darts,’ Searle told Metro.co.uk ahead of the Ladbrokes Players Championship Finals. ‘I think the average is about 23g, but I just like throwing a heaver dart.

‘Part of it is I like being a bit different, I’ve got long hair, not many other people have, no one else has got heavy darts so I just thought I should use them.’

Searle’s flowing locks and weighty tungsten have earned him his Heavy Metal nickname, a gimmick he wasn’t sure about, but is now fully on board with.

‘I’m really happy with the nickname,’ he said. ‘The PDC were half pushing for me to have one and I wasn’t sure, I didn’t want them to stick me with something terrible.

‘But I can half thank Dan Dawson for it, I was toying with Heavy Metal, then in an interview he mentioned it as well so that made me think I’ll stick with it.’

Asked whether he has the musical taste to back up the moniker, Searle confirmed: ‘Yeah, I like System of a Down, Papa Roach and the old stuff as well, Iron Maiden and Black Sabbath, all sorts.’

While Searle may look a bit different to most darts players, he sees completely differently and this is really what makes him stand out from his rivals.

The man based in Holcombe Rogus, Devon, has amazingly poor eyesight for someone who makes a living throwing objects at very small targets.

He explains that he has astigmatism, but otherwise his eyes are healthy so there is little opticians can do to improve his blurred vision.

‘There’s nothing they can really do to fix it, it’s more of a genetic thing,’ Ryan explained. ‘My mum has really bad eyesight and they don’t really know why, it’s just bad. Her eyes are healthy but for whatever reason they don’t work overly well. My dad’s the same so it’s both sides of the family.

‘They said laser surgery wouldn’t work because there’s nothing actually wrong with my eyes. My right eye has astigmatism, my left eye has it slightly as well. It means your eyeball isn’t round, it’s like a rugby ball shape, it means light doesn’t go into your eye properly.

‘That’s part of where my improvement has come from because I’ve only had contact lenses since, not the last Worlds but the one before. That’s when I’ve been starting to improve, being able to half see what I’m going for rather than it being half blurry.

‘It’s quite blurry, it’s weird. I’ll throw and I think I’ve hit treble 5 in the corner, but it’s actually treble 20. I can’t see the point of the dart really. If I go for bull or 25 that’s the worse, I can hardly tell what’s what when I go for that.

‘The contacts have helped, but I played for 10 years with blurry vision, I don’t know how I managed to get a tour card and finish second on the Challenge Tour with my sight the way it was.  I didn’t know any different. The lady in the optician said it’s amazing I can do what I do, she knows what I can and can’t see, but she doesn’t understand why I can’t see.’

Alongside the contacts, lengthy practice sessions with Gary Anderson have been helping Searle’s game and he feels the two-time world champion has been getting plenty out of them as well.

Anderson said at the Grand Slam last week that he s just been trying to keep up with Searle, but Ryan says he’s being generous.

‘Hopefully he will want to keep it up leading up to the Worlds and we can both do some damage. It’s good, I take my friend up who marks the games, we just go at it all night. We’re both fast paced and obviously he’s world class, you can’t afford any mistakes and that’s what you need to be practicing against.

‘He’s easily one of the best still. He keeps saying to me that next year he wants to take it more seriously and hopefully he does because it’ll help us both out. I’m not ruling out a massive run for him at the Worlds now, if he keeps up his practice. He was talking about me going up there three or four times a week, I’d be up for that.

‘It’s always Gary I practice with, my girlfriend’s brother comes round for a practice sometimes, but there’s a slight difference in class to Gary Anderson.’

Searle is ranked #22 in the world and with two PDC titles to his name, but he is aiming for much more than that having built up his confidence in recent years.

He is aiming for a spot in the top 16 next, but does not plan on stopping there.

‘Now I’m closer to the top 16 and that’s the next goal. I think I’m seeded for the Euro Tour this season, I’m not defending anything on that, so that’s massive and hopefully I’m heading on up.

‘I know on my day I can beat anyone and if I didn’t believe I could win I wouldn’t bother turning up to events, I don’t see the point.

‘I turn up to win, but when I first got my tour card I probably didn’t believe that, I wasn’t sure if I belonged in the same room as Michael van Gerwen, Peter Wright and Gary Anderson. But four or five years later I’ve beaten all those people and I feel I’m where I belong.’

Searle gets his Players Championship Finals campaign underway on Friday at 12.45pm live on ITV4.