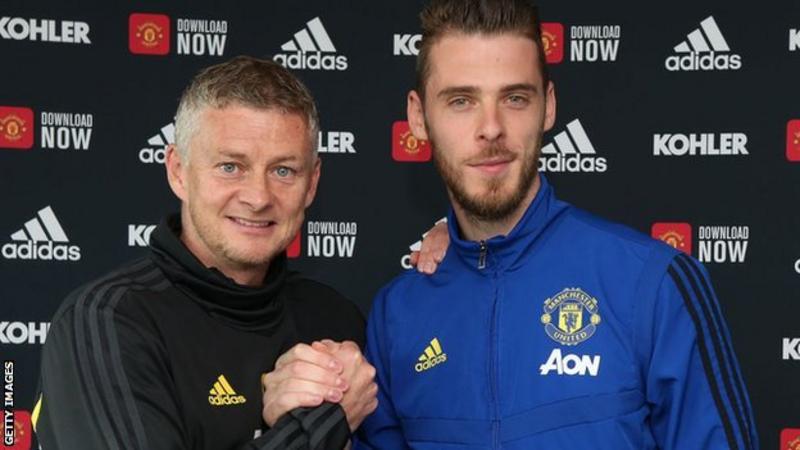 Manchester United goalkeeper David de Gea has signed a new contract to stay with the club until 2023.

De Gea, 28, has made 367 United appearances since Sir Alex Ferguson brought him to the club from Atletico Madrid in an £18.9m deal in June 2011.

“Now my future is fixed, all I want is to help this team achieve what I believe we can and win trophies again, together,” said the Spaniard.

“It has been a privilege to spend eight years at this great club.”

De Gea, who helped United win the Premier League title in 2012-13, the FA Cup three seasons later and both the League Cup and the Europa League in 2016-17, added: “The opportunity to continue my career at Manchester United is a genuine honour.

“Since I arrived here, I could never have imagined I would play over 350 games for this club.

De Gea, capped 40 times by Spain, added: “I still feel I have so much more to achieve at the club and I truly believe that Manchester United can build on the club’s tradition of success and reward our fans for their support.

“I am committed to continue repaying the fans for all of the care that they’ve shown me during the good times and the bad.”

De Gea has played in all five of United’s Premier League games in 2019-20 with the club fourth, seven points behind leaders Liverpool.

United boss Ole Gunnar Solskjaer said: “I am delighted that David has committed his long-term future to the club.

“Over recent years, David has proved himself to be the best in the world and a vital part of our plans as we look to take Manchester United back to where it belongs.”

The Norwegian added that De Gea “represents everything you want in a goalkeeper”.