Whyte knocks out Povetkin in the fourth round

Revenge was sweet for Dillian Whyte after wiping out Alexander Povetkin in four flawless rounds to catapult himself back into contention for a world heavyweight title.

The elated Briton, now in possession of the interim WBC world heavyweight title, allowed himself to soak up a glorious performance in Gibraltar after grasping redemption. The win firmly positions himself at the front of the queue behind Anthony Joshua and Tyson Fury, once the world heavyweight champions crown an undisputed king later this year.

Patience has challenged Whyte throughout his career as much as any opponent and his questionable wisdom was validated after daringly opting to seize an immediate rematch here.

A second loss to the dangerous Russian veteran, having stunned Whyte at the Matchroom Fight Camp last summer, would have left him with a long road back to the pinnacle of the sport.

The 32-year-old has endured a complicated path in pursuit of glory, both inside and outside the ring, after clearing his name from a doping charge and suffering from last year’s upset.

Preparation for this fight was also interrupted by the Russian contracting Covid-19, while Whyte’s training was overseen by an evolving team, with lockdown measures meaning he was stranded in Portugal.

But any desire to patiently pick apart the Russian having circumvented these complications was discarded after that first bell. Both fighters, in fact, erased any doubts about resuming their ferocious exchange in a frenetic opening stanza.

Povetkin stumbled within seconds of trading leather, as Whyte immediately started to load up on his shots.

A chopping right from the Briton landed crisply on the Russian, whose face quickly displayed a blemish as the crowd roared.

But clever movement from the veteran heavyweight in the third saw him start to steal an inch in an attempt to move into that perilous range.

But for all the talk of sheer violence, there was also grace to The Body Snatcher’s work, with the efficiency of his jab sometimes forgotten. 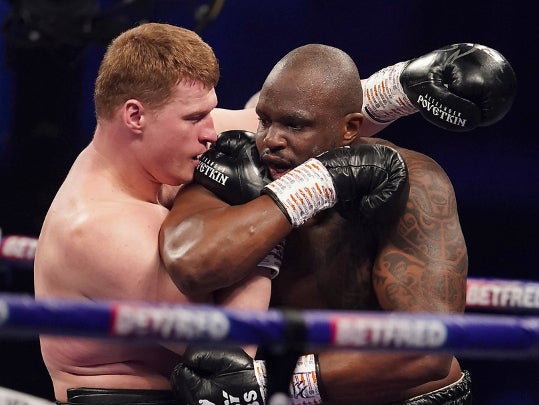 Whyte and Povetkin grapple in their rematch in Gibraltar

It repeatedly speared into Povetkin’s face, gradually draining any hope of a an all-out war and a repeat of that knockout blow in Essex.

That composure and control from Whyte became apparent in the fourth and it allowed him to gradually manoeuvre Povetkin into a position to deliver his own dramatic conclusion.

Whyte hurt his opponent once more with a classic straight right, sending Povetkin sprawling into the ropes.

But rather than rush in, Whyte carefully picked his shots in a bid to solve this Russian puzzle, exposing his sloppy defence with a smart jab, before another thudding right.

And after wobbling Povetkin, Whyte finally sensed the moment to deliver his signature punch, ruthlessly unleashing a vicious left hook that dropped his opponent and swiftly forced the referee to end the contest.

“Anybody who takes the left hook must go down,” Whyte grinned when analysing to his masterful work.

“That was probably the best knockout of my career.”

After reaffirming belief in his ability to thrive at this level with evidence that he can hurt any fighter in the division, Whyte finds himself in a familiar position.

Due to Joshua and Fury, Whyte must, once again, bide his time. But there is now intrigue surrounding a potential meeting with Deontay Wilder, who was humbled by Fury last year, and may begrudgingly confide in Whyte with both left out in the cold for now.

Together the pair can earn a fortune, rather than grow stale waiting for the crumbs to fall from Joshua and Fury’s undisputed saga.

He may still not have what he desires most, but Whyte was rewarded for his patience.