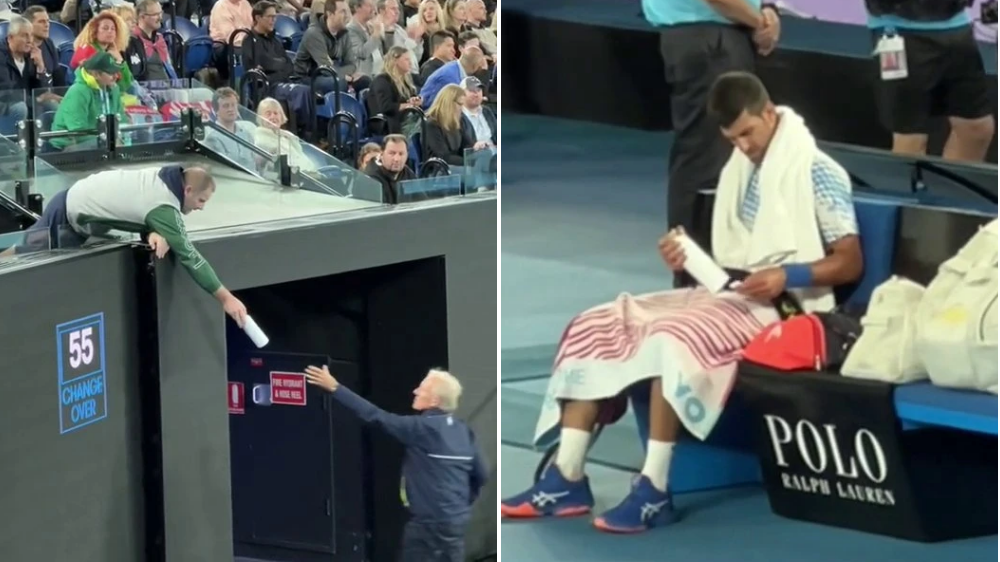 Novak Djokovic has been accused of breaking Australian Open rules over a mysterious white bottle and has slammed those doubting his injuries.

The 35-year-old Serbian is currently chasing a record-extending 10th Australian Open title and faces Russian Andrey Rublev in the quarter-finals on Wednesday following his fourth-round victory over 22nd-seed Alex de Minaur in straight-sets.

Djokovic will lift his 22nd major men’s singles title if he emerges victorious at Melbourne Park – which will see him go level with Rafael Nadal for the most in history after he moved ahead of Roger Federer’s 20 at Wimbledon last year.

The world No.5 has only dropped one set at this year’s Australian Open so far – which came in his second-round win over Frenchman Enzo Couacaud – but Djokovic has been accused of cheating during that clash after a recent clip went viral on social media of him being handed a suspicious white bottle.

The video showed a member of Djokovic’s team passing the bottle to a tournament official, who then gave it to the Serbian during a break in play. The tennis star was then spotted carefully reading a label on the bottle, leading to concerns he had broken tournament rules over being coached during a match.

It is not the first time Djokovic has been involved in controversy over a mysterious bottle after a clip also went viral at the Paris Masters in November.

It showed a member of Djokovic’s team appearing to add something to a yellow plastic container that the 21-time major winner later drank from during his semi-final clash. Djokovic’s team also tried desperately to shield their actions from fans.

‘Only my injuries are questioned. When some other players are injured, then they are the victims, but when it is me, I am faking it. It is very interesting… I don’t feel that I need to prove anything to anyone.

‘I have got the MRI, ultrasound and everything else, both from two years ago and now. Whether I will publish that in my documentary or on the social media, depends on how I feel. Maybe I will do I it, maybe I won’t.

‘I am not really interested at this point what people are thinking and saying.

‘It is fun, it is interesting to see how the narrative surrounding me continues, narrative that is different compared to other players that have been going through similar situation.

‘But I am used to it, and it just gives me extra strength and motivation. So I thank them for that.’