The 49ers confirmed the passing of Haralson in a statement to the team’s website. 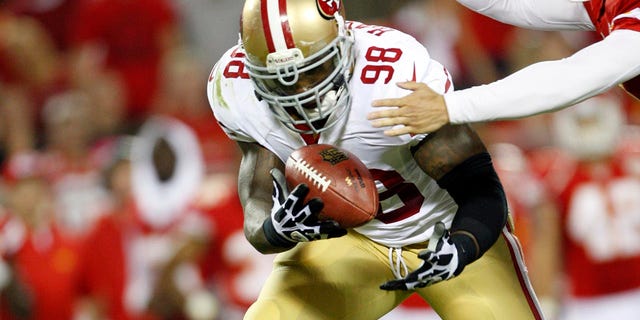 KANSAS CITY, MO – AUGUST 18: Parys Haralson #98 of the San Francisco 49ers blocks a punt during the game against the Kansas City Chiefs at Arrowhead Stadium on August 16, 2013 in Kansas City, Missouri. The 49ers defeated the Chiefs 15-13. (Photo by Michael Zagaris/San Francisco 49ers/Getty Images)

The details surrounding Haralson’s death were not immediately known.

A fifth-round pick in the 2006 draft, Haralson played seven seasons with the 49ers where he registered 295 tackles, 21.5 sacks, four fumble recoveries, three forced fumbles, and four passes defensed in 86 games.

He played two seasons with the Saints from 2013-2014 where he totaled 85 tackles, 6.5 sacks, one fumble recovery and one pass defensed.

“Playing his final two seasons of an eight-year NFL career with New Orleans, Haralson possessed an unforgettable smile, upbeat attitude and was deeply respected by teammates and the coaching staff alike for his combination of dependability, leadership, and professionalism,” the Saints website read. “The organization’s thoughts and prayers go out to the Haralson family.”

Haralson was also a standout at the University of Tennessee where he finished ranked fifth in school history with 21 sacks.

He returned to the Niners organization in 2016 where he served as director of player engagement until 2018.