ANTONIO CONTE does not get enough credit for transforming English football.

Pep Guardiola and Arsene Wenger are customarily cited as the chief game-changers of the Premier League era when it comes to tactics. 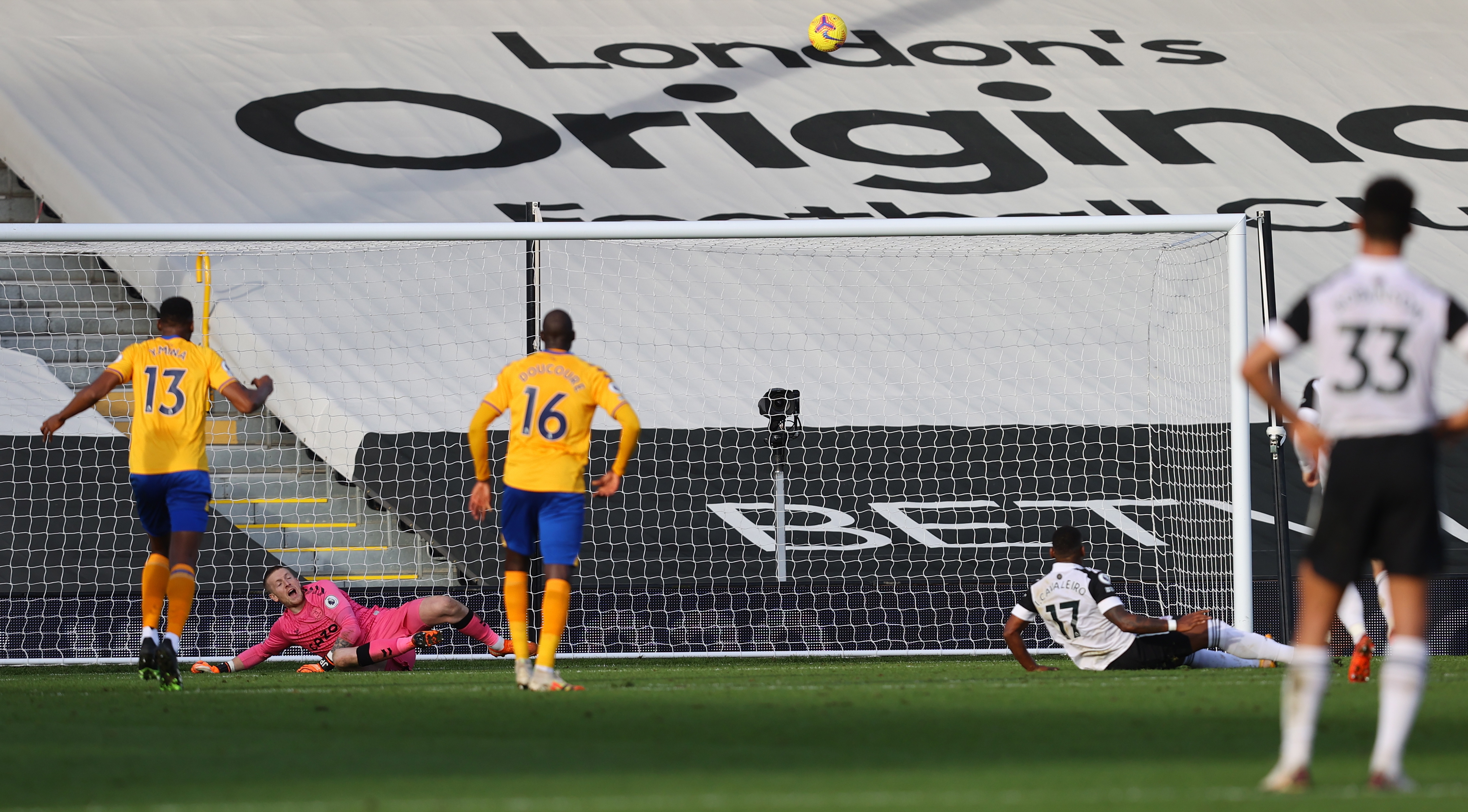 But Conte, and how he made three central defenders and wing-backs cool again while with Chelsea, is rarely lauded for his influence on how the game here is played.

On Sunday, Everton proved to be the latest team to adopt the Italian’s blueprint.

Whether enforced through injury or due to a poor run of results, Carlo Ancelotti’s side moved to three at the back and deployed Lucas Digne and Alex Iwobi as wing-backs.

It ripped Fulham apart in the first half.

Dominic Calvert-Lewin helped himself to two goals – the first coming inside 42 seconds – and Abdoulaye Doucoure made it three.

Scott Parker’s men did score through Bobby De Cordova-Reid and were much improved after the break, despite missing yet another penalty through Ivan Cavaleiro before Ruben Loftus-Cheek grabbed his first goal for the club.

But the hosts could not live with Iwobi and Digne who were reminiscent of Victor Moses and Marcos Alonso during Conte's title-winning Blues of 2016.

While the fluid movement of James Rodriguez and the returning Richarlison was also too hot to handle. 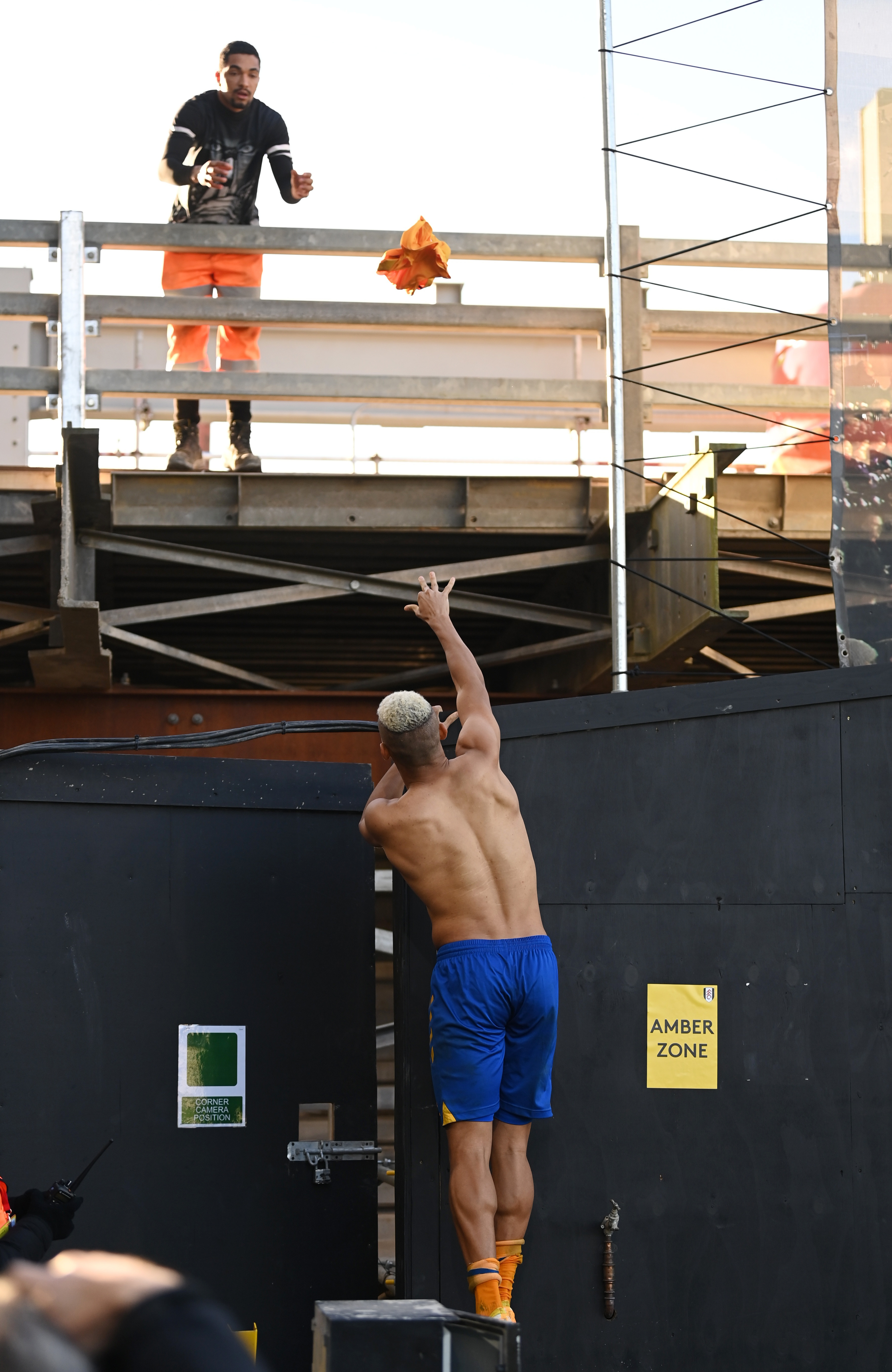 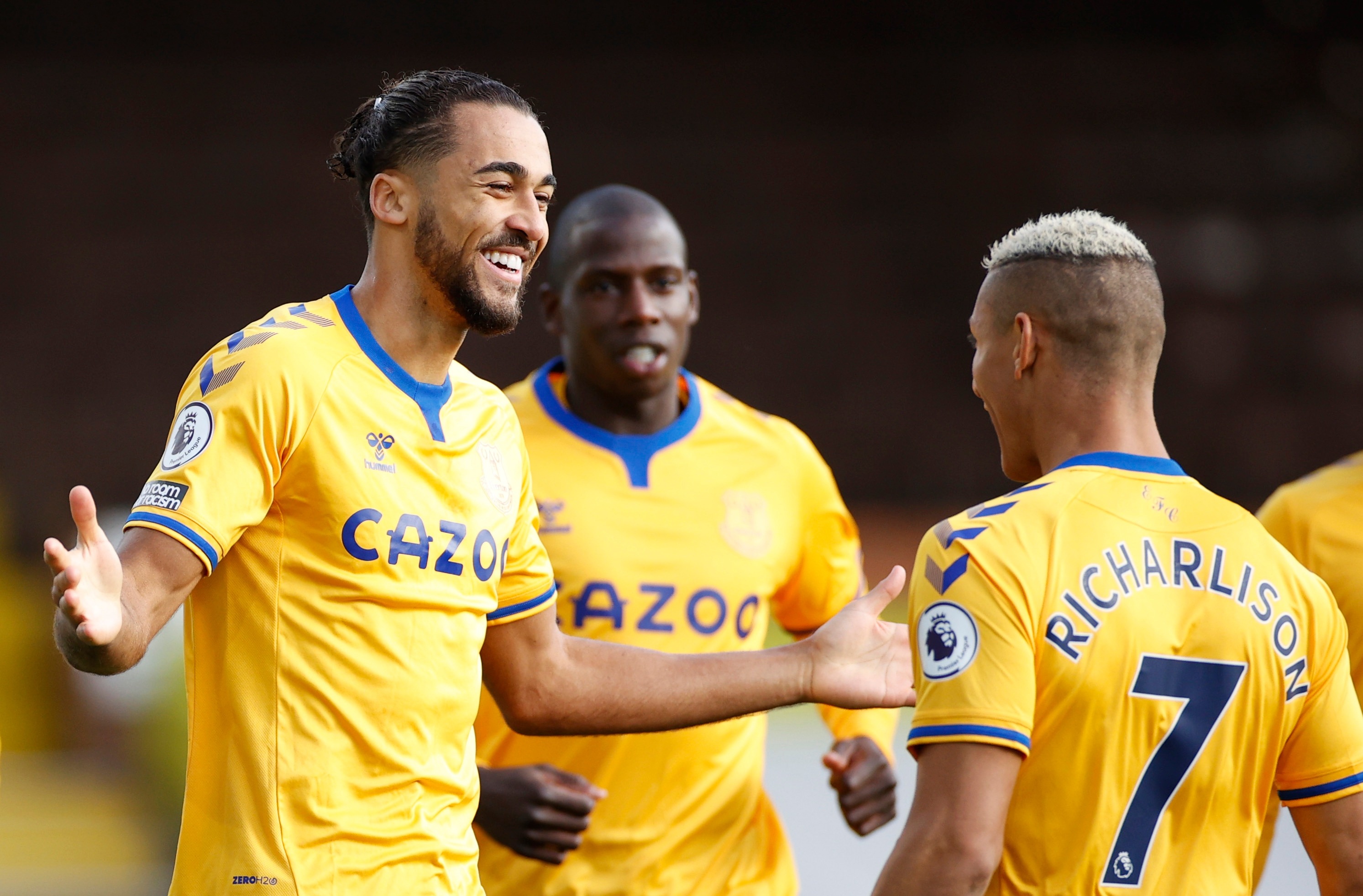 It ended three straight defeats for the Toffees, who had won their opening seven games of the season in all competitions.

And it will have had fans believing again that this can be a special season for the blue half of Merseyside, particularly given how unpredictable this campaign has been so far.

Though that will have to be tempered with how poor Fulham were at the back as once again they shot themselves in the foot by conceding early.

It was the fifth league goal they had shipped inside the first eight minutes of a match this season.

Calvert-Lewin’s strike was the fastest of them all as the England forward unwittingly turned in a deflected Richarlison cross.

Parker will have been seething as it was sparked by De Cordova-Reid sloppily losing possession.

De Cordova-Reid set about redeeming himself and his scuffed shot forced Jordan Pickford to scramble across his goal and push the ball wide.

Parker had left the out-of-form Aleksandar Mitrovic on the bench for “tactical” reasons, plus the fact he had just returned from international duty. 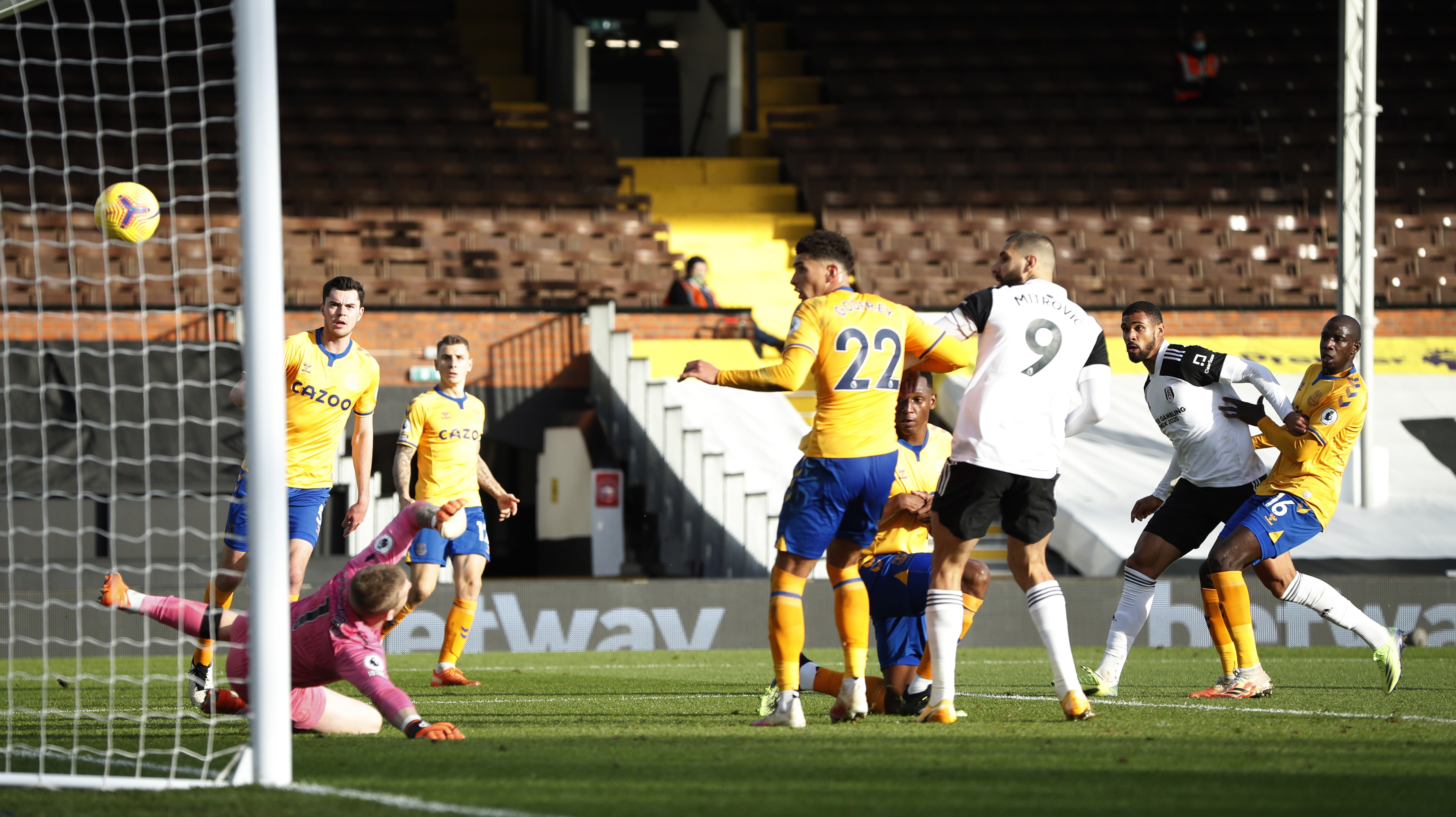 It could hardly have lifted the striker’s confidence, which was already low after his penalty miss cost Serbia a place at next year’s Euros, much to Scotland’s delight.

Yet the change looked vindicated with Cavaleiro’s movement an asset up top, opening up space for the likes of De Cordova-Reid.

It was the ex-Bristol City ace who drew the hosts level, playing a neat one-two with Tom Cairney before confidently slotting past Pickford.

Fulham’s tails were up at that point but failed to capitalise on a strong spell, with Ola Aina failing to match his West Brom wonderstrike by driving over.

Seconds later, Everton were back in front, through that man Calvert-Lewin again.

His first-time finish, which took him to ten league goals for the season, was ruthless.

But it was the build-up that really caught the eye.

Iwobi cut in from the right and drove past a few players, before the ball was worked out to fellow wing-back Digne. 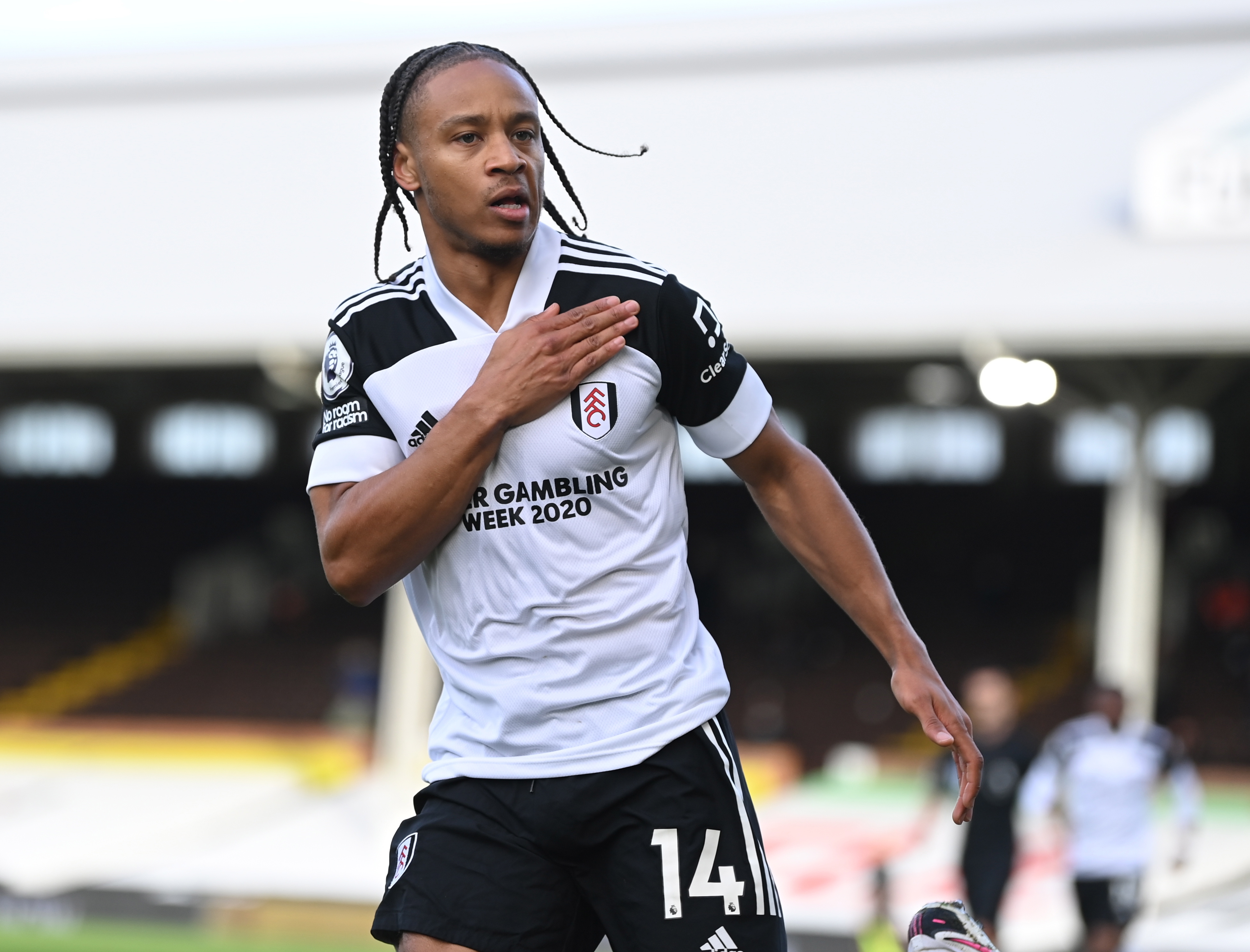 The Frenchman’s delivery has been among the best in the division since he arrived two years ago and it was spot on here again for Calvert-Lewin to finish.

Iwobi, who also seems to have a good understanding with Everton’s centre-forward, will have been delighted with his contribution.

He has been underwhelming since joining from Arsenal for £40million last year, but was outstanding in his new role here.

His confidence will have already been up having scored twice for Nigeria in the international break but the 24-year-old will now be hoping his manager sticks with this system.

That is partly because he is unlikely ever to dislodge Rodriguez or Richarlison when both are fit in the more advanced positions.

The South American duo were thrilling to watch here as they regularly swapped sides.

Rodriguez’ pass that led to the third goal was a thing of beauty, too.

For all his magic since his surprise transfer from Real Madrid, this was perhaps the most wizardlike as he fed Digne with an outside-of-the-boot pass. 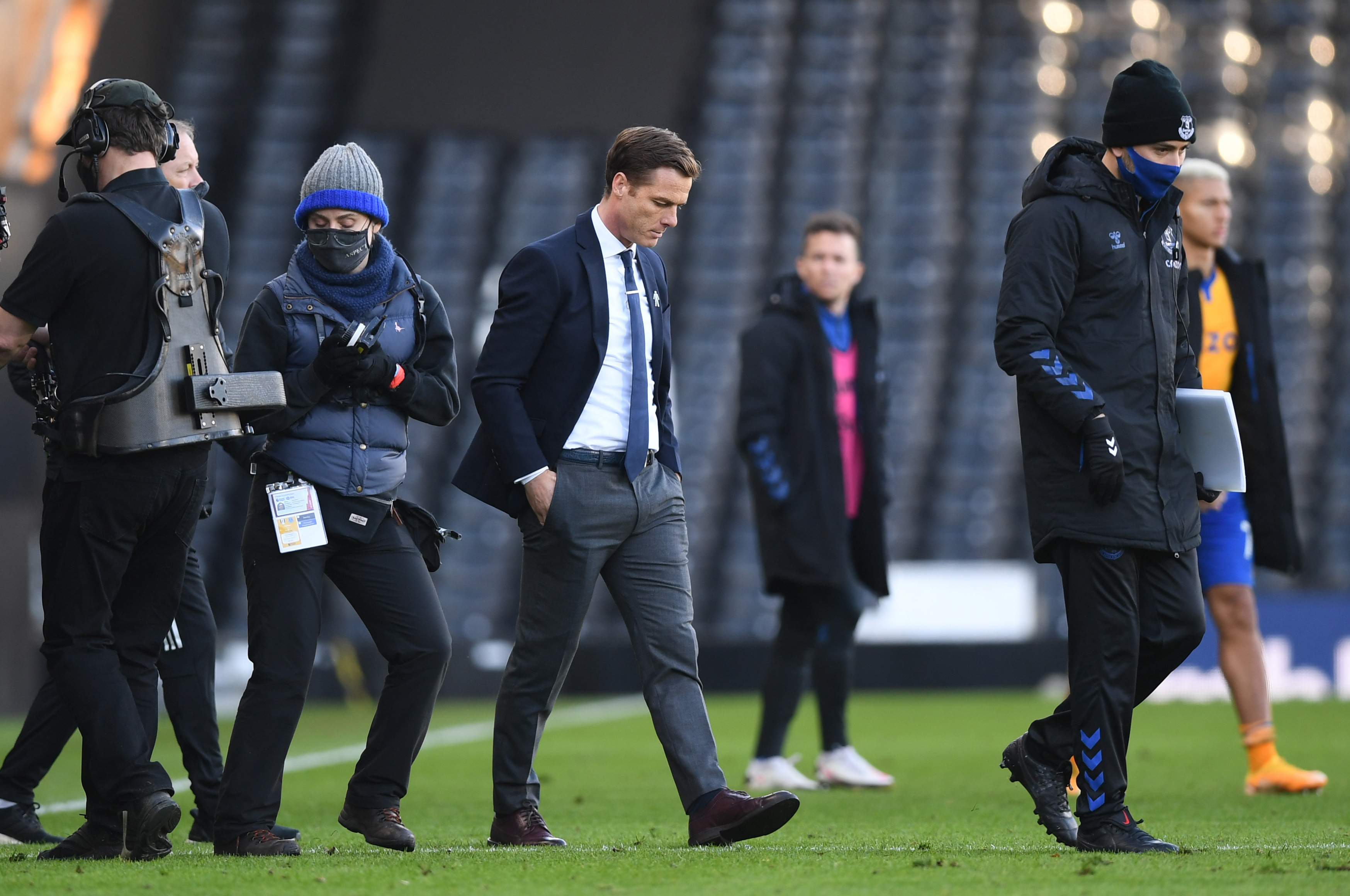 The ex-Barcelona and Paris Saint-Germain full-back then clipped a pinpoint ball to Doucoure who found the corner with his head.

Fulham looked finished as they headed into half-time.

But in part due to Everton dropping their level and Parker’s positive substitutions, the home side battled their way back into the contest.

That was despite their penalty curse continuing thanks to another laughably-bad spot-kick.

Mitrovic and Ademola Lookman had both fluffed their lines from 12 yards against Sheffield United and West Ham respectively.

So this time the responsibility fell to Cavaleiro, who never looked confident.

The ex-Wolves man opted for the Mitrovic route rather than Lookman’s panenka shame as he ballooned the ball over the bar, falling over in the process.

Fulham shook off the disappointment as a minute later, sub Loftus-Cheek – who had won the penalty when Ben Godfrey tripped him – bundled home Lookman’s cross.

It gave hope of a dramatic leveller which never came as Everton dug in for a win Conte would have been proud of.