Ichi Ban has won overall handicap honours in the Sydney to Hobart for a record-equalling third time after an international jury upheld two protests against a rival yacht for being uncontactable by radio for 90 minutes.

The Tattersall Cup wasn’t decided until the early hours of Friday morning after a marathon four-hour hearing after which Celestial was penalised 40 minutes for the mishap, just before midnight on December 27, when a personal locator beacon on one of the crew members was accidentally activated.

It prompted the Australian Maritime Safety Authority Search and Rescue to notify the race committee, which couldn’t immediately contact the crew, and even triggered discussions over whether to launch a search and rescue plane from Essendon Airport.

The race committee also asked for Ichi Ban’s help to ensure all sailors were safe on Celestial.

Ichi Ban, the closest boat in the fleet to Celestial at the time of the incident, about seven to 10 nautical miles adrift, also couldn’t contact her rival through repeated VHF calls.

It prompted the race committee to ask Ichi Ban to release a handheld white flare to attract the attention of Celestial’s crew, which received no response, and then shortly later a red parachute flare. 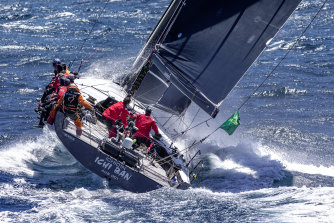 Ichi Ban was declared the winner of the Tattersall Cup after a protest.Credit:Rolex/Andrea Francolini

About 10 minutes later Celestial contacted Ichi Ban using the navigator’s handheld radio on deck. It confirmed all crew were safe and the beacon activation was accidental.

The race committee said there were 12 other inadvertent activations of the safety beacon from the fleet during the race, but the maximum response time was 25 minutes. Celestial was uncontactable for more than an hour-and-a-half.

The six-person jury opted not to disqualify Celestial from the race, but docked her 40 minutes and determined it was possible Ichi Ban’s “finishing position in the race was made significantly worse through no fault of her own by giving help in compliance with RRS 1.1 to someone else than herself or her crew”.

‘We’d always prefer to win on the water. Sailors don’t like going in to the [jury] room.’

It’s the third time Matt Allen’s Ichi Ban had lifted the Tattersall Cup, equalling the record of Freya and Love And War.

“We’d always prefer to win on the water,” Allen told reporters in Hobart on Friday. “Sailors don’t like going in to the [jury] room. I’ve been into the room probably no more than six times in my lifetime. We never want to.

“But obviously the race committee protested. Sailing has many rules to it, and they are important to abide by, especially the ones related to safety.”

Dozens of boats retired during the race due to the treacherous southerly winds with Black Jack claiming line honours in the slowest time since Nicorette won in 2004.