Like many indigenous Australians, Patty Mills has a complex relationship with our national flag. His ancestors have looked to the southern cross for 50,000 years but the accompanying Union Jack represents something far more sinister for our First Nations people.

Yet Mills has resolved to make the honour of carrying the flag for the Australian Olympic team an act of unity and togetherness. They are not hollow words for the Boomers star, because he feels a burden of history far heavier than any flagstick he will be handed before he marches with swimmer Cate Campbell at the head of the athlete group.

Mills and Campbell spoke in Tokyo on Thursday to reflect on their impending duties. It only reaffirmed the decision of chef de mission Ian Chesterman to select them for the role. Both oozed sincerity and passion, looking and sounding every bit the spiritual leaders of the current Olympic cohort.

Mills spoke of Cathy Freeman, one ofhis enduring inspirations, and the flood of colour and indigenous art that has graced the Australian section of the athletes’ village. Instead of a team-issue green and gold face mask, he wore one sporting striking Aboriginal designs.

“I think the first thing that needs to be said is that entering the village a couple of days ago, just being able to see how much indigenous artwork is in our Australian headquarters, having flags at the bottom of the stairs, it gave me thrills to see how much it was incorporated throughout our entire team,” Mills said.

“It’s something that’s very unifying, as the Olympic Games is. So for us to walk in and feel that impact, I can only assume the greater Australian team had that same feeling as well.” 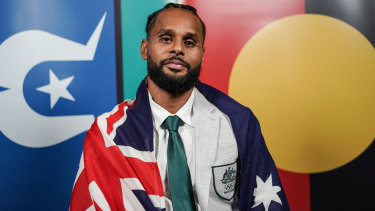 The discussion about flag and anthem among Indigenous athletes has intensified over recent years. A number of leading rugby league players have opted not to sing the anthem, saying it has little meaning for them, while the relevance of the flag design is an issue that rises and subsides periodically.

Already in Tokyo the Matildas have posed proudly behind an indigenous flag, while for Mills, Freeman remains the cultural benchmark after she carried both in her victory lap in Sydney 21 years ago.

“For me, it’s Cathy and seeing how she represented herself, how she represented her people and what she was able to do throughout her career,” Mills said. “As a proud Indigenous man I have a lot of things that are symbolic and have a lot of meaning to me. At the end of the day, it’s how it makes me feel as a competitior, and where I get my motivation from to achieve certain things.

“And the last thing is identity, it’s being able to showcase who you are throughout the world. For me, it’s one of those things that makes you proud of who you are. To be able to do it in a unifying way with the greater Australian team, I think this is what it’s all about. We’ve definitely come a long way. It’s special.”

Mills was pressed on whether the Boomers may take a knee, or whether they would make any symbolic gestures within the Rule 50 guidelines of the Games. He said it had yet to be discussed and all focus had been on getting their tournament started with a win against the impressive Nigerians.

“Those conversations haven’t been had, mate,” Mills said. “It’s one of those things, as a team sport there are always things you try to find to come together and bond. If that helps you compete, that’s what should be done.”

Mills will be the first Indigenous Australian to carry the flag while Campbell is the first female swimmer to be given the honour. She will not be required for a relay heat the following night, so can rest and recover in time for the first morning of finals.

Both are able to take an invited guest from the wider Australian group and Campbell has selected her long-time coach Simon Cusack, who has guided both her and sister Bronte to world and Olympic gold medals.

Around 50 Australia athletes are set to march on Friday night, although Chesterman said that could yet swell. There will be media and officials in the crowd but no spectators. It will make for a surreal moment for flag bearers and athletes of every nation but such is life at the COVID Games.