After 11 world championship titles, a decade at the top of her sport, and silver and bronze medals in London and Rio de Janeiro, Jessica Fox has spent a long time saying Olympic gold is not a gap in her resume. For the past two days, after her second bronze in the K1 slalom , she had to keep telling herself: It’s not all about gold.

But by Thursday afternoon, maybe, it was. 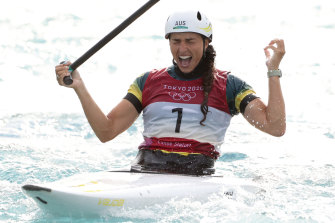 Fox’s win in the inaugural Olympic C1 slalom for women sets her name in history. There is only one first time, and she felt like this achievement made up for the previous disappointments.

First, she had to process the most recent, her bronze medal in Tuesday’s K1 event. She slept poorly on Tuesday night, “when I did go through my [K1] race a million times, especially that last upstream gate when I incurred the penalty,” she said. “I’d felt ready and good before the K1 final and it just slipped away. I was absolutely gutted not to do the run I’d wanted.”

On Wednesday night she slept better, and by Thursday afternoon she said she “felt very nervous but that also meant I was ready”.

As Fox waited, Britain’s Mallory Franklin, paddling early in the field of 10, had posted a fast time of 106.68 seconds. Allowing for a two-second penalty, Franklin had got through the course faster than Fox had in her three qualifying times.

After Franklin, Fox’s other rivals gradually fell away. Andrea Herzog of Germany, Brazil’s Ana Satila and finally Tereza Fiserova of the Czech Republic all fell short of the mark set by Franklin.

Around this time, Fox, who said she had felt calm as she waited to start, had to go behind a tent and throw up. “Whatever I’d had between the runs didn’t sit well. But that was my body telling me I was getting ready for something big. It’s always about reframing those things and turning them into a positive.”

She saw her mother and coach, Myriam, and said, “I’ve thrown up but it’s fine.” They fist-bumped and Fox was ready.

It was all of Australia who felt like throwing up for the next 105.4 seconds. Fox got through the fiendish sequence of tight turns through gates four, five and six, set a strong rhythm through the middle of the course, and then faced a speedy slide into gate 15, which had undone Franklin. Fox said that this was the gate that worried her most. She made it, we breathed again, and, as Franklin observed from the competitors’ area, the gold medal was Fox’s. 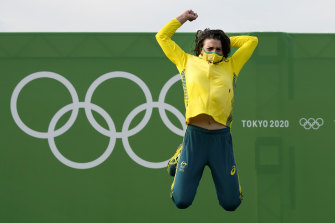 Fox jumps for joy on the podium.Credit:AP

“Relief, pure joy, all the emotions. It was such a massive 48 hours after the kayak event,” she said of her emotions. “The Olympics are different. A lot of emotion involved, taxing mentally, emotionally and physically.”

Her other medals, she has said, are “in a drawer somewhere” at home in Penrith. This one might get a special place.

“The C1 is extremely special at these Games. I can’t believe I’ve become the first Olympic champion and I’m so proud of all the women who have raced in it.”

Starting with her mother, an Olympic bronze medallist herself. When asked if this medal belonged to a long line of female paddlers, Myriam Jerusalmi exclaimed “Yes!”