FOR a man who bears a passing resemblance to Count Dracula there is no doubt that Unai Emery comes alive on Europa League nights.

The Arsenal boss masterminded yet another return from the dead as his team took a telling stride towards this month’s final in Baku. 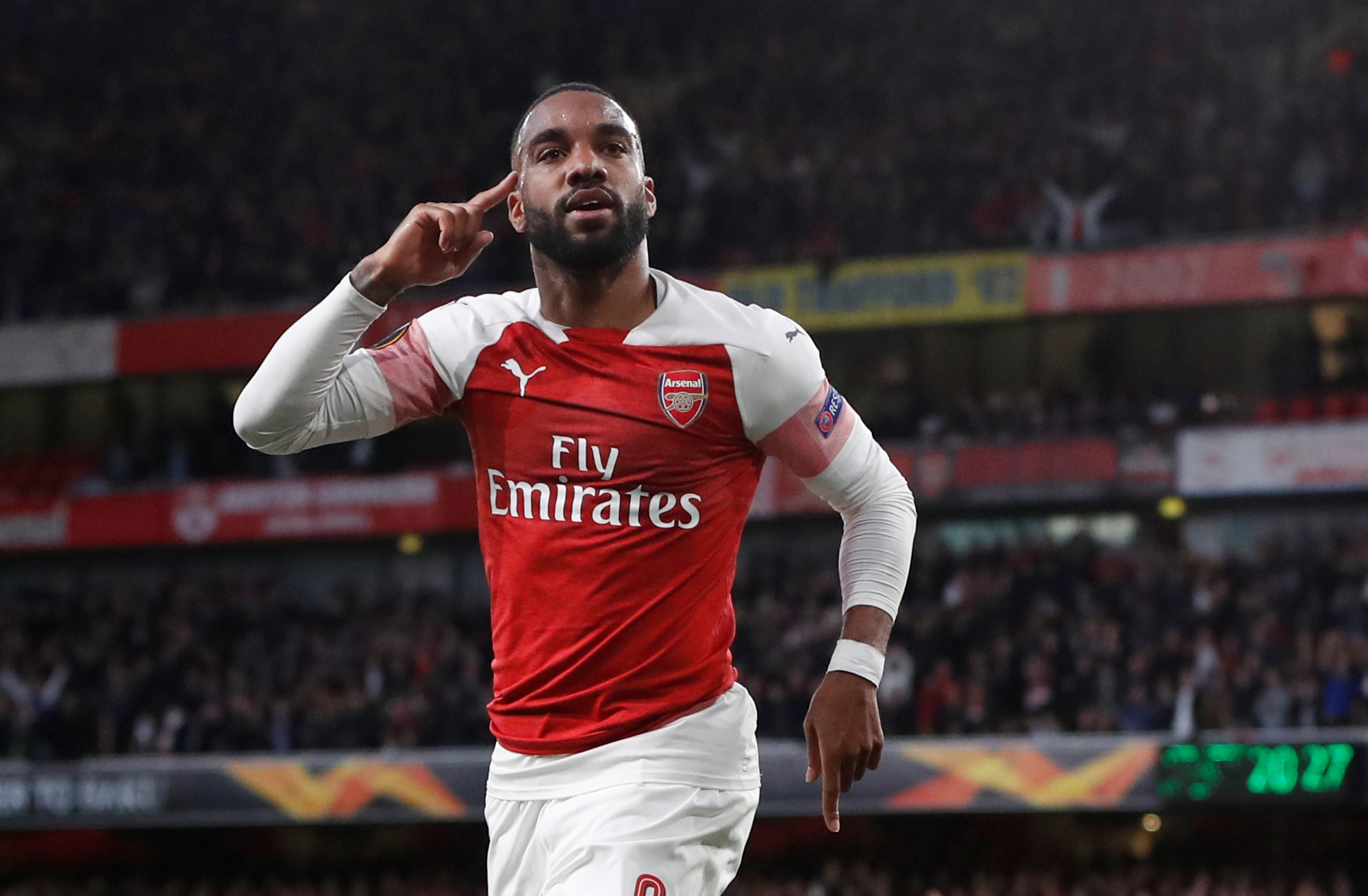 No other coach in history can match Emery’s proud record of winning the Europa League three seasons in a row during his time in charge of Seville.

And now he is eyeing up a fourth success in the competition which many of his top managerial rivals turn their noses up at.

Two goals from Alexandre Lacazette and a late third from Pierre-Emerick Aubameyang leave the Gunners firmly in the semi-final driving seat ahead of next week’s return game at the Mestalla.

And with his team doing their level best to blow their hopes of a top four Premier League finish, Emery knows he will probably have to win the Europa League again if he is to achieve his target of Champions League qualification.

Yet victory in Valencia is by no means guaranteed after this nervy Emirates evening.

His team continue to fly by the seat of their pants and appear to defend more by luck than judgement.

But they somehow keep getting away with it against continental opposition and will now believe that they can finish this job off next Thursday.

They will travel to Spain bolstered by the knowledge that Lacazette and Aubameyang are capable of tearing any team apart, even if Mesut Ozil continues to frustrate.

Ozil had given Emery a ringing endorsement during a pre-match interview in which he also made it clear that he has no intention of allowing himself to be forced out of the Emirates this summer.

But the manager remains unconvinced about the value of a player who makes himself unavailable on far too many occasions. 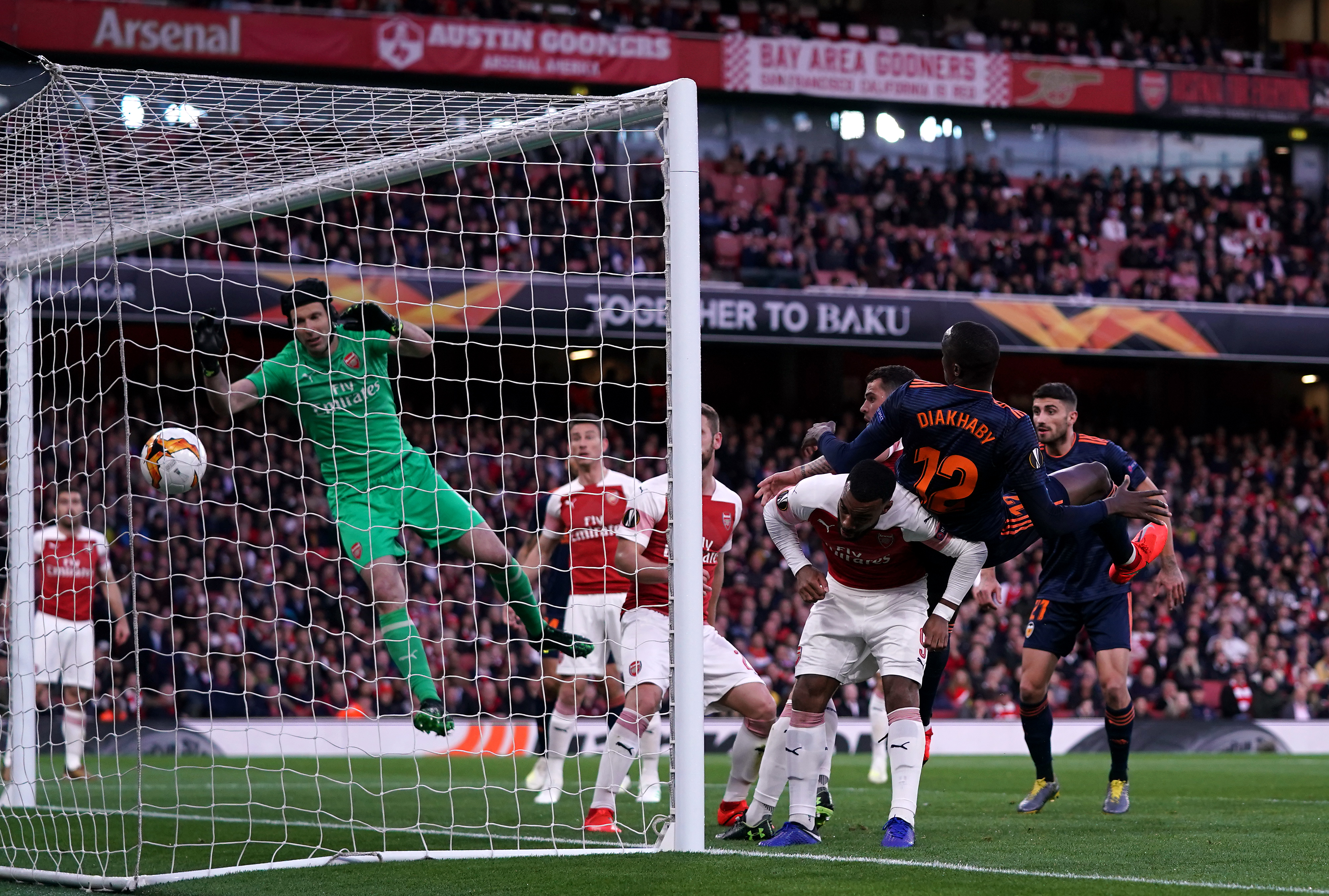 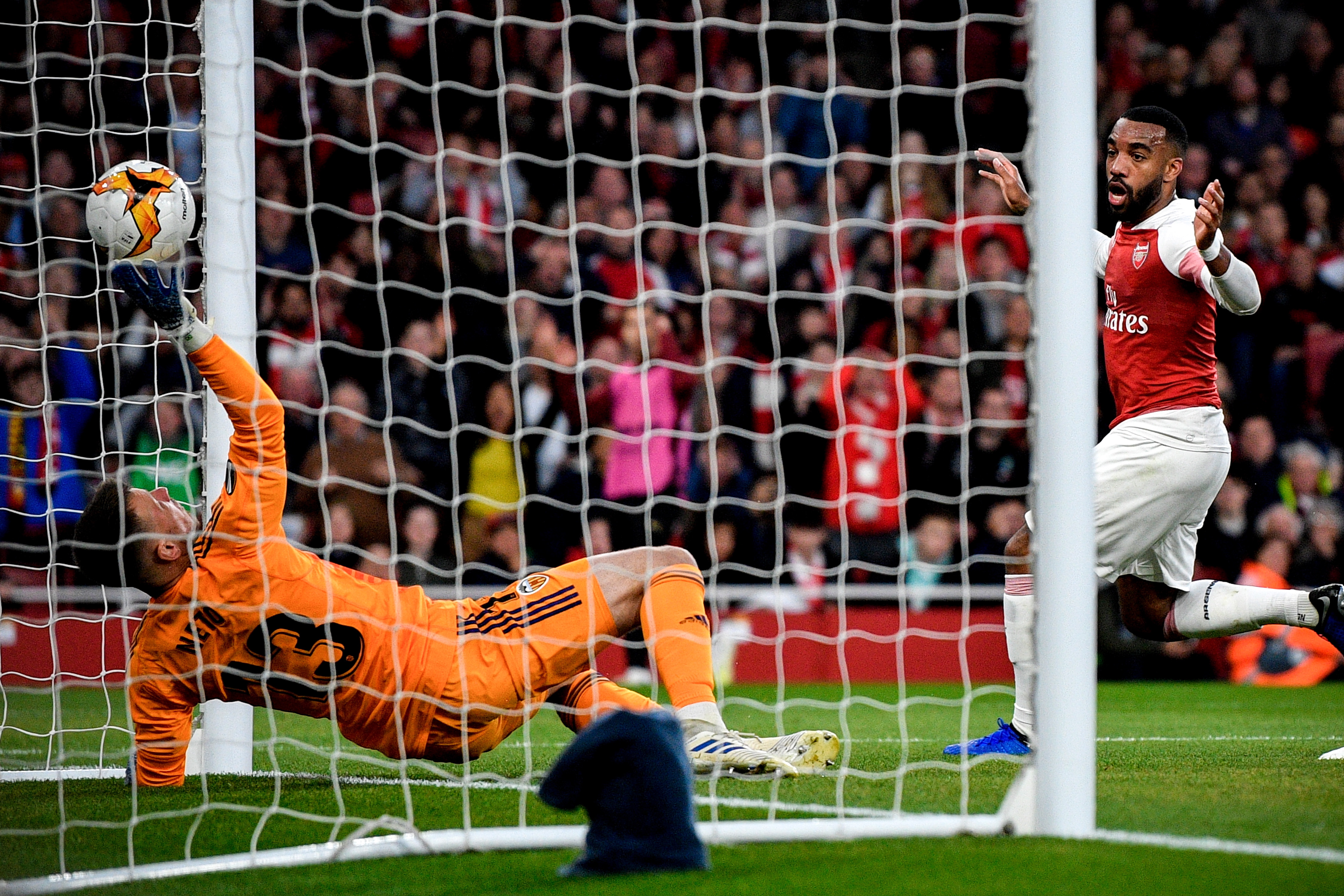 Ozil had managed yet another miraculous recovery from the foot injury which ruled him out of Sunday’s awkward trip to Leicester.

Yet on a night when Arsenal desperately needed a big performance from their most creative player, Ozil was once again a peripheral figure.

And with the tackles flying in from both teams, this was never going to be a night for the faint-hearted.

Valencia coach Marcelino had clearly identified Arsenal’s weakness at set-pieces and prepared his team to take advantage of every free-kick and corner.

They should have been ahead in the eighth minute when Daniel Parejo’s clever free-kick was volleyed across goal by Rodrigo but Ezequiel Garay shot over from a yard out.

Yet Arsenal did not learn their lesson and conceded a crucial away goal three minutes when Rodrigo headed a deep corner into the danger zone for the giant Mouctar Diakhaby to force home after outjumping Granit Xhaka. 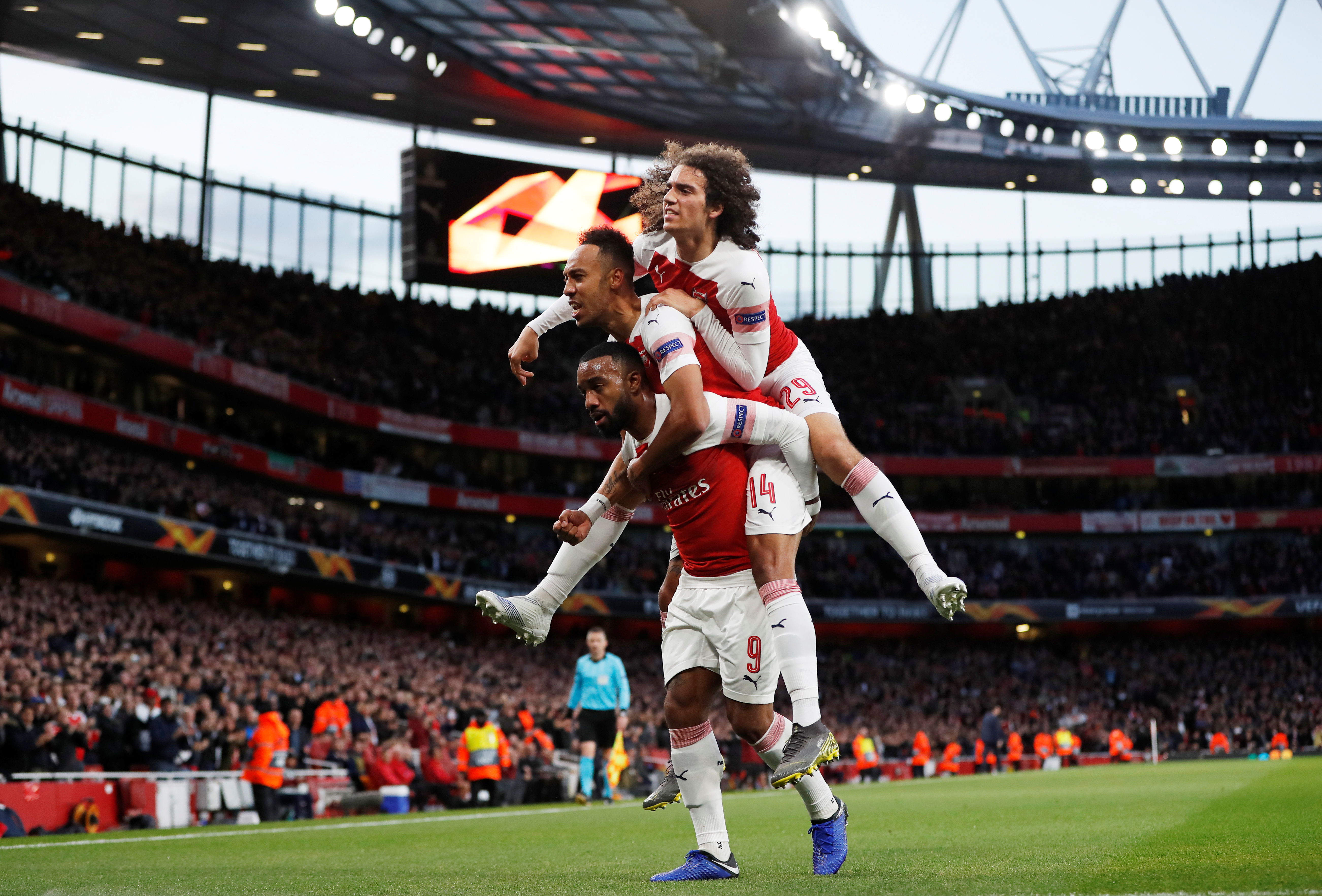 It was the worst possible start for Emery’s team after their recent defensive meltdowns in the Premier League.

They could have fallen further behind on the quarter-hour when Parejo’s shot was parried by Petr Cech before Goncalo Guedes volleyed over after intercepting Ainsley Maitland-Niles’ disastrous attempt to head the ball to his keeper.

But just as the Emirates was steeling itself for another night of embarrassment, Arsenal suddenly found another gear to strike on the counter-attack.

Lacazette’s pass up from the halfway line gave Pierre-Emerick Aubameyang the opportunity to stretch Valencia’s defence and tie Facundo Roncaglia in knots.

Keeper Neto moved himself into position to block the shot but was left wrong-footed by Aubameyang’s selfless pass which Lacazette swept in from the edge of the area.

It was a peach of a goal from two strikers who work so well together that you wonder why Emery doesn’t play them both in every match.

Lacazette has been in a particularly rich vein of form since the turn of the year and took his season’s tally to 17 when he nodded in from Xhaka’s 26th minute cross.

Neto threw himself across goal to push the header against the inside of his far post but the ball had clearly crossed the line before the Brazilian keeper could claw the ball back into play.

Suddenly Arsenal were a team transformed as they sensed a growing desperation about the team currently sixth in La Liga.

Another Xhaka cross picked out Aubameyang for a full-blooded volley which flew inches over on the bounce.

But it was Lacazette who had the best chance to give his team some breathing space, spurning two glorious hat-trick opportunities right in front of goal.

Those misses made for an uncomfortable final few minutes for Emery as Cech was forced into a vital block to keep out Kevin Gameiro.

The full value of that save was only truly appreciated in the 90th minute when Aubameyang volleyed in Sead Kolasinac’s deep cross after another Lacazette shot had been parried by Neto. 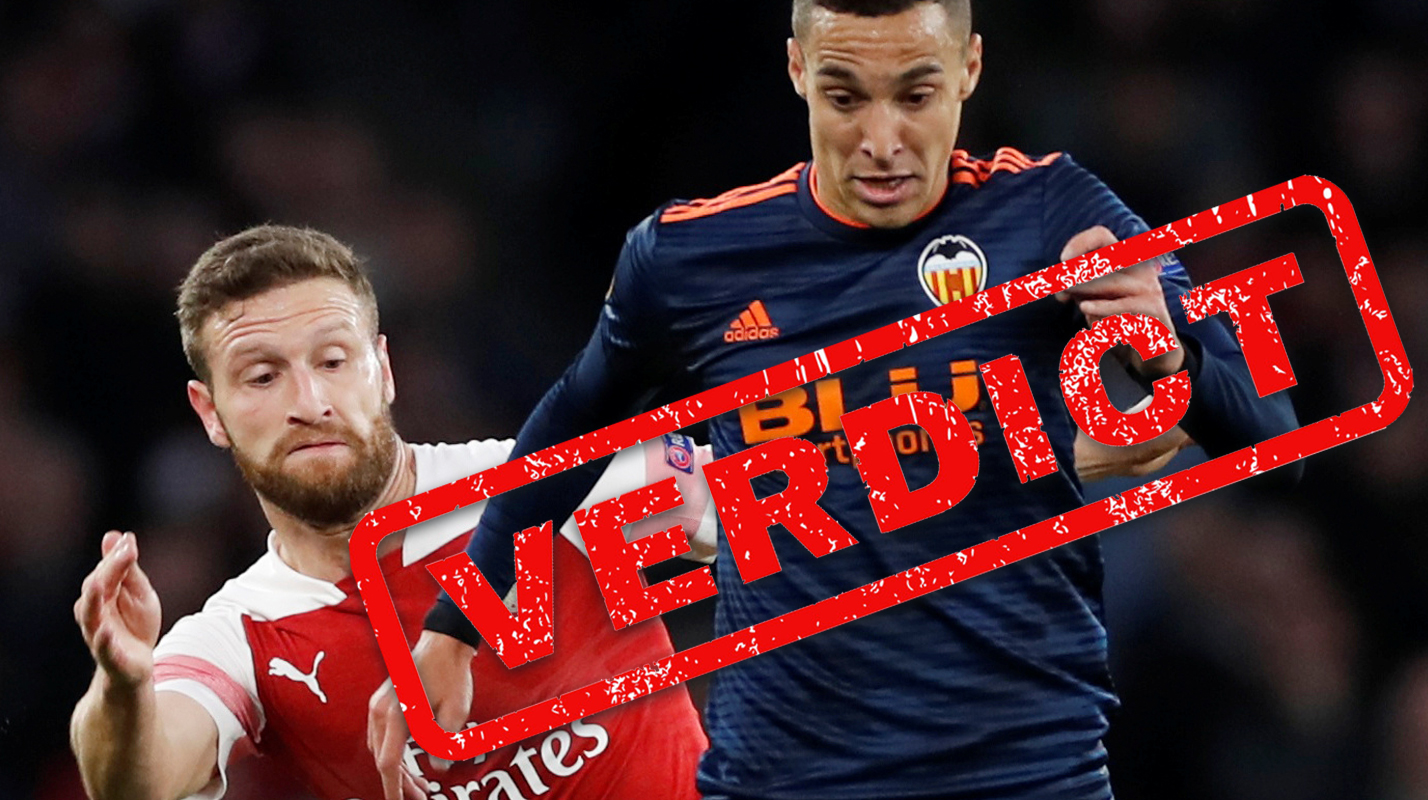 Emery’s £115million strike partnership now has 42 goals between them this season.

A couple more in Valencia next week and he can start digging out the silver polish again.