Major League Baseball will look into a tweet sent by Rob Drake, an umpire, that mentioned the possible impeachment of President Donald Trump, firearms and the spectre of an American civil war, a spokesman said.

Drake tweeted Tuesday (US time), "I will be buying an AR-15 tomorrow, because if you impeach MY PRESIDENT this way, YOU WILL HAVE ANOTHER CIVAL WAR!!! #MAGA2020." 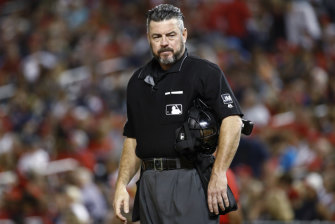 The tweet, which was first reported by ESPN, has since been deleted and the account was deactivated.

USA Today reported that Drake's previous tweets included a reply repeating the debunked conspiracy theory that President Barack Obama was not born in the United States.

Another tweet included an expletive to call Hillary Clinton a "liar" about a lethal attack on the US diplomatic compound in Benghazi, Libya, in 2012.

The umpires' union said: "Rob is a passionate individual and an outstanding umpire. He chose the wrong way to convey his opinion about our great country."

A Democratic-led impeachment investigation in the House of Representatives into the actions of Trump began earlier this month.

Drake, an Arizona resident, went on bereavement leave during the 2016 season when his wife died suddenly.