JADON SANCHO was flooded with messages begging him to join Manchester United during an Instagram live.

The Borussia Dortmund star was chatting to a friend when posts urging him to leave the club started flooding in – forcing him to cut the clip short. 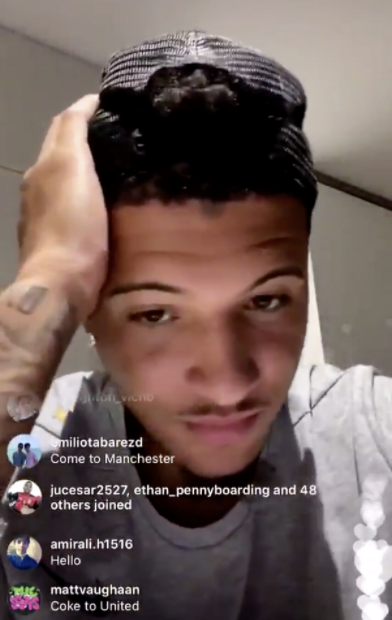 Ole Gunnar Solskjaer has made England winger Sancho his No 1 target this summer.

But he will need to fork out around £108million for the 20-year-old Bundesliga star.

United owner Joel Glazer was reportedly "preventing" the club from paying that much for one player, particularly during the financial downturn that has come about as a result of coronavirus.

While other reports claimed United had now "given up" on the move.

That was said to be owing to fears his rumoured £300,000-a-week wages would shatter the club's pay structure.

And it seemed that Sancho was in no mood to entertain such thoughts during his live video.

Despite nearly 35,000 people tuning in to see him, Sancho cut the clip early as "come to United" messages filled the screen.

No wonder, then, that club chief Michael Zorc has said he is going nowhere.

He said: "We plan with Sancho. He'll play for us next season.

"The decision is final. I think that answers all of the questions."

If Zorc's words come true then United will be forced to look elsewhere.

The Old Trafford club are said to be "seriously" considering a move for Bournemouth's David Brooks as one option.