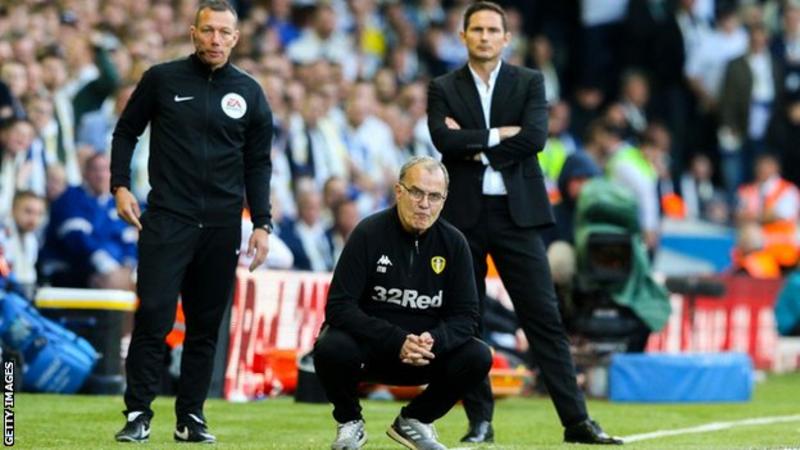 Leeds boss Marcelo Bielsa will “listen to proposals” for him to stay at the club after a “painful” play-off semi-final defeat by Derby.

The Argentine’s side lost 4-2 in the second leg at Elland Road, a 4-3 defeat on aggregate.

Following the loss, Bielsa said: “If the club offers me the possibility to carry on I will listen to this proposal.

“It’s a painful situation and we’re all disappointed,” he added.

Leeds took the lead on an eventful night, which saw both sides reduced to 10 men.

Derby equalised, before taking the lead on the night after half-time and in the tie with a penalty just before the hour.

Leeds brought the aggregate scores level again before substitute Jack Marriott became the hero for Frank Lampard’s side with a composed finish in the 85th minute to seal a trip to Wembley to face Aston Villa.

For Leeds, who finished third in the table, defeat means their spell outside the top flight will stretch to a 16th year.

But Bielsa had no complaints about his players throughout the campaign, saying: “What they have offered to the club during this season will be valued with time.

“The fact that we couldn’t reach goals that were so close leaves a feeling of disappointment, but you can have another perspective about it.”

It has been an eventful first season managing in England for Bielsa, as the Whites spent most of the campaign in the top two before a late-season slump meant they had to settle for a place in the play-offs.

Before the two-legged tie with Derby, he had said he would not speculate on his future: “I would never say that if we stayed in the Championship I won’t stay here, otherwise you say the importance of this club is linked to the division in which it plays.”

Bielsa, who signed an initial two-year deal when he joined Leeds last summer, revealed earlier in May that he personally paid Leeds’ £200,000 fine for spying on Championship opponents.

The EFL punished Leeds in February after a member of United’s staff was seen outside Derby’s training ground.

The former Argentina and Chile manager, 63, subsequently admitted he had sent someone to watch training sessions of every team they had played this season.

Then, in their league match against Villa in April, Leeds allowed their opponents to walk in an equaliser unopposed after the home side scored while a Villa player was down injured.

Bielsa also accepted that Leeds striker Patrick Bamford was correctly suspended for “successfully deceiving a match official” in the melee that followed the controversial goal, with Villa’s Anwar El Ghazi later having his red card for violent conduct rescinded.