Phil Mickelson changed the golf game Sunday, winning the PGA Championship at 50 years old, and he is attributing his place in history to a health-conscious lifestyle of deep meditation and proper nutrition.

The three-time winner of The Masters said he found Zen: “Just the ability to kind of quiet my mind and get rid of all the exterior noise. I don’t want to get all spiritual, but that’s kind of been the biggest thing for me.”

Nicknamed “Lefty,” eating right also played a part in his success. “I’ve got to eat a lot less and I’ve got to eat better. I just can’t eat as much and I have to let my body recover,” he said. “But it’s also been a blessing for me because I feel better and I don’t have inflammation and I wake up feeling good. It’s been a sacrifice worth making.” 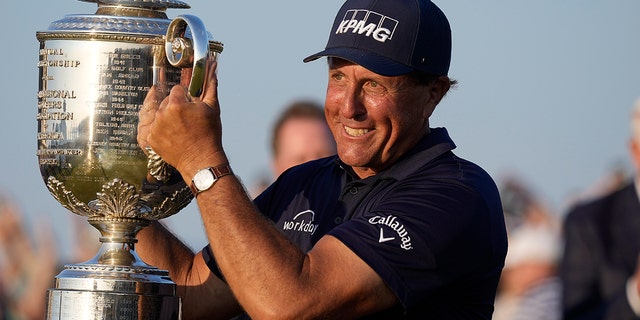 The records Mickelson shattered Sunday were numerous. Julius Boros for 53 years held the distinction of golf’s oldest major champion. He was 48 when he won the 1968 PGA Championship.

Mickelson became the first player in PGA Tour history to win tournaments 30 years apart. The first of his 45 titles was in 1991, when he was still a junior at Arizona State.

Mickelson joined Tiger Woods — who sent a tweet of congratulations — among the 10 players who’ve won majors in three decades.

“There’s no reason why golf can’t be the game for a lifetime if you take care of your body and do it the right way,” Mickelson said.

Mickelson — happy at home and injury-free — merely stretched the limits of what’s possible after a half-century on Earth.

“There’s no reason why I or anybody else can’t do it at a later age. It just takes a little more work,” Mickelson said.

Was Sunday the dénouement for this veteran, sentimental favorite?