In a high-quality final, Clayton fired six maximum 180s, averaged more 100 and hit 55 per cent of his darts at a double to claim the biggest title of his career and with it the first prize of £250,000.

The Ferret had taken the last spot in this year’s competition when he beat Mervyn King in January’s Masters final at the same venue and he won the final match of the league phase against Dimitri Van den Bergh to pinch the fourth and final place in Friday’s finale.

After beating Michael van Gerwen in the semi-final – ending the Dutchman’s hopes of a record-equalling sixth Premier League crowd – he beat maverick Portuguese thrower De Sousa 11-5 to add the Premier League to the World Cup, the Masters and two Pro Tour titles since November.

Back to work for fabulous Ferret

“It’s absolutely phenomenal, thank you to everyone who believes in me, it means a lot,” said 46-year-old Clayton who still works as a plasterer for Carmarthenshire Council.

“I’ll still be back in work on Monday but seriously it’s absolutely massive. I love the game, I’m a lazy practiser but when I come up on here I try my very best.

“This means the absolute world to me, Wales is on the map, my little village is on the map. I have a few thank yous to all my sponsors who believe in me, my family, my kids, it’s awesome.

“But most of all to the NHS who are willing to risk their health to save ours so thank you very very much, brilliant.”

After 17 nights of action, 12 played behind closed doors at the Marshall Arena, almost 1,000 packed into the venue for a thrilling night that saw Clayton beat five-time champion Van Gerwen in the semi-final. De Sousa then beat last year’s runner-up Nathan Aspinall to reach the final.

Having lost the opening leg – just as he did in his semi-final against MVG – Clayton responded with a three-figure finish and he was millimietres away from another as he found the double seven instead of double 16 and a 104 check-out.

But the Welshman had his break when De Sousa bust his score of 16 by straying into double 16 and a fired-up Ferret pinned double nine and followed up with a hold of throw for a 3-1 lead. 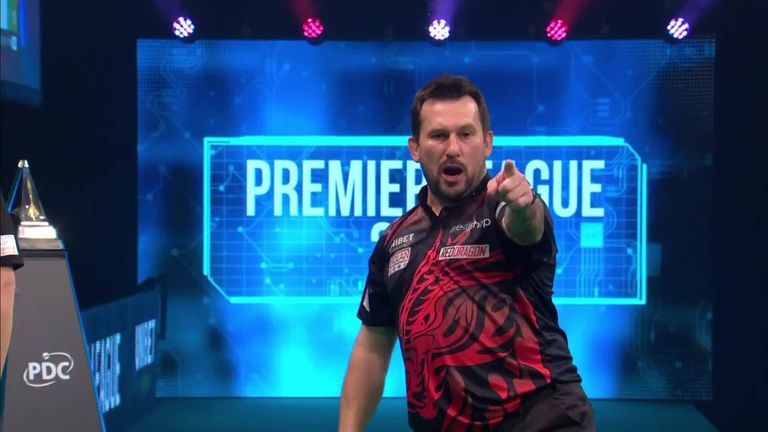 The pair split the next two legs as Clayton maintained his narrow advantage and De Sousa – having fired in a tournament record of 89 maximum 180s to reach the final, struggled to find his range on the treble 20.

Clayton was forging further clear and when he picked off a brilliant 13-dart leg against the throw he led 5-2 and was almost halfway to the finish line.

De Sousa claimed a third leg of the contest to stay in touch and break back but the Welshman was undeterred, another 13-dart break of throw kept him in the ascendency.

With Clayton poised on 102 after nine darts, The Special One produced a brilliant 100 finish to ensure a fourth successive break of throw and stand within two of the Ferret.

The interval did little to change the flow, as Clayton punished four missed darts from De Sousa for a hold of throw. A clinical 98 check-out keeping his finishing percentage close to 60 per cent only for the Portuguese to hit straight back again.

A remarkable seventh consecutive break of throw followed as Clayton moved within three of the finish line and kept pace with De Sousa who began to find his maximum range but the Ferret brushed off the threat.

A first hold of throw since the sixth leg of the contest took him four legs clear for the first time and when he pinned double 16 he was throwing for the title with a 10-5 advantage.

Clayton missed a dart at double 16 to win in style with a 112 outshot, but when De Sousa couldn’t pin the bullseye for a 127 of his own, Clayton was left with three darts for the title and he needed just two to succeed Glen Durrant.

Darts is back on your Sky Sports screens in July, with nine days of coverage from the iconic Winter Gardens and the World Matchplay – the action gets underway on Saturday July 17