The new English Premier League season begins Saturday and American soccer fans can once again indulge in early-morning kickoffs and day-drinking with Rebecca Lowe, Arlo White and the rest of the NBC crew on their television sets.

Teams had just 48 days off between the end of the 2019-20 season to the start if this new league campaign. With the continental Champions League and Europa League tournaments finishing in August, it's felt like the sport never really stopped.

So, here we go again.

Defending champion Liverpool will likely face a stiff title challenge from Pep Guardiola's Manchester City. The Reds broke their three-decade title drought last season, taking a huge weight off the club's shoulders. Man City, however, is hungry after a disappointing exit in the Champions League.

Jurgen Klopp's Liverpool has its core group virtually intactand is looking  to add Bayern Munich's Thiago Alcantara to the squad before the Oct. 5 transfer deadline. If completed, the Spaniard's arrival could add a creative spark to the Reds' high-energy midfield.

Man City once again reached into its checkbook to sign Spanish winger Ferran Torres and defender Nathan Ake, countering the departures of Leroy Sane and David Silva. Stacked with talent, City will look to Guardiola to see if he can mastermind another title-winning campaign and thwart Liverpool's chances at a repeat.

Expect this battle to go to the end of the season. 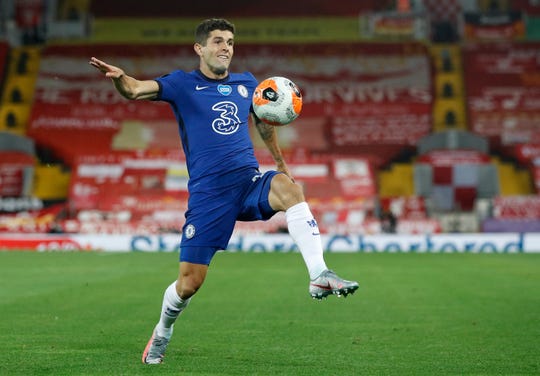 While not completely out of the title race, the Premier League's other marquee teams are expected to battle for the top four. The best of the bunch may be Chelsea, which added multiple high-profile signings to its young, promising squad. The Blues added Kai Havertz, Thiago Silva Timo Werner and Hakim Ziyech to their ranks and, along with their American star Christian Pulisic, will try to jump to new heights this season.

Manchester United is also in the picture, adding Donny van de Beek from Ajax to its midfield. United's three semifinal losses last season (Europa League, FA Cup, EFL Cup) were a disappointment and the Red Devils will try to build on that in pursuit of Ole Gunnar Solskjær's first trophy with the club.

After an abysmal start to last season that cost Unai Emery his job, Arsenal under Mikel Arteta could finally challenge for the top spots. The Gunners won two trophies over the summer (FA Cup and Community Shield), and if they are able to hold onto goal-scoring machine Pierre-Emerick Aubameyang, the team could finally break into the Champions League spots for the first time since the 2015-16 season.

Tottenham Hotspur and Jose Mourinho will start their first full season together, and it's still unclear where this might go. There were signs that the team would implode under the controversial manager, yet all the pieces seem to be there for Mourinho to succeed. A healthy Harry Kane alongside Heung-min Son, Lucas Moura and Dele Alli is tantalizing, so if Mourinho can muster up a good defense to balance the squad, Spurs could be in for a bounce-back season.

Keep an eye on…

Leicester City may have collapsed out of top-four contention late last season, but there is still a solid squad there that can make a run under Brendan Rodgers. Wolverhampton is also a potential threat to the Premier League's big guns. Having missed out on the Europa League, Wolves' sole focus will be domestic, perhapssnagging a cup trophy along the way.

Perennial mid-table club Everton's season will revolve around the arrival of James Rodriguez from Real Madrid. The Colombian star never quite settled at Madrid or Bayern, but his quality could finally shine as the star of the team.

Sheffield United were a revelation to the Premier League last season after being promoted. The Blades' superb defense and overlapping centerbacks took the league by surprise and ended in a respectable ninth, having competed for the top-six all season. The question now: was this an anomaly or canSheffield United secure its place in the league for years to come? 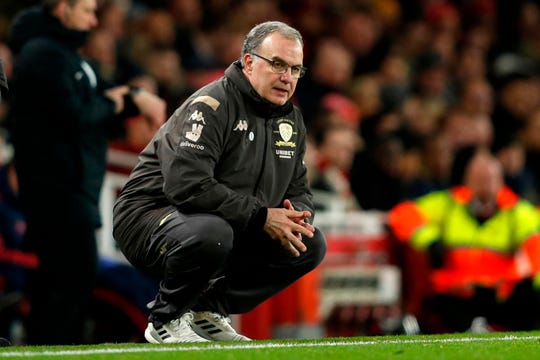 Marcelo Bielsa will be hoping Leeds United can stay in the Premier League after nearly two decades away. (Photo: ADRIAN DENNIS, AFP via Getty Images)

Leeds United is finally in the Premier League after nearly two decades, all thanks to manager Marcelo Bielsa. The fiery Argentine should make headlines throughout the season, but we'll have to see whether Leeds has enough to stay up.

West Bromwich returns to the top flight with a familiar face in charge — Slaven Bilic. The squad has a decent mix of experience and youth, with the added presence of Brazilian starlet Matheus Pereira.

Fulham will hope to avoid its mistakes from the last promotion and try to solidify a permanent spot in the Premier League. Unlike last time – when the club spent big over the summer –  manager Scott Parker will keep the core of the team while adding some depth.