Victoria’s peak racing body will prioritise an audit of horses that have not raced in the past 18 months in response to “horrific images” aired on Thursday night that revealed alleged acts of animal cruelty on a mass scale.

Racing Victoria chief executive Giles Thompson reiterated calls for a national horse register to track the movement of the animals once they have left the racing industry.

“We are sickened by the horrific images that we saw on ABC 7.30 Report last night, particularly the inhumane treatment of horses at the Queensland abattoir,” Mr Thompson said in a statement on Friday morning.

“Abattoirs and knackeries are regulated by state governments and we expect those authorities to ensure animal welfare standards are maintained and compliance is strictly enforced.

“In the meantime, we will be prioritising the activities detailed in our three-year equine welfare strategic plan released this year including an audit of Victorian horses that have not raced in the past 18 months but are not listed are retired with Racing Australia.”

The report alleged hundreds of Australian racehorses were being sent to the slaughterhouse, despite official data from Racing Australia claiming less than one per cent of retired horses – or about 34 horses a year – end up in an abattoir.

Victorian Racing Minister Martin Pakula said the horse racing industry must look at the number of horses that are bred, similar to what the greyhound industry has been doing since ABC exposed acts of cruelty against greyhounds.

“After the live-baiting story broke a few years ago, there’s been a massive focus on how many dogs are bred and how they are rehomed,” Mr Pakula told ABC Radio.

“And nationally, the breeding sector and horse racing needs to look at the number of horses that are bred.”

He also echoed calls by Racing Victoria and Racing Australia for a national horse register to better regulate the industry, conceding there were gaps in the system.

A federal parliamentary committee has been investigating the feasibility of such a register and will hand down its report and recommendations mid-November.

Mr Pakula said “the fact is some” horses end their lives in an abattoir or knackery, but that it was the authority’s “determination” to rehome every healthy retired racehorse.

“Every horse should be traced from foal to the end of its life, that doesn’t happen at the moment,” Mr Pakula said.

Racing Australia chief executive Barry O'Farrell has said prosecutions "should, and I suspect will, occur" following the 7.30 investigation.

Speaking on ABC News 24's News Breakfast on Friday morning, Mr O'Farrell said while he was "appalled" and "shocked" by the two-year-investigation he had absolute faith in state regulators. 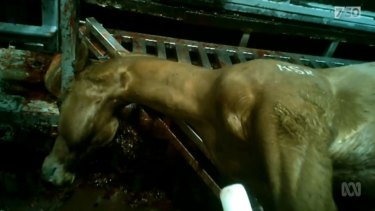 Mr O'Farrell also questioned the actions of activists involved in the investigation, asking why they didn't blow "the whistle earlier".

"Let's not conflate two issues. That facility we saw last night, and those unacceptable practices, is a state abattoir in Queensland. Those practices that I saw, I know from my background in state politics, are serious offences under state animal welfare legislation," he said.

"I think the program last night said the activists had been taking vision for a number of years. Why wouldn't they have blown the whistle earlier to stop this inhumane treatment?"

Elio Celotto, from the Coalition for the Protection of Racehorses, said her group had been watching and recording the daily activities of the Meramist Abattorior, located north of Brisbane, for the past two years.

Ms Celotto told 7.30 that about 4000 racehorses had been killed in the one abattoir alone. The 7.30 report also investigated a number of NSW facilities.