Canberra centre Joey Leilua has suffered a freak eye injury from fireworks while running on to AAMI Park for the NRL qualifying final against Melbourne.

Saturday's match was held up while the Raiders trainer treated Leilua but he was unable to take his place in the starting side and headed to the change rooms. 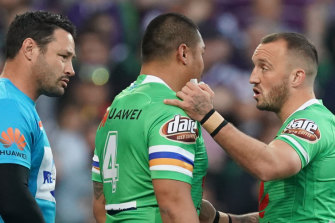 Raiders’ Joey Leilua (centre) had to leave the field injured and missed the first 20 minutes of the qualifying final against Melbourne Storm. Credit:AAP

The Raiders said medical staff were able to remove a piece of black pyrotechnic shell from Leilua's left eye.

Leilua eventually made his way on to the field in the 20th minute when he replaced Nick Cotric.

The Canberra winger copped a boot to his head while attempting to tackle Storm fullback Ryan Papenhuyzen, with blood gushing from face.

He failed his head injury assessment, ruling him out of returning to play.