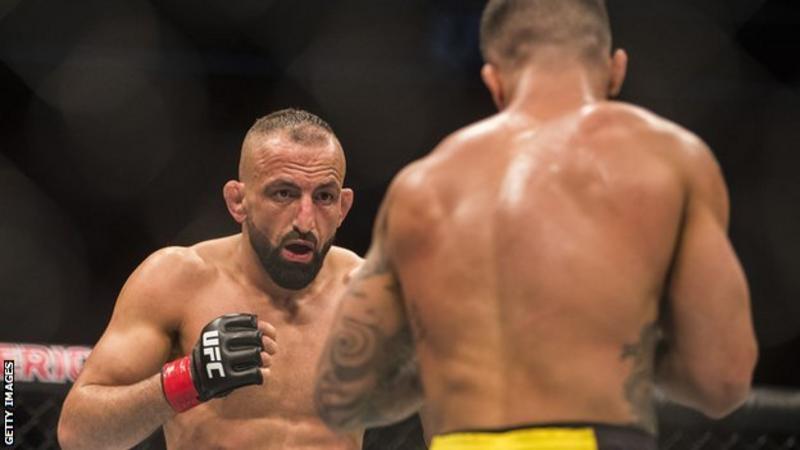 Reza Madadi says he wants to “break the taboo” of Iranians fighting Israelis after coming out of retirement to take on Moshe Ben Shimol in an unofficial exhibition bout in Stockholm in November.

Iranian authorities insist that any sporting figure or team pull out if they end up being scheduled to clash with Israeli opponents.

Iranian-Swedish fighter Madadi, who retired in May to focus on coaching, said he decided to make a comeback in response to Iran ordering Saeid Mollaei to lose in this year’s Judo World Championships in Japan to avoid facing Israeli Sagi Muki.

Iran is now banned from taking part in judo competitions. Mollaei refused to quit, but said he feared for his safety and has since defected to Germany.

“I cannot travel to Iran any more, but I must break this taboo before saying goodbye to the world championships,” said ex-UFC fighter Madadi, who was born in Tehran but lives in Sweden.

“The story of Mollaei’s experience at the Judo World Championships semi-final against Israel’s Sagi Muki made me take this step and end the story once and for all.

“Stockholm is going to have an important message – that religion and politics should not interfere with sport.”

The fight will not be an official UFC match, but Madadi said the outcome is irrelevant.

“The reason I am returning is to show the world that two professional athletes can compete with each other despite cultural, religious and political differences – and then leave the gym like two friends,” he said.

“I have great respect for the athletes who will provide us with the basics of this competition.”

This is going out with a bang. For Reza Madadi – known as the “Mad Dog” – retiring from MMA quietly was out of question.

A controversial figure in many of his UFC fights – not to mention the case of aggravated burglary from a women’s designer handbag shop in Sweden – Madadi is now putting one of sport’s best-known controversies in the spotlight.

For 36 years, Iranian athletes have been ordered to avoid Israeli opposition in international competitions.

Now Madadi is facing an Israeli opponent and wants the world to know about it.

This will be an MMA fight with a difference, though. No punches or kicks will be seen; the emphasis will be on grappling and submission.

Part of Madadi’s point is that no blood will be spilled.