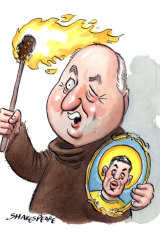 Have faith, my brothers and sisters!
Yes, these are grim times for rugby at the elite level, filled with lawyers, affidavits and  if we can believe Alan Jones – no, really – the end of Western civilisation. But the wonderful thing is that, despite it all, the game goes on, sometimes in the most heart-warming fashion.

And how funny I should say that!

For last Saturday arvo, right at the very moment the Folau hearing was closing after a brutal first day filled with lawyers at twenty paces, objections, cross-examinations and submissions, down at Woollahra No.3 oval two rugby teams had just finished a match and were engaging in one large melee of madness, still out on the field. TFF’s spy, who will remain nameless (let’s just call him Tom Johnston) wandered over to check the commotion to find . . .

Impromptu boat races! Speeches! All the players from both sides with their arms around each other, interspersed! Cheering! And all of it around an enormous silver cup in the middle, the Barbara Streisand Cup – or “Babs” as she is known.

Yes, friends, our famous gay rugby team, the Sydney Convicts, had just beaten their Jewish opponents, Maccabi, in their annual fixture, and all players were sharing the moment with not a care in the world for religion, sexuality or money.

As Johnston, notes: “A timely reminder of all the good in our game.”

Read it and weep, Israel.

You might remember the TFF story of six years ago concerning Kurt Longford, a fellow with autism and on a disability pension, then in his mid-20s living in Narrandera with his single mother. The essence of the piece was how sport had helped him fit in and how, after a long stint playing rugby league with the Bidgee Hurricanes, he had joined Wagga’s rugby league club Brothers, slotting into their reserve grade side and usually coming on from the reserves bench near the end – where he was not only looked after by his own players but also the opposition. The climax of the piece came with the game he played on a Sunday in mid-2013. A reprise:

"See, late in the game, the Brothers bolter, Buddy O’Neill, bursts through one opponent and dodges another before the men from Junee—Laurie Daley country, after all—close in on him like mad things and hit him hard. Still, somehow, Buddy gets away the miracle pass to . . . someone who is looming on his left and charging like a runaway steam train.

It is KURT LONGFORD!

Kurt hauls the ball in, steps left, steps right and, despite the defence again closing hard, smashes over the line and gets the ball down.

A TRY FOR YOUR LIFE!

The Brothers boys go crazy in congratulations, as do the Junee Diesels. In fact, all 25 men on the field crowd round to shake his hand, give him a hug and a pat on the back. Kurt walks back for the kick-off, suddenly the tallest man on the field, as in the stands it is not just his mother who is weeping. For the whole grandstand is rising in acclaim, as he salutes them in turn.

“At the end of the match, won by Brothers, Kurt leads the team victory song in the dressing rooms and then it takes him no less than an hour to get to the car park, as everyone at the ground wants to talk about his try, and he wants to talk to them. At length!

That evening, at Wagga’s Vic Hotel, the Brothers and Junee players gather around, roaring out  I Love to have a Drink with Kurt, while his mother waits in the car outside to get him safely back to Narrandera.”

The nicest thing though? Ricky Stuart – who has a child with autism and with his wife Kaylie has been wonderfully active in that space – heard about both Kurt and the try. 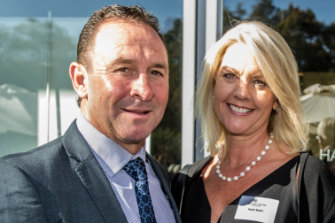 And when the Raiders were in Wagga Wagga last Saturday to play Penrith, who better to get to address them after their victory than Kurt Longford?

The Narrandera man nailed the occasion, too, wowing the respectful Raiders with his own views on league, and the game they had just played. For the record, that part of the world is wonderful for those with disabilities who want to play sport. Former NRL star Mike Eden is with Albury Thunder, who have a disability team called Albury Lightning, and they regularly play against the Wagga Brothers Leprechauns All Abilities (disability) team, just as some of the other teams in Group 9 also have teams for those with disabilities.

Bravo the lot of them, especially you Kurt. And up in Sydney, we are still talking about your try, mate!

Sometimes in this game, rarely, you have a certain amount of space to fill, only to find that when you have said what you want to say, you are a few hundred words short. In the case of Israel Folau, however, the problem is the reverse. I could write 10,000 words on all the hypocrisy, the cant, the sheer venality of much of the blow-back in his support this week. The problem is, you wouldn’t come with me. For, like me, you are probably deeply fatigued and saddened by the whole damn thing. So, let me be tight, light and bright. 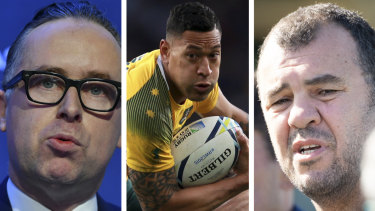 For all those who say that Rugby Australia blew it from start to finish, that they are wrongfully persecuting Folau, allow me to pose two quick questions.

1: Name one other organisation in Australia,  just one,  which would countenance their best-known employee – or even a lower-ranked one for that matter – putting up those kind of posts. Seriously, if RA has got it so wrong, you must be able to give us dozens of examples of organisations for whom it would be fine, yes? Name them. We’re waiting.

2: Name one major corporation happy to sponsor an organisation whose best-known employee puts up those kind of posts. Name it. We’re waiting.

As to all the posturing that this is all being driven by Alan Joyce, the gay CEO of Qantas, complete bollocks. As an inclusive airline that wants to carry everyone, how could they be anything other than strong on this issue. But still you want to argue? Great. After you’ve told us all the other organisations and corporations happy to countenance the Folau situation without blinking, can you tell us why Asics just tore up their sponsorship agreement with the former Wallaby fullback, despite their own CEO not being gay? Put up, or shut up.

The Cauliflower Club Lunch on 6 June at the Westin – honouring the victorious 1999 World Cup winning Wallabies – is gunna be huge, with nearly all of the Wallabies of that era attending. Still tickets available. Google-and-go-go! 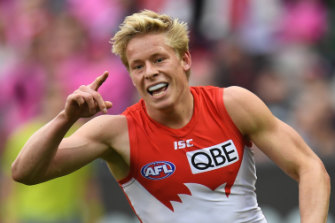 Isaac Heeney, the Sydney Swan from a farm well west of Newcastle, on his mother and father coming down for every Swans home game to sit in the same spot, and his mother getting his attention in a particular way: “She’s got a monster whistle on her.”

CEO of Qantas, Alan Joyce on the Folau debacle: “We don’t sponsor something to get involved in controversy. That’s not part of the deal. We expect our partners to take the appropriate action. It’s an issue for every potential sponsor for Rugby Australia. They have to manage it . . . and shame on you if it happens a second time.”

Alan Jones, descending into the surreally absurd, to depths never before seen, because Folau – last estimated to have cost Rugby Australia $12 million through his posts – has likely been let go: “The Australia that our Anzacs fought for seems to be disappearing before our very eyes  . . . This is not the Australia our veterans fought for.”

Lucas Moura on his hat-trick  in the second-half that sent Tottenham through to the  Champions League final: “Football gives us moments like this that we cannot imagine. We need to enjoy it. Look at me – it’s the best moment in my life, my career.” 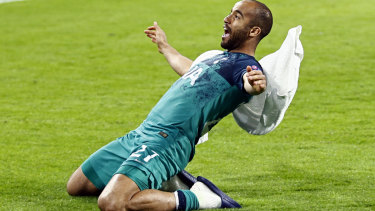 Peter Beattie on whether anything could go wrong with all teams in Brisbane for one round: “I am absolutely confident there will be no issues about player behaviour. The off-season, which we’ve all talked too much about, is now behind us. The reality is everyone understands the standards we set. I think we’ll have 300 ambassadors for the game in Brisbane on their best behaviour.”

Kyle Chalmers at 20 on winning Olympic Gold at 17: “I won an Olympic gold medal before I won a national title, so I did it a bit backwards. Now I’m enjoying winning those medals that I didn’t pick up along the way. A lot of people get Olympic gold then go: ‘What’s left’? For me, there was national titles, Commonwealth Games, Pan Pacs, World Championships . . . there was a lot left to do.”

Red Sox pitcher Nathan Eovaldi on banning the video game Fortnite from their clubhouse: I think there is a time and place for that, too. “Maybe if we were doing a little better maybe we would be doing it, but you can't be losing and playing Fortnite in the clubhouse.”

Brisbane Bronco Tevita Pangai Jnr on the perils of reading everything written about him on social media: “I had my screen time come up every Sunday and I was averaging 10 to 12 hours every day on my phone purely on social media or on the phone. I have gone old school and now it has dropped to two hours, and doing things that are worthy.”

Eliud Kipchoge will go for the moon-shot and try to run a sub two-hour marathon later in the year: “This will surpass everything I have achieved. It will be history for the human family.”

Paul Gallen on calling Queenslanders two-headed: “It went berserk. I got a couple of text messages and calls off the CEO of 'What a legend, you just sold the place out in five minutes'. Some of them do [have two heads].”

Team of the Week

Tottenham and Liverpool. After two extraordinary semi-finals, the  old and traditional rivals meet  in an all-English final of the European Champions league.

Junior Wallabies. SMASHED their Kiwi counterparts 24-0 in the final of the Oceania tournament. It feels like the first bit of good news for Australian rugby since forever, yes?

Latrell Mitchell. The most exciting player in rugby league. 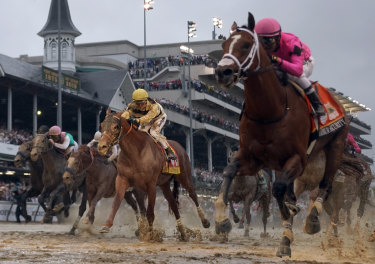 Country House. A 65-1 long shot won the Kentucky Derby after favourite and first over the line Maximum Security was disqualified following a protest.

Boorowa Rugby Club. Established in 1969, the Goldies celebrate 50 years of country rugby on Saturday   May 25 at Boorowa with an old boys match against the Bowral Blacks followed by Boorowa v West Wyalong followed by an evening event to mark the milestone. Google-&-go-go.

AFL Footy Show. And so the end. The AFL version of The Footy Show lasted only a year or so longer than the rugby league version, finishing up after a quarter-century.