There were no “statement” swims, no Olympic records tumbling as each heat rolled past. The big guns of the men’s 100m freestyle were keeping their cards very close to their chest on Tuesday night, with Australia’s defending champion Kyle Chalmers among them.

Few events in the pool can match the electricity of the 100m freestyle and Chalmers has every intention of defending his crown. But Team USA star Caeleb Dressel is the world champion and a pronounced favourite while a host of others, including Thomas Ceccon from Italy, Russia’s Kliment Kolesnikov and Romanian 16-year-old David Popovici, all want a piece of the action. 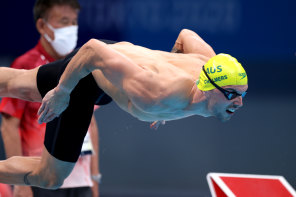 Australia’s Kyle Chalmers advances to the semi-finals of the 10mm freestyle after clocking the third-fastest time.Credit:Getty

It was Ceccon (47.71) who was fastest through to the Wednesday’s semi-finals, with Dressel (47.73) and Chalmers (47.77) hot on his heels. But the heats revealed precisely nothing about who can be the one left standing when the medals are on the line on Thursday.

“It’s funny, everyone is just playing the game. And I’m one of them. I can’t say anything else other than that,” Chalmers said. “It was good to tick the box, tomorrow morning will be a big one with the semi and the 4x200m relay at the end of the program. I’ve just got to get through the rounds, conserve as much energy as I can and sleep well.”

Chalmers doesn’t always give his time to media during the early rounds of competition, often keeping a zen-like focus until the matter has been decided. But he was in a relaxed mood this time, clearly content with his progress, after a pair of lightning relay splits that suggest he’s come to play.

And given the success of the outside lanes at these Games, he suggested there might be some more cat and mouse to come in the semis. It’s a dangerous game but Chalmers knows how to get it done at the major meets after his breakthrough in Rio as a teenager.

“Maybe I don’t need a middle lane. The guy in the 400m free proved he could be in lane eight and do all right,” Chalmers said. “I just have to tick the box, it’s nice going 47s again. It’s only been seven months since my shoulder surgery.”