It seemed rather fitting that up in the rarefied hills of Izu, under the shadow of Mount Fuji, that legend was made.

In this remote outpost of these Games, a super-fast Shinkansen and long and winding bus journey from Tokyo, Jason Kenny did what he does best, riding his bike faster than anyone else and making history.

They take keirin racing seriously in Japan, indeed this velodrome is the national school for the close-quarters sprint race in which thrills and spills are measured equally.

The keirin was invented as a betting sport here and when the money is down, punter’s pal Kenny usually delivers, even if he’d given himself a distinctly underwhelming pre-race report card.

After progressing through the rounds he found himself in the six-man final, team-mate Jack Carlin, the bronze medallist in the men’s sprint, eliminated in the semi-finals.

Kenny sprung clear from rivals with three laps to go and hammered down the power, catching them all napping and he opened up a huge advantage, tactical genius of quite breathtaking audacity.

By the last lap they were closing fast but Kenny was sniffing history and smelling the finish line, live on Eurosport and discovery+.

“We said just before the start, if they’re asleep, shall we just launch one – and that’s exactly what happened,” he said.

“I really didn’t want to go to be honest but I looked, and it was too big of an opportunity not to try, so I just rolled the dice.

“Going into that final, I didn’t really feel like one of the favourites. I wouldn’t have been betting on myself personally but you have to be ready to take your chances and a massive chance came along.”

This ‘Made in Japan’ in discipline seems rather appropriate to move Kenny into sole ownership of more Olympic golds – and more Olympic medals – than anyone else.

Indeed if he and wife Laura – five golds – were a country they’d be ahead of Latvia, population 1.9 million, on the all-time medal table.

It’s rather nice to imagine Kennyland, with a benevolent King Kenny on the throne, a country much in the image of its ruling couple – successful, inspiring and thoroughly down to earth, the national currency quite obviously gold, silver and no bronze.

And it would certainly be a nation admired by its neighbours, note the way the others on the podium, Malaysia’s Mohd Azizulhasni Awang and the Netherland’s Harrie Lavreysen hoisted Kenny on their shoulders after the race.

“It’s special, really special. It just comes down to keep chipping away really and I’ve been really lucky,” said Kenny.

“I owe all of my success to being in the right place at the right time, when British Cycling was just starting to get really successful.

“It’s just nice to be compared to those guys that I grew up admiring, it’s really special to be on the same page as them.

“I’m really proud to be part of what has been another successful Olympics for us as a team. I’ve just been lucky that all of my Olympics have been good ones.”

But there is nothing lucky about Kenny, whose commitment to training is legendary at the Manchester velodrome where he wears a groove in the boards hour after hour, day after day.

And this Olympic cycle has been tougher than most, the extra year and the creeping realisation that time is on your wheel and closing in fast.

“I feel pretty good so I might carry on, if you’d asked me this morning I’d have probably given a different answer,” said Kenny.

“If I’m 33 and getting slower I don’t want a place on the team of someone who is 20 and getting faster. I’ve had niggles and stuff so it might not be up to me at the end of the day, I just might not be able to get to the level I want or the team needs.”

Hoy was famously told in Beijing that if he was still on the team come London, something would have gone wrong. He used that as a motivation to work longer and harder than his younger rivals.

Despite his now peerless status in British Olympic sport, Kenny knows that his wife still boasts the star power, though a heavy fall in the defence of her omnium title meant on this day, he could hog the headlines. 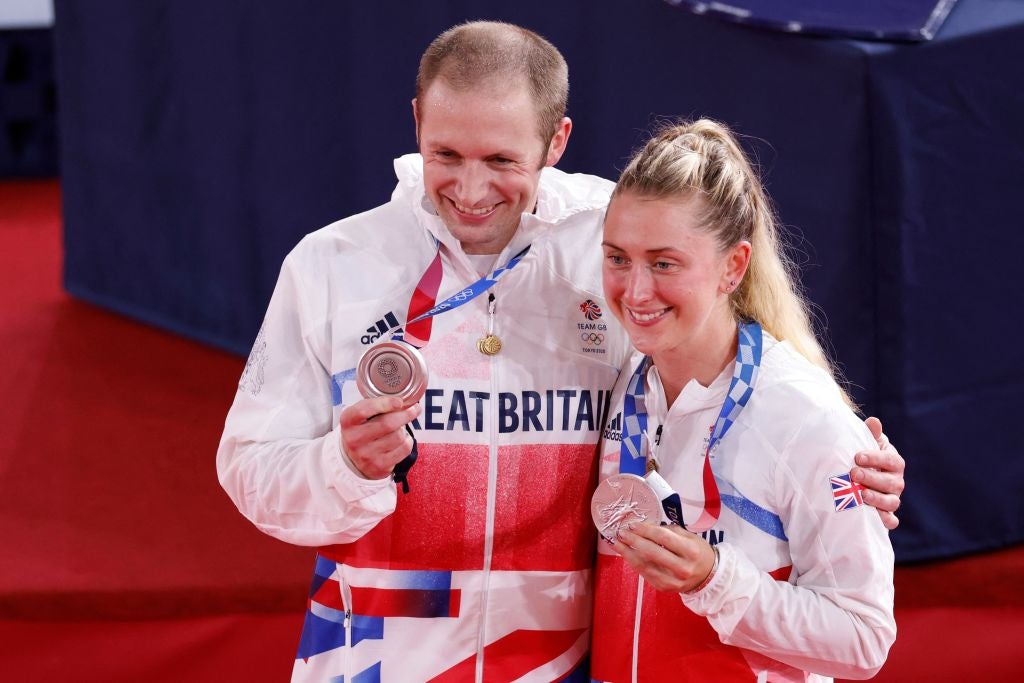 “She’s nicer than me and she’s also infinitely better looking,” he joked. “She’s just a very inspiring character and totally lovely, which I guess is why I married her. I’m just a bit boring and just focus on racing.”

And the bumps and bruises will soon be soothed when reunited with son Albie – just in time to celebrate his fourth birthday later this month.

“Last night Jason said to me, win a gold medal and we can make a clock with 12 golds on it – then he goes and does that, he’s just unbelievable,” she said.

“Having Albie has been the best achievement of my life but there was a moment I thought I’d written my own career off, so to come away with a gold from these Games, it’s been unbelievable. I’ve proved to myself that it’s doable. Hopefully other people debating having a child and a career, I think it proves that you can do it.”

It seems betting against the Kenny family is not a sensible punt to take.

Stream every unmissable moment of Olympic Games Tokyo 2020 live on discovery+, The Streaming Home of the Olympics.