“I’m always confident that in that moment, I’m going to be okay because it’s what I love and live for. More than anything, I just can’t wait to race”.

Dina Asher-Smith beams when she speaks about competing. It’s not just sprinting that makes her smile from ear to ear, it’s the art of competition that drives her.

The thought of standing on the start line next to the best in the world and racing against them isn’t daunting for Asher-Smith, it’s exhilarating. She’s excited by the prospect of all eyes being on her and that years of work will come down to a matter of seconds.

Asher-Smith is the fastest British woman in history. She’s the reigning world 200m champion and a 100m world silver medallist. At 25-years-old, she is Team GB’s athletics captain and when Asher-Smith is on the start line of a major final, there’s no other place she would rather be.

It’s fortunate then, that Asher-Smith’s parents were always trying to find ways to expend the energy of their bubbly child and that a friend asked her for a favour at a young age.

“I was always running around and causing mischief,” Asher-Smith told Judy Murray on Sky Sports‘ Driving Force. “They [my parents] always had me taking part in loads of different clubs and sporting activities.

“When they set up a running club at primary school, my friend asked me to go with her because she really wanted to go. I just thought that running didn’t really appeal to me; I thought that you were just running around and you weren’t getting points or anything like that!

“Then, she said if I went with her, she’d get me an ice cream from the van after school. That clinched it, but I just thought that I’d go with her for the first time because she was a bit nervous.”

In signing up for that first session, Asher-Smith had inadvertently put her name forwards to represent her school at their local cross-country competition. It was at Crystal Palace and it would turn out to become the first competition of an illustrious athletics career.

On that day, Asher-Smith came fifth out of around 400 children. She went home with a certificate, a trophy, a new game that her mum had promised her and the feeling that she might just do it again.

Her performance, and also you suspect her personality, meant that she was spotted by some athletics coaches and invited to go to a track. Indeed, the track that Asher-Smith started to train at – Norman Park Athletics Track – is the one where she still trains at now.

Not only did Asher-Smith find her track at an early age, but she also found her coach, John Blackie.

“When she came along it was very evident, immediately, that she had some talent,” Blackie said. “It was very much untapped talent at that stage, though.

“We knew that she would be a very good athlete, but what we didn’t know was how she would turn out and what her events would be. She was pretty good at pretty much everything she did.”

Blackie, who Asher-Smith says she just knew as ‘the boss’ in the early days, set about looking after this young athlete in the right way. He knew the importance of making things fun, involving her parents, and ensuring that she didn’t take on anything too soon.

“With all youngsters you don’t want to push them into things that they might not stay in,” he said. “So, you do everything. Dina did everything all of the time.”

With 10.85 and 21.89, 2 world leads, 3 European golds, finishing 2nd in the Diamond League and a gold and bronze from the Commonwealth Games… it’s safe to say that 2018 has been an incredible season! pic.twitter.com/j1wiu4uRgD

Asher-Smith’s progression through the ranks was a natural one, and as expected with Blackie’s philosophy, it was one that wasn’t forced or pressured. She started to work more with Blackie and moved into representative athletics.

Asher-Smith competed throughout her teenage years and said that the fact that Blackie was a father of girls, helped them both to navigate that time. No topics were off-limits, instead physical changes, menstrual cycles, moods and more, were all discussed and addressed.

“Lots of people shy away from it but John never did that,” Asher-Smith said. “I can have so many open discussions with John and if I say to him that I’m having cramps, he’ll often say that if you’re in that much pain let’s just adjust the session, the week etc.

“I shouldn’t say it’s a breath of fresh air, because it’s said that it is, but, for a male coach [to have that understanding and openness] it is. There are some that do, but not all. Obviously, it’s a huge factor in high-performance sport.”

Colin Jackson on the importance of a coach

“As the athlete, you have the confidence of knowing that there’s somebody who has got your back. A person who will do everything they can to make your life easier.

“I used to tell people that Malcolm [Arnold] was my second dad. In reality, he saw me more than my dad did because I spent so much time with him.

“Like Dina and John, we were together throughout my teenage years and beyond. He saw me at my grumpiest to then growing into a champion athlete.” 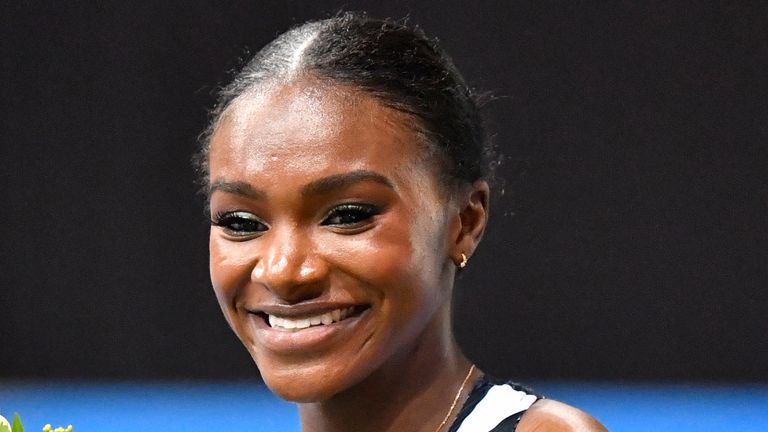 As a result, the 25-year-old became the first British athlete to win three medals at one world championships and the lead into an Olympic Games the following year looked promising.

The news of the Games’ postponement and the arrival of a global pandemic could have derailed Asher-Smith and Blackie. Instead, they both looked at it as an opportunity.

“In track and field, you’re often pushing towards the next championships and the next goal, and because we work in such rigid training blocks, there’s often very little room for change.

“So I thought, being in this pandemic and with an extra year before the games, let’s add in all of the stuff that we didn’t add in after the World Championships.”

An element Asher-Smith added to her life was seeing a sports psychologist, and she’s keen to be open about her reasons why.

“Seeing a psychologist doesn’t have to be because there’s a problem,” Asher-Smith said to Gary Neville on Sky Sports’ The Overlap.

“I didn’t go because I had an issue or a problem, for me it was part of my performance. Where I want to go and what I want to achieve, we’re getting to the pinnacle, and it’s making sure that everything is geared towards that.

“It would be unwise of me to leave something so big, like your mentality, to chance. Even though I don’t think that it’s up to chance but leave it in the wind.”

Now, it’s game time for Asher-Smith and Blackie, as they strive for individual 100m and 200m success in the Tokyo.

She arrives in Tokyo having been unbeaten this season, but having pulled out of the British Grand Prix on July 13 due to a tight hamstring. The withdrawal was as a ‘precaution’ and in a recent post on social media, Asher-Smith looked to be sprinting freely and hard in training.

“I’m really excited,” Asher-Smith said. “I love competing. The thing that I always love about sprinting is the adrenaline rush that you get.

“When the gun goes off, is all about answering the question, what do you have? How much nerve do you truly have? It’s about that moment; if not now, when.

“That’s the part I love about racing, because I love that kind of thing. I’m always confident that in that moment, I’m going to be okay because it’s what I love and live for. More than anything, I just can’t wait to race.”